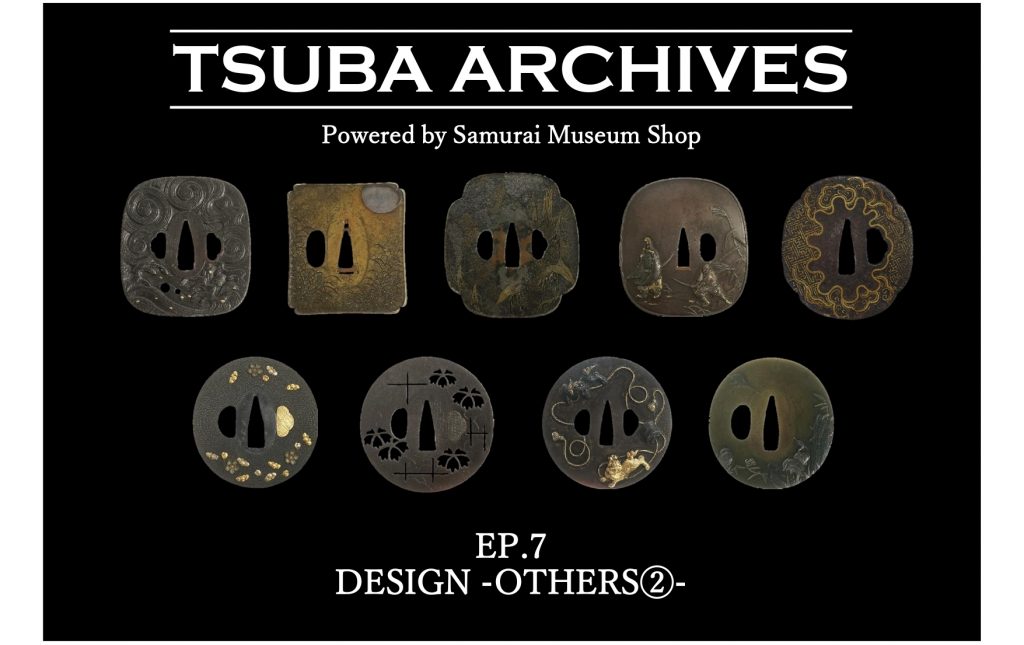 From the previous time, we treat other designs. We hope you will also enjoy this chapter. 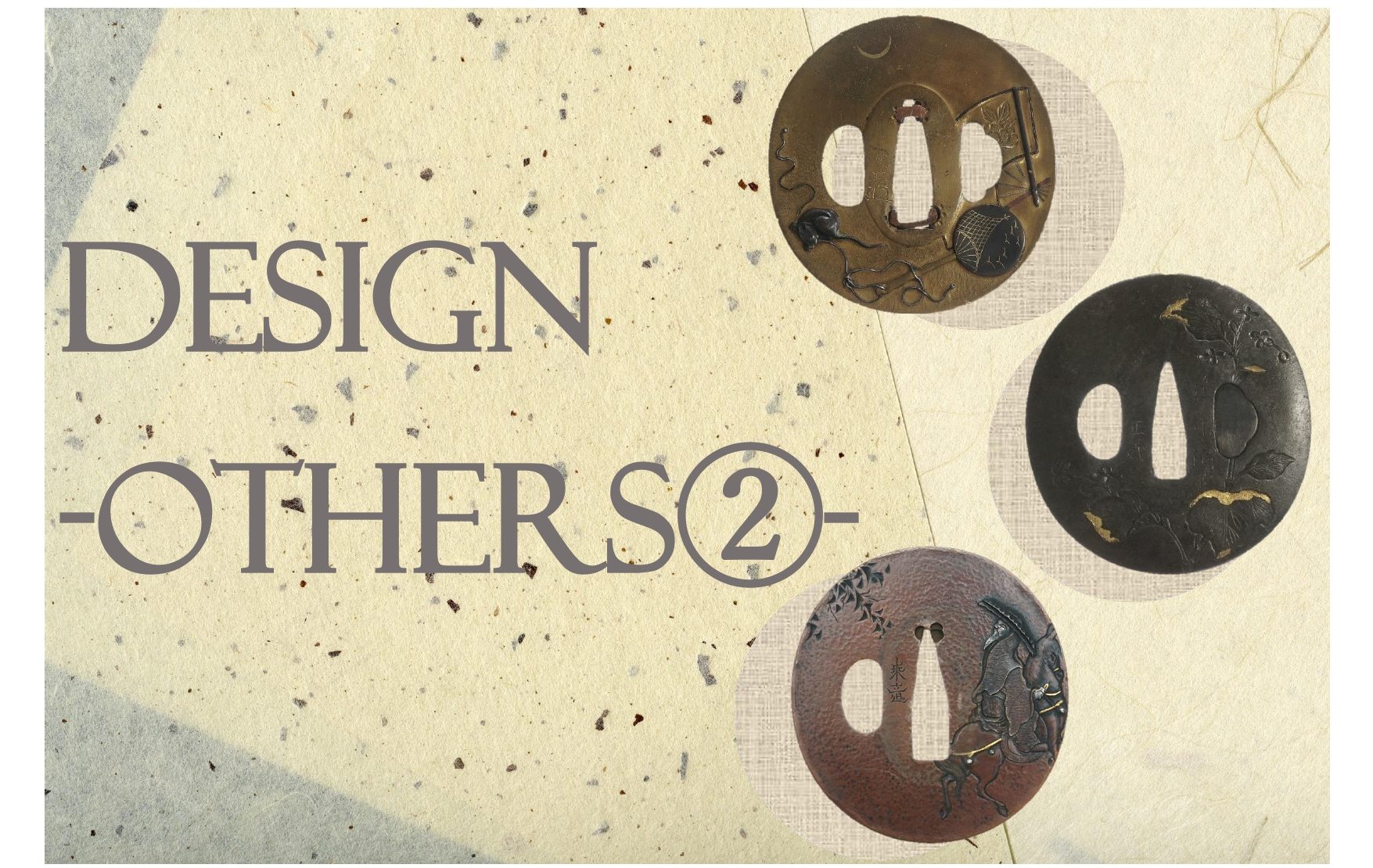 The sun and the moon have been treated as objects of worship since ancient times. Some people considered them the symbol of authority. The moon pattern has various shapes depending on the waxing and waning of the moon: full moon, half-moon, crescent, or hazy moon. There is also the idea: as the moon changes its shape depending on its fullness, it represents growth and development. Moreover, the moon is a classic design that symbolizes autumn: the combination of a moon with rabbits, deer, autumn grass, waves, etcetera.

This motif has been favored as an auspicious pattern representing development and prosperity. During the Heian period (794-1185/1192), aristocrats enjoyed elegant plays with fans, and they appreciated the fan itself as a noble item. A fan has a characteristic shape, and it is called Suehirogari (末広がり) in Japanese. Based on the idea that this shape implies a perspective of the future, people appreciate this design. The fan pattern also represents wealth because it was once available only for high-ranked people. In addition, people enjoy drawing various motifs such as animals, plants, geometric patterns, and auspicious patterns on the fan surface. That might also be why the fan motif is popular.

Since ancient times, arrows have been used as a weapon, which is the original purpose of this item. Additionally, each home displayed decorated arrows wishing that it would exorcize evil spirits in the house. This talisman is called the Hama-Ya (破魔矢) in Japanese, and this custom is still kept today. As an arrow goes straight forward powerfully, lots of Samurais loved the arrow pattern.

There are also other types of arrow designs such as the Yabane (矢羽根, wing part of an arrow), the Kabura-Ya (鏑矢), etcetera. The Kabura-Ya is a type of arrow attached to the Kabura (鏑, a kind of weapon) to the tip of an arrow. The Kabura-Ya whistles when it is shot. Therefore, it was used as a signal on the battlefield to notify the start of a battle. We could find it in traditional events such as Yabusame (流鏑馬, horseback archery) in Japan. This convention also shows us the relationship between the Samurai culture and the arrow.

It is the combination of several treasures. Some people believed these treasures would bring good fortune.

Each item has a meaning. For example, the Kakure-Mino (隠れ蓑, straw raincoat) and the Kakure-Gasa (隠れ笠, hat that hides face) would protect us from danger or illness. The Chouji (丁子, precious medicine, fragrance, dye) is a plant, and it represents happy marriage, good health, and longevity. The Uchide-no-Koduchi (打ち出の小槌, mallet of good luck) would fulfill one’s wish, or defeat one’s enemy. It is well-known that the Daikokuten (大黒天, god of wealth), who is the member of the Shichifukujin (七福神, the Seven Gods of Good Fortune), brings this mallet. The Makimono (巻物, scroll) is a book that gives us much information; therefore, this motif symbolizes knowledge and wisdom. The Gunbai (軍配, Sumo referee’s fan today) would settle the battle. The Fundou (分銅, weight) is the symbol of wealth.

There are also other items in the Takaradukushi design. It would be enjoyable that find each motif and check its meaning.

There are several theories about the origin of this design. According to an idea, it was modeled on the shape of the Magatama (勾玉, comma-shaped bead), or it was based on the swirling of flowing water. It is also said that the Tomoe pattern comes from the Tomo (靹). It is a tool attached to the inside of the left wrist when shooting a bow to prevent the bowstring from hitting the arm or bracelet after shooting an arrow. The Tomoe pattern represents water, so that people treated it as a talisman to prevent fire. It was often applied to the roof tiles of shrines. It is because people believed the Tomoe design would exorcize evil spirits. The design of two Magatama-shaped commas is called Futatsu-Tomoe (二つ巴), and the pattern with three commas is called Mitsu-Domoe (三つ巴).

This motif also has been used for family crests. For example, Shimizu Muneharu (清水宗治, 1537-1582) used the Mitsu-Domoe design. He fought against Toyotomi Hideyoshi (豊臣秀吉, 1537-1598) for he served. However, the battle situation was not good, and Muneharu thought he could no longer win. Then he decided to obey Hideyoshi’s request. He saved the lives of his subordinate soldiers by committing Hara-kiri (腹切り, also known as Seppuku, ritual act of killing oneself by cutting one’s stomach open with a sword). A theory says the idea that the Seppuku was an honor of Samurai was taken root among Samurais due to Muneharu’s graceful attitude.

By focusing on a design in the Tsuba, you could touch on the history of the Samurai. We would say it is one of the ways to appreciate sword mountings.

We are going to continue the new episode from different perspectives. We will see you in the next episode.