Episode 1: The Charms of TSUBA 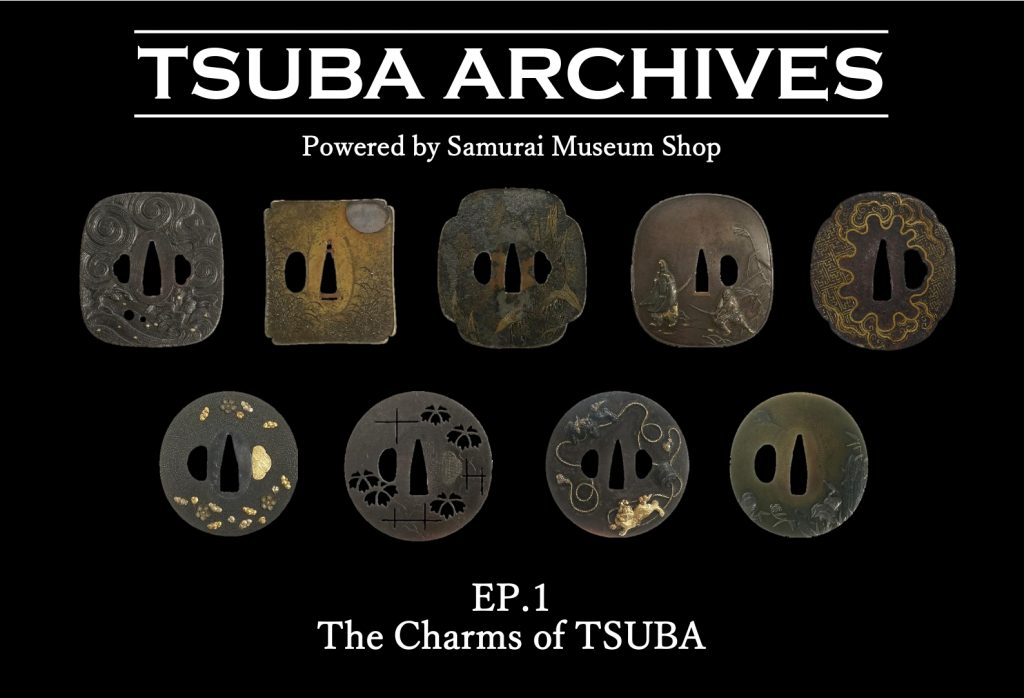 Welcome to the Tsuba Archives. We appreciate your interest in antique Japanese sword mountings. As the title mentioned, this time, we would like to introduce the charms of Tsuba. We are planning to upload more articles by dividing them into various sections. Please kindly look forward to our next episodes. For the first episode, we touch on the introduction of the Tsuba Archives. 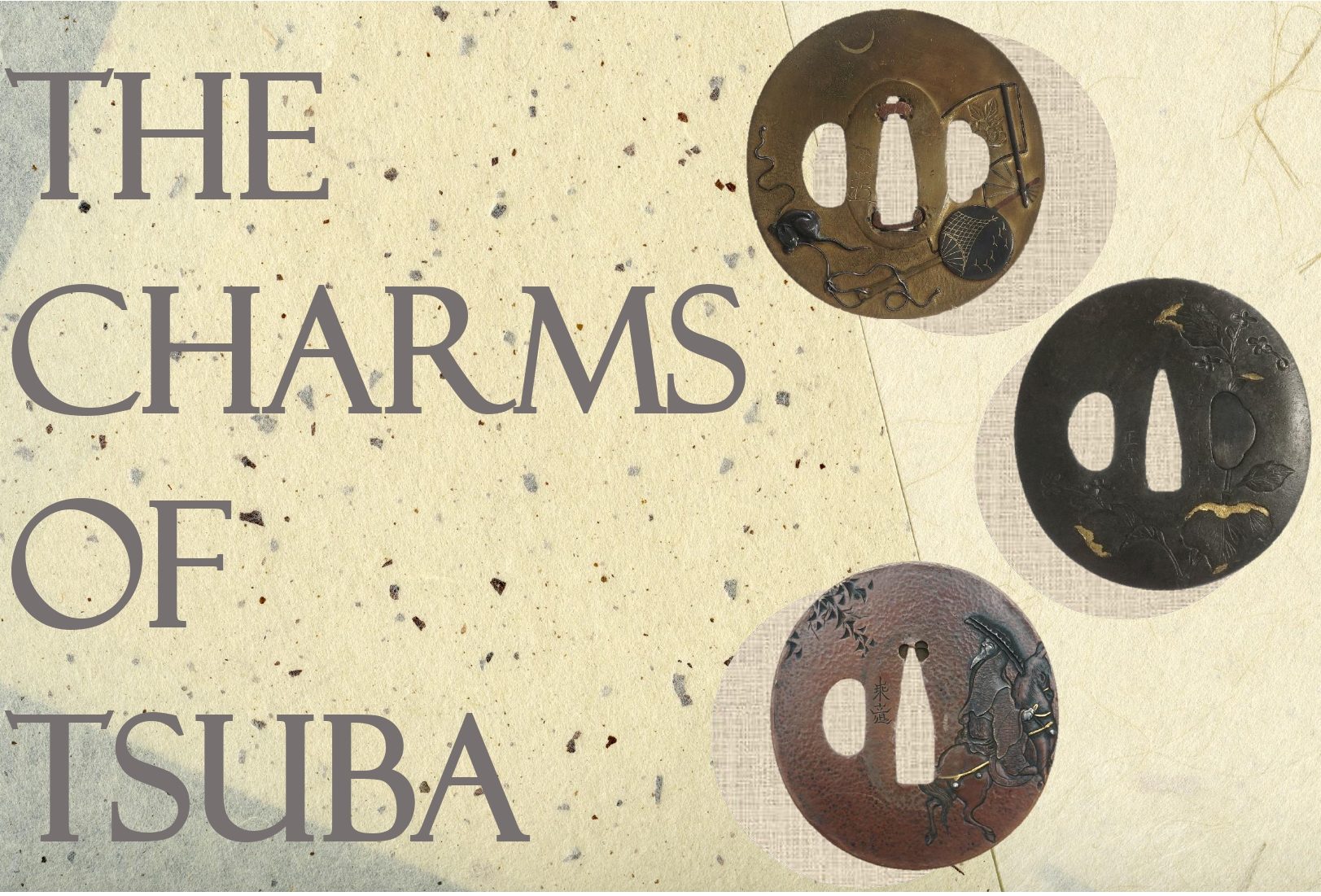 Why are we attracted to the charms of Tsuba?
Tsuba is one of Japanese sword mounting. It is initially equipped with the Japanese sword for practical reasons; to protect the user’s hand when he grabs his sword or prevents the user’s hand from slipping towards the blade part when he hits his enemy. However, Tsuba has attached importance to its decorativeness, and it has been developed as an essential sword outfit that combines utility and beauty since the Edo period. Western swords also have guards, but many of them are connected with handles; therefore, they look different compared to the Japanese handguard, Tsuba. People expected that Tsuba fulfilled two roles: practicality to attack enemies and protect users, and Tsuba should not have lost its good looks. In each area and each period, Tsuba had been enhanced its artistry through the efforts and the ingenuity of numerous Tsuba artisans.

As mentioned above, Tsuba was mainly created to shield hands. So that craftsmen had to pay attention to several points.

-It should be strong enough to protect the user’s fists and break even the enemy’s blade.

-It should have moderate weight to make it easier to swing the sword.

-It should not be too big because users put their swords on their waists.

-Seppadai (切羽台, the hole opened in the middle of Tsuba to put sword) should not be engraved with any designs or signature. And so on.

Although creators should have respected these rules for maintaining practicality, the deep metal tones and textures were created by Tsuba makers’ outstanding technology, and the various designs are intriguing. 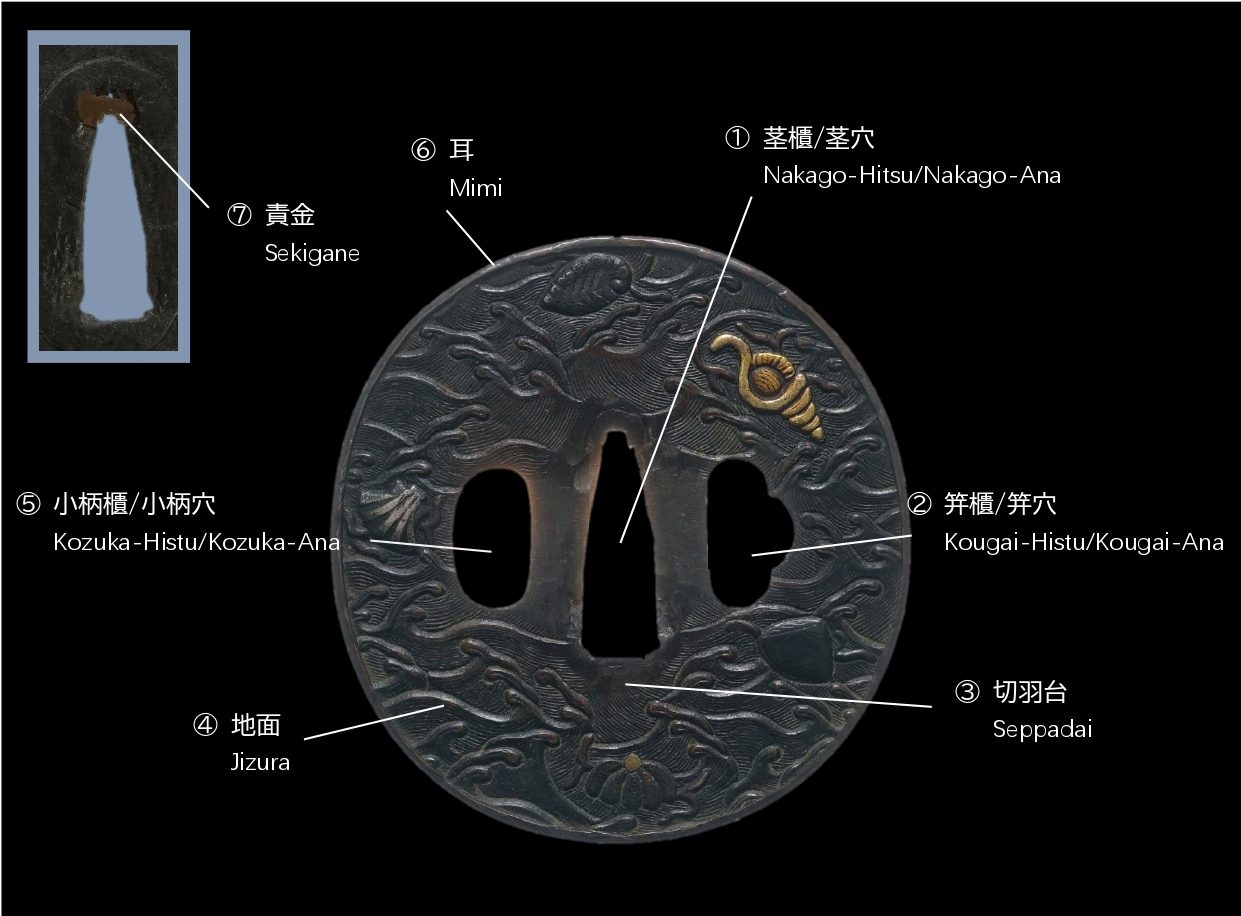 ①Nakago-Hitsu/Nakago-Ana (茎櫃/茎穴)
A hole to thread Nakago (茎, the part of the blade that is covered with the handle).

②Kougai-Hitsu/Kougai-Ana (笄櫃/笄穴)
A small hole that is put to prevent the Kougai will touch the Tsuba. Usually, Kougai is stored at the front of a handle. Therefore, the Kougai-Hitsu is arranged at the right side when we see the Tsuba from the front. The shape of Kougai-Hitsu is called Suhama-Gata (州浜形), which is likened to the form of a beach. Some Kougais have a projection for earpick. There is also Wari-Kougai (割笄, bifurcate Kougai). It is said that is why the Kougaihitsu has this shape.

③Seppadai (切羽台)
The part touches Seppa (切羽, a thin metal plate that pinches either side of the Tsuba). Seppadai is placed around the Nakago-Hitsu (center hole). It is avoided to carve patterns, but the signature of its maker or the year of production are carved here.

④Jizura (地面)
The surface (or could be said ground) of metal crafts such as Tsuba.

⑤Kozuka-Hitsu/Kozuka-Ana (小柄櫃/小柄穴)
A small semi-circular-shaped hole that is put to prevent the Kozuka will touch the Tsuba. Usually, Kozuka is stored at the backside of a handle. Therefore, the Kozuka-Hitsu is arranged at the left side when we see the Tsuba from the front.

⑦Sekigane (責金)
A soft metal such as copper is fitted into the inside of the top and bottom of the Nakago-Hitsu. Sekigane is used to attach the Tsuba to the blade without looseness. So that Sekigane has a crucial role as a cushioning material. Especially an iron Tsuba, since it is the same iron material as the sword, it was essential to use a different metal material to prevent damaging the blade.

We hope you enjoyed this article and have now captured the overview of Tsuba. We deal with various kinds of Tsuba online. You can just click the embedded links on these images below, or visit HERE to have a look at all products. We are looking forward to serving you out there anytime.