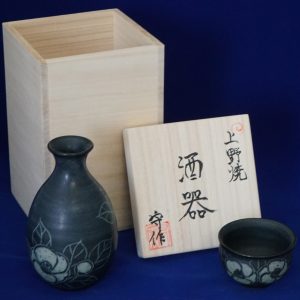 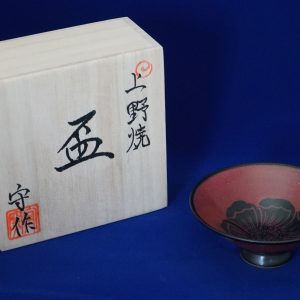 You can find a beautiful cherry blossom design. They would like a couple to enjoy drinking sake with this sake cup. They used a different type of firing techniques.

Agano Yaki (Agano ware)
Place of production: Fukuchi town, Fukuoka prefecture
The circumstances: After battle of Sekigahara, Edo Shogunate forced relocation of a Daimyo to a different domain. Hosokawa Tadaoki became the new Daimyo of Buzen. Hosokawa clan invited Korean potter Son-Kai to make potteries. Hosokawa Tadaoki learned Sado directly from Sen-no-Rikyu and well known as most particular Daimyo of Sado. So the Agano-Yaki were refined to satisfy Tadaoki’s eye. Agano-Yaki is also one of Enshu 7 kiln liked by Kobori Enshu, the noble Japanese Sado artist. The theme of Agano Yaki is ‘simple, silence’ as Wabi-Sabi tea ware. You can take a look on green color by using copper graze. Vortex pattern called “Hidari-Tomoe” is engraved on base. This was caused spontaneous when forming the clays but also became to be used as the sign of Agano-Yaki potters.