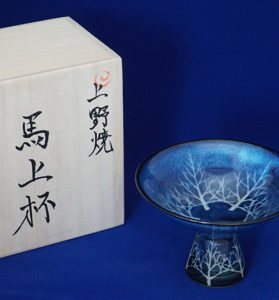 The story: After the battle of Sekigahara, Edo Shogunate forced Daimyo Hosokawa Tadaoki to be relocated to a different domain. And, he became a new Daimyo of Bizen. Hosokawa clan invited a group of Korean potters led by Son-Kai to make potteries. Hosokawa Tadaoki learned Sado(Tea ceremony) directly from Sen-no-Rikyu, one of the most famous tea master. He was also known to be very particular about Sado. So the Agano-Yaki were refined to satisfy Tadaoki’s eye. Furthermore, Agano-Yaki was selected as one of Enshu 7 kilns, where Kobori Enshu(小堀遠州), the noble Japanese Sado artist picked his seven favorite kilns.

Agano Yaki reflects on the concept called “Wabi Sabi” meaning simplicity and silence. What makes this pottery so outstanding is the green colored glaze made from copper. There are various kinds of designs and techniques to create Agano-Yaki. Vortex pattern called “Hidari-Tomoe” is engraved on its base. It is believed that this pattern was caused naturally when a potter carved the foot that supports the body of his pottery, but eventually, the pattern became the signature of Agano-Yaki potters.