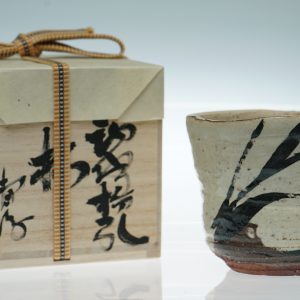 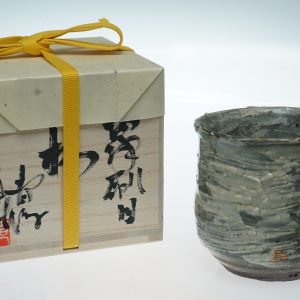 Karatsu Yaki (Karatsu ware)
Place of production: Karatsu city, Saga Prefecture
The story: Karatsu means “The port to Tang China dynasty”. The pottery production was introduced by potters from Tsushima Island and Iki island emigrated to this prefecture in the ancient ages. And, the more diverse styles of Karatsu-Yaki were produced after Korean potters introduced the technologies of a kiln, potter’s wheel, and glaze. A few examples are E-Karatsu, Chosen-Karatsu, Madara -Karatsu, Mishima-Karatsu, Kobiki-Karatsu.
Karatsu-Yaki has been well- known for its familiar shape since the old age. Many tea connoisseurs were fond of this pottery so much that a proverb was made, which is “first-Raku, second-Hagi and Karatsu as a third”. Also, later the reputation of Karatsu-Yaki became nationwide to the point where it was mentioned as “the top of the west pottery is Karatsu while the top of east pottery is Seto. Karatsu-Yaki, whose shape is simple yet relaxed, holds the new idea of pottery where a potter can freely paint flowers, fish, birds and so on. It also has the spirituality of wabi, which originates from its unique shape. Today, there are about 50 kilns in Karatsu city, where many potters try to develop new types pottery while keeping its traditional style throughout the flow of the times.