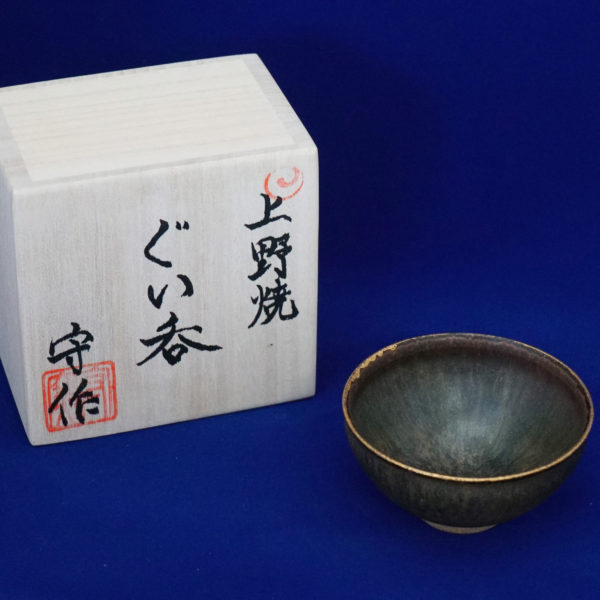 Samurai had sake with this type of cup while riding his horse. Famous warlord, Kenshin Uesugi is said to have enjoyed drinking sake on his horse.

Agano Yaki (Agano ware)
Place of production: Fukuchi town, Fukuoka prefecture
The circumstances: After battle of Sekigahara, Edo Shogunate forced relocation of a Daimyo to a different domain. Hosokawa Tadaoki became the new Daimyo of Buzen. Hosokawa clan invited Korean potter Son-Kai to make potteries. Hosokawa Tadaoki learned Sado directly from Sen-no-Rikyu and well known as most particular Daimyo of Sado. So the Agano-Yaki were refined to satisfy Tadaoki’s eye. Agano-Yaki is also one of Enshu 7 kiln liked by Kobori Enshu, the noble Japanese Sado artist. The theme of Agano Yaki is ‘simple, silence’ as Wabi-Sabi tea ware. You can take a look on green color by using copper graze. Vortex pattern called “Hidari-Tomoe” is engraved on base. This was caused spontaneous when forming the clays but also became to be used as the sign of Agano-Yaki potters.