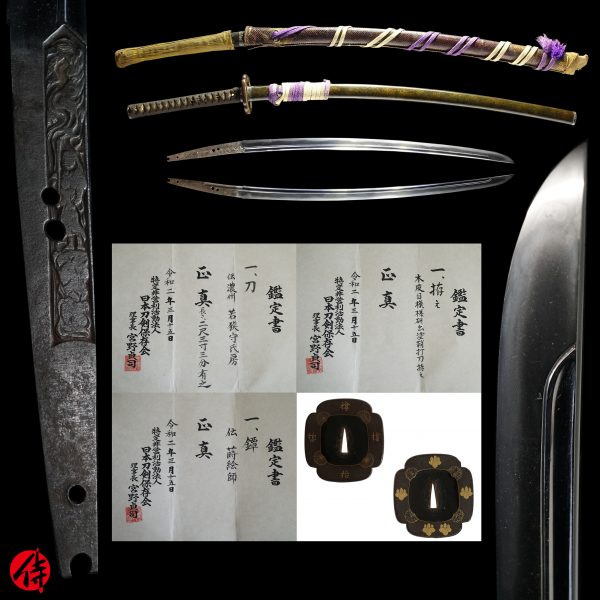 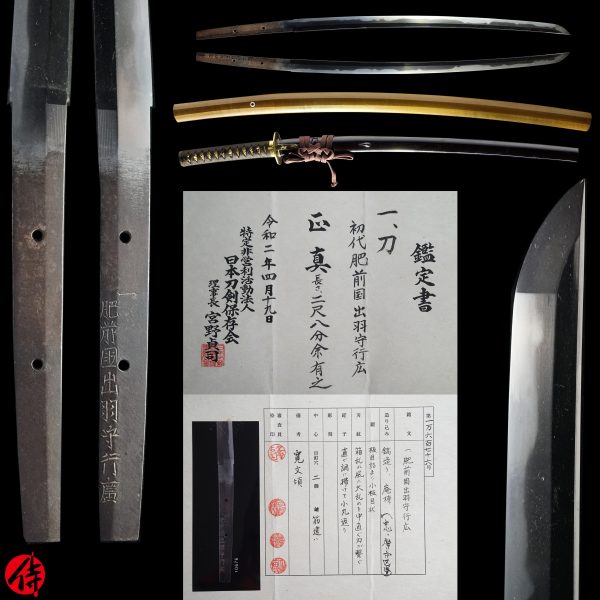 Antique Japanese Sword Tachi Signed by Sukesada with NBTHK Hozon Certificate
【Description】
This blade has a signature of Bizen Osafune Sukesa on one side and the date(The third year of the Eisho period in August on the other side. Those who forged swords in Bizen province at the end of the Muromachi Period(1492-1569) are called Matsu Bizen. Sukesada school was one of the most famous ones and flourished for generations among Osafune schools. There were various styles forged by the generations of Sukesada during this period. There were about 60 swordsmiths who used Sukesada as his maker’s name. One of the most famous ones is Osozaemon Jo Sukesada whose father is Hikobeinojou Sukesada. Based on the signature,we think this blade was forged by Hikobeinojou Sukesada.

The swordsmiths in Bizen produced many swords as it was in the middle of the Sengoku period(Warring state period), and the demand for swords increased among strong feudal lords. The length of this blade is efficient and must have been easy to handle back then. It also comes with a beautiful set of Tachi style Koshirae. It would be nice to have a piece that was forged in the warring state period, when there was so much rivalry between warlords.

Hamon：The blade pattern created by the tempering process. It has Gunome-choji(互の目丁子) Hamon.

Jimon：Visible surface pattern on the steel. It has Mokumehada(木目肌）Pattern and you can find some Jinie(地沸え）. 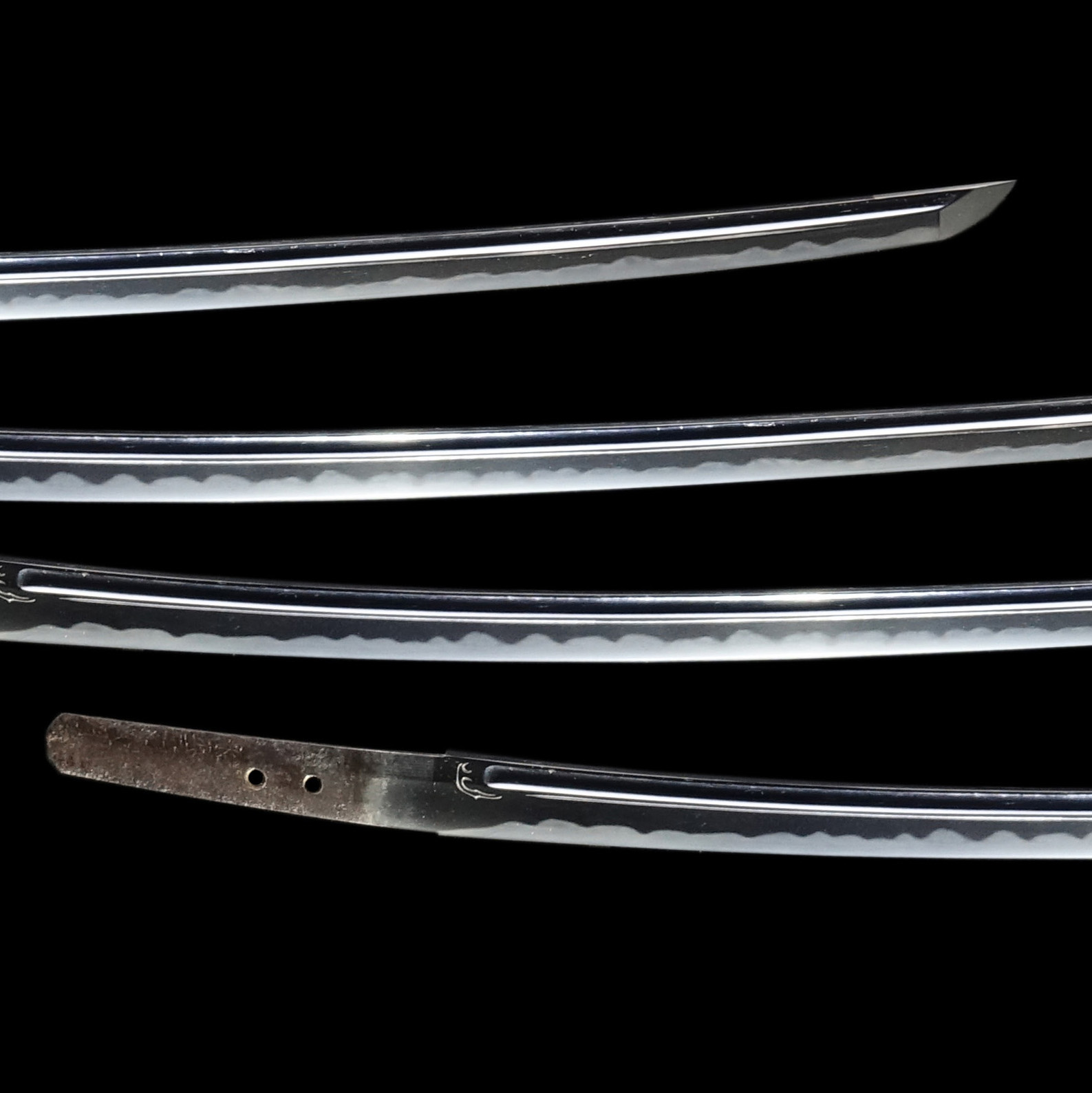 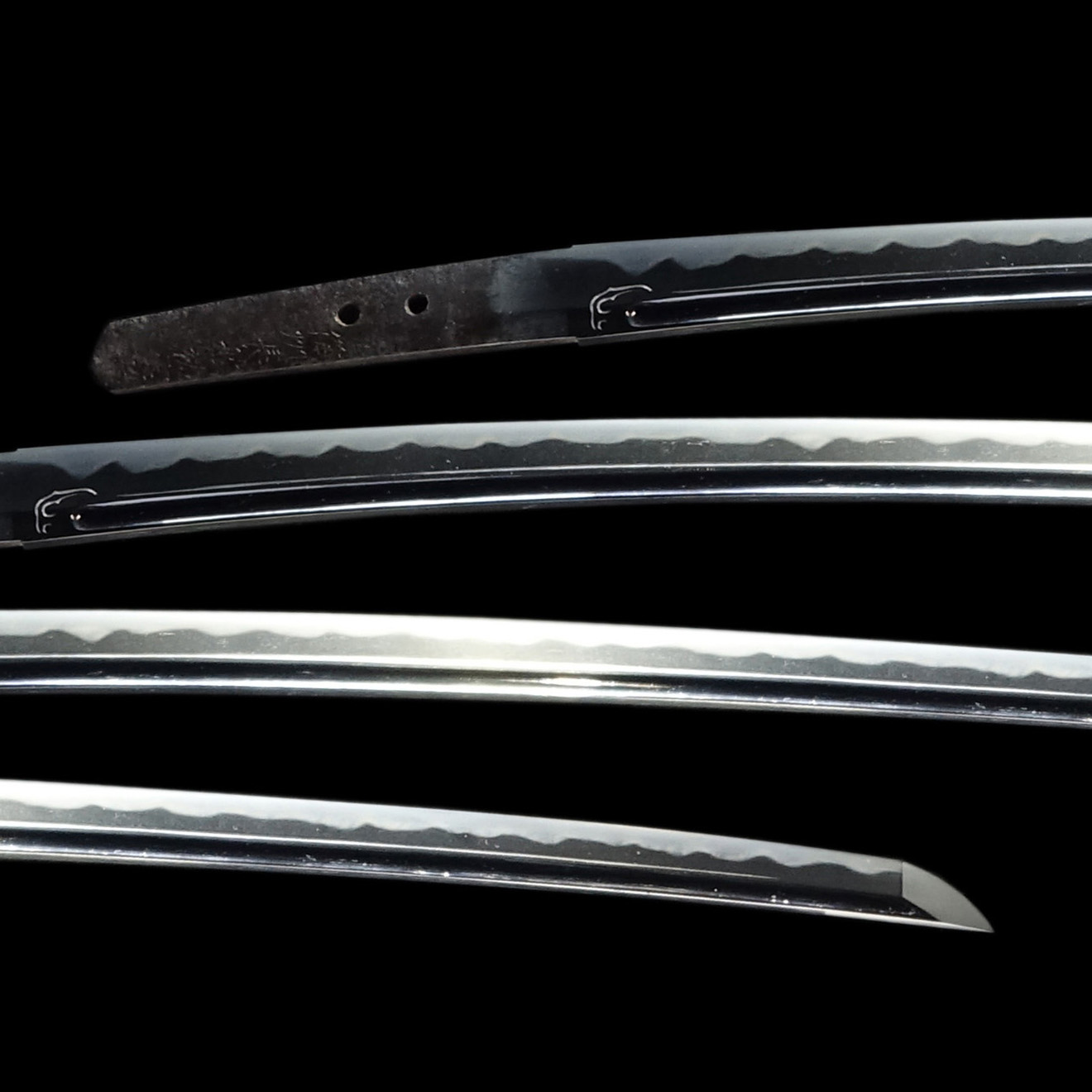 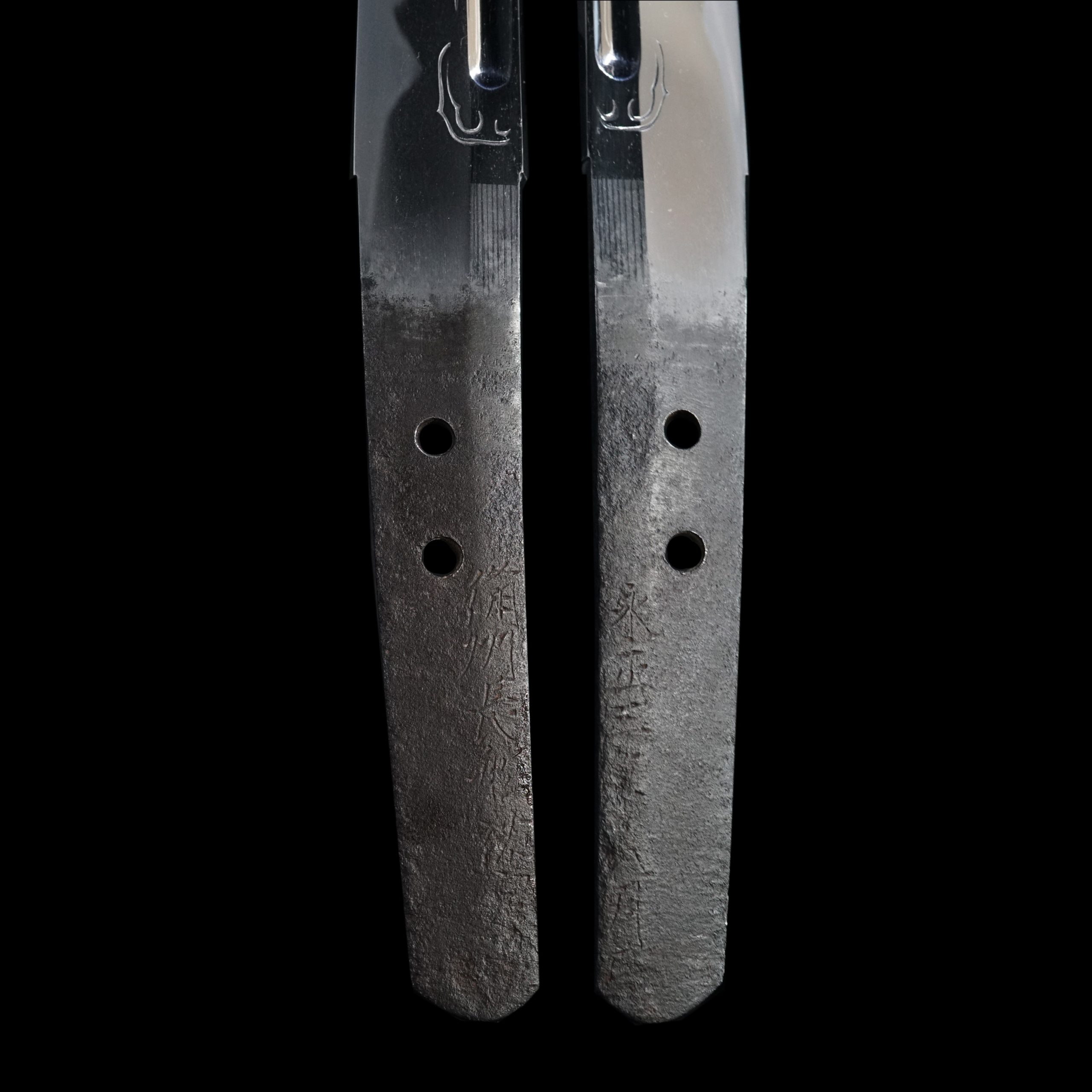 Fuchi-Kashira：A pair of matching sword fittings that cover the upper and bottom parts of its sword hilt.
Plant pattern is inlaid with gold on the side of Fuchi and Kabutogane of Kashira. An animal which is inlaid with gold looks similar to a kind of bird can be found at the Sarude of this Kashira. 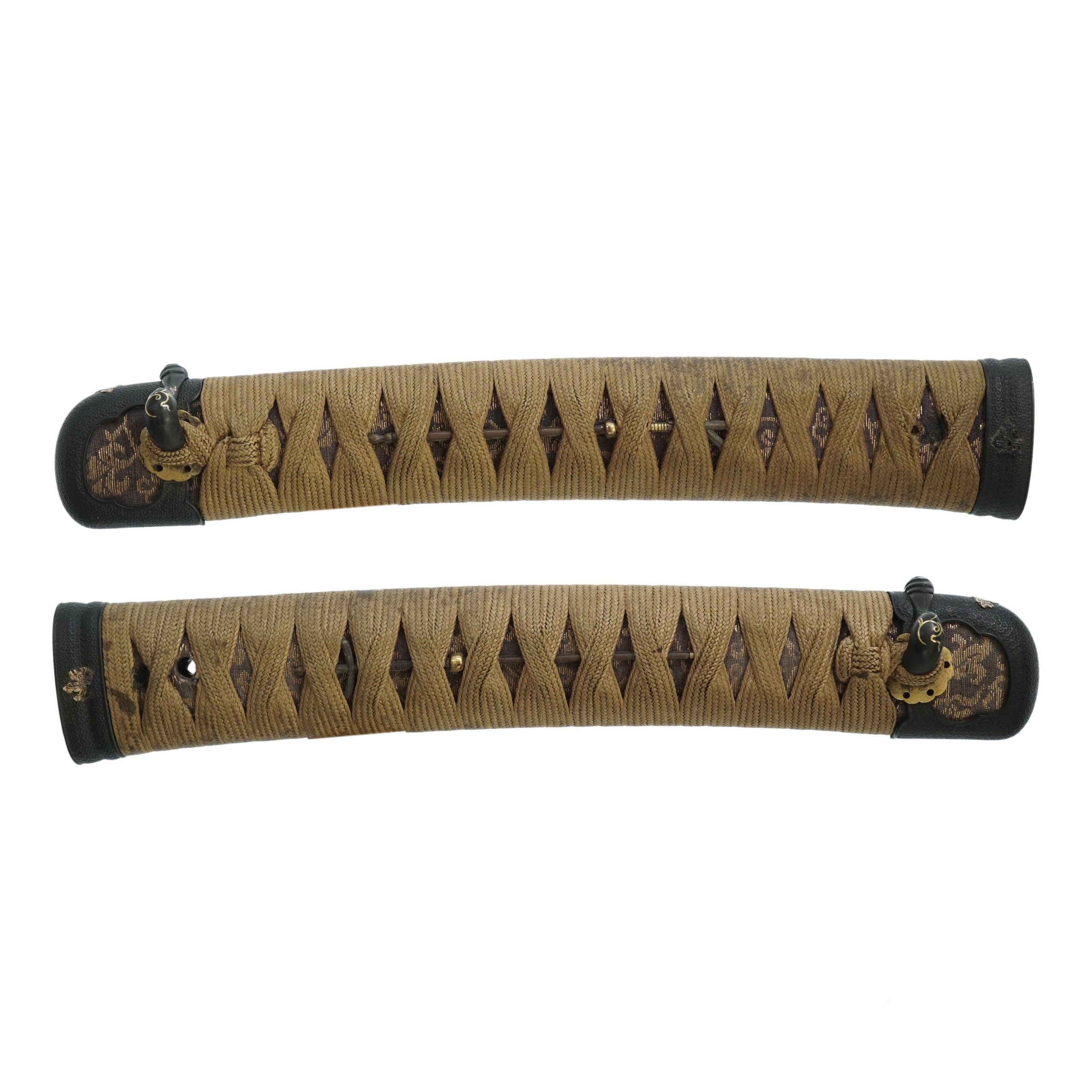 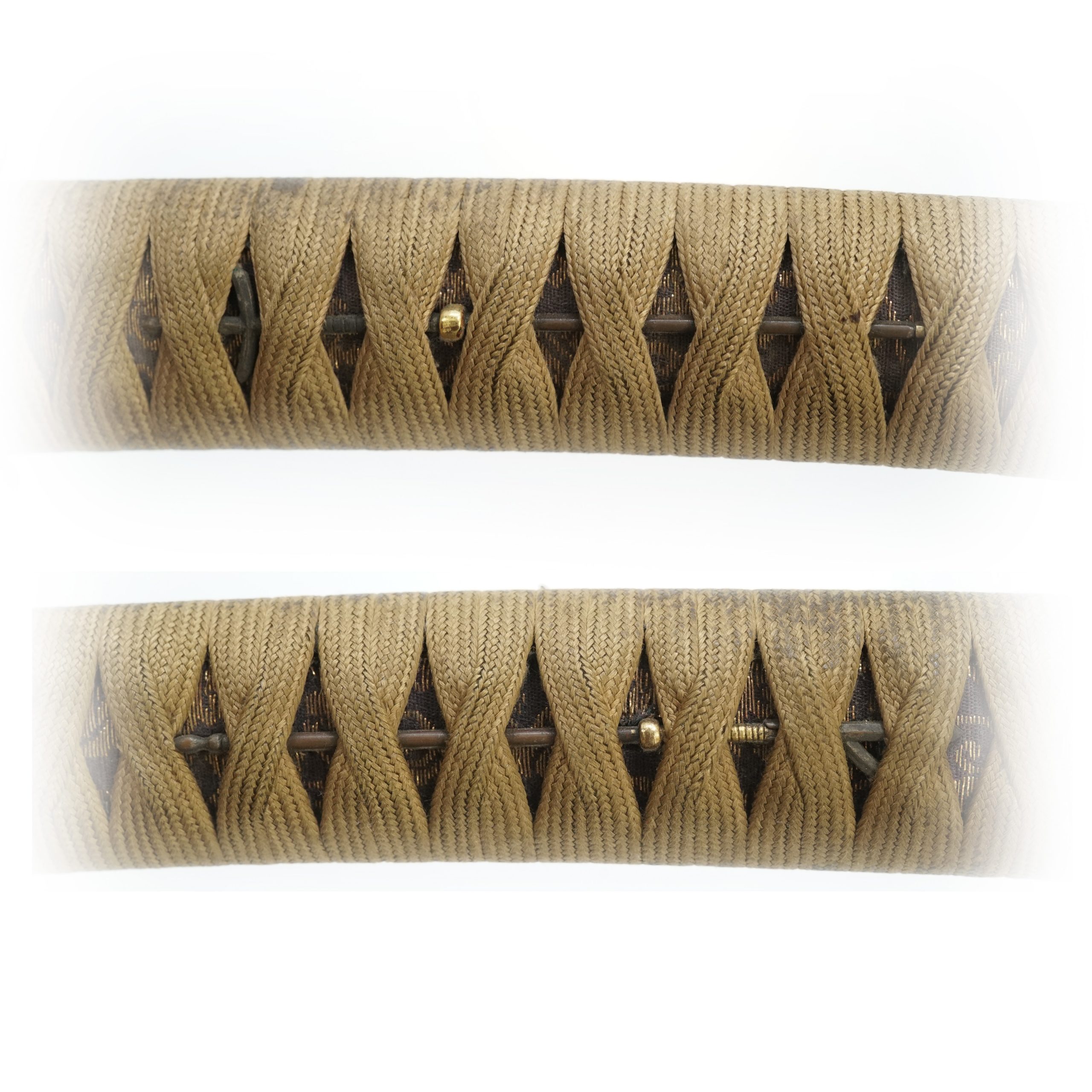 Tsuba and Habaki：Tsuba is the handguard for the Japanese Sword and Habaki is the equipment to make the blade not touch its scabbard inside.It prevents the blade from getting rusty and chipped.
This type of shape is called Aoi-Gata-Tsuba. It’s a combination of four leaves of Aoi. Aoi means hollyhock in Japanese. It’s often found for Tachi Tsuba. Each edge makes Inome pattern, which looks like a heart mark. Inome pattern has been used since ancient times in Japan especially as a part of decoration for shrine or temple. As its name implies, eyes of boar are the origin of this pattern. It’s believed that Inome pattern works as an amulet so that it protects us from evil spirits or fire. Also, it’s said that it brings good-luck. Karakusa-Monyou(design of ivy) is engraved on the whole surface. Ivy has vitality and it thrives strongly. So, arabesque design represents prosperity and longevity. 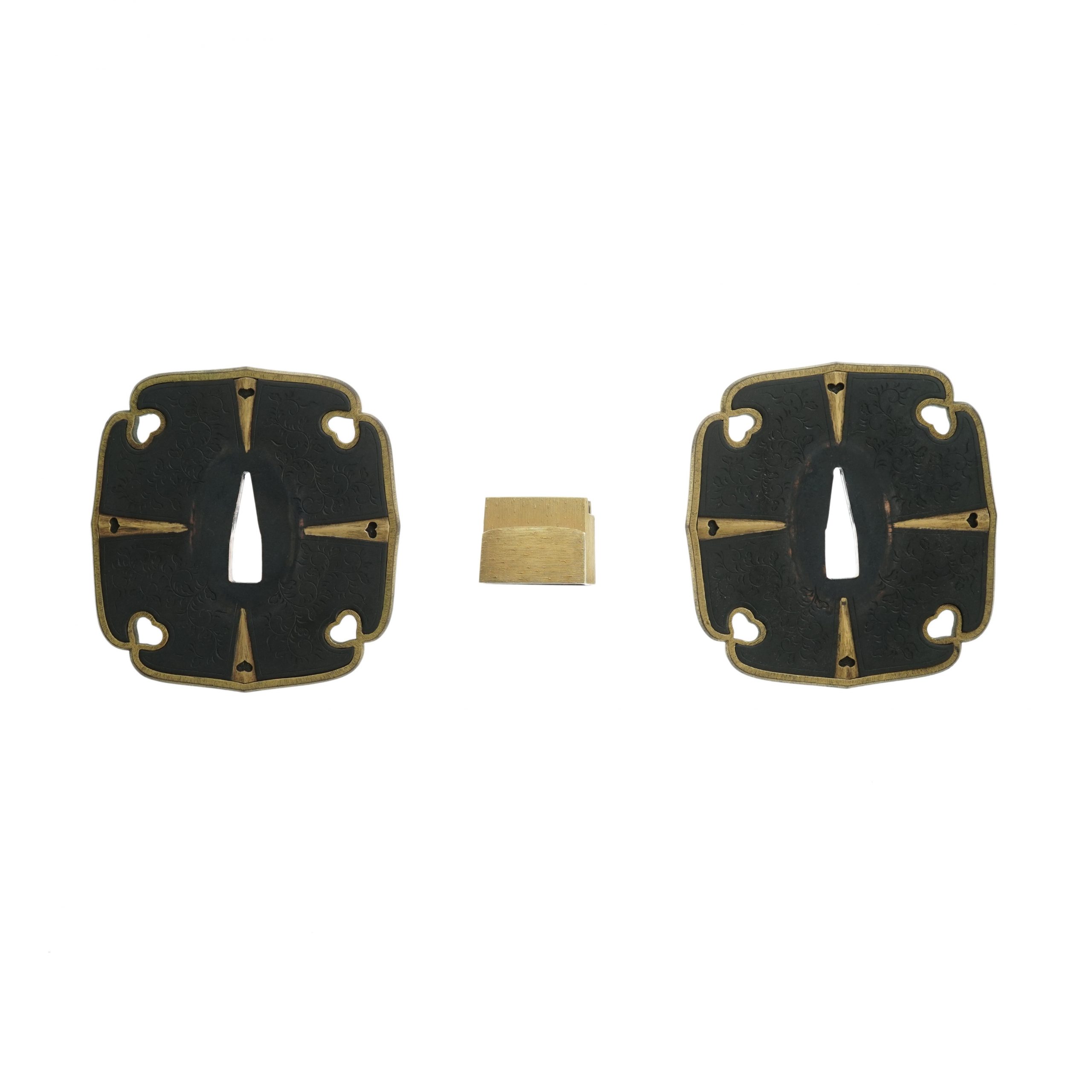 Saya：Saya is the scabbard for the Japanese sword.
This Saya is decorated with Nashiji-Nuri technique. It’s a kind of lacquer artwork for craft-work products, and it uses gold powder or silver powder. As the aggregate of these powders seems to be a cross section of pear’s pulp, this technique was named  like this. Same as Fuchi-Kashira, plants are inlaid with gold. It might be the family crest of this Samurai. Sageo(cord which is coild around Saya) has Kikkou-Gumi pattern. Kikkou means a turtle’s shell. It’s said that turtles live long so that this design represents longevity. 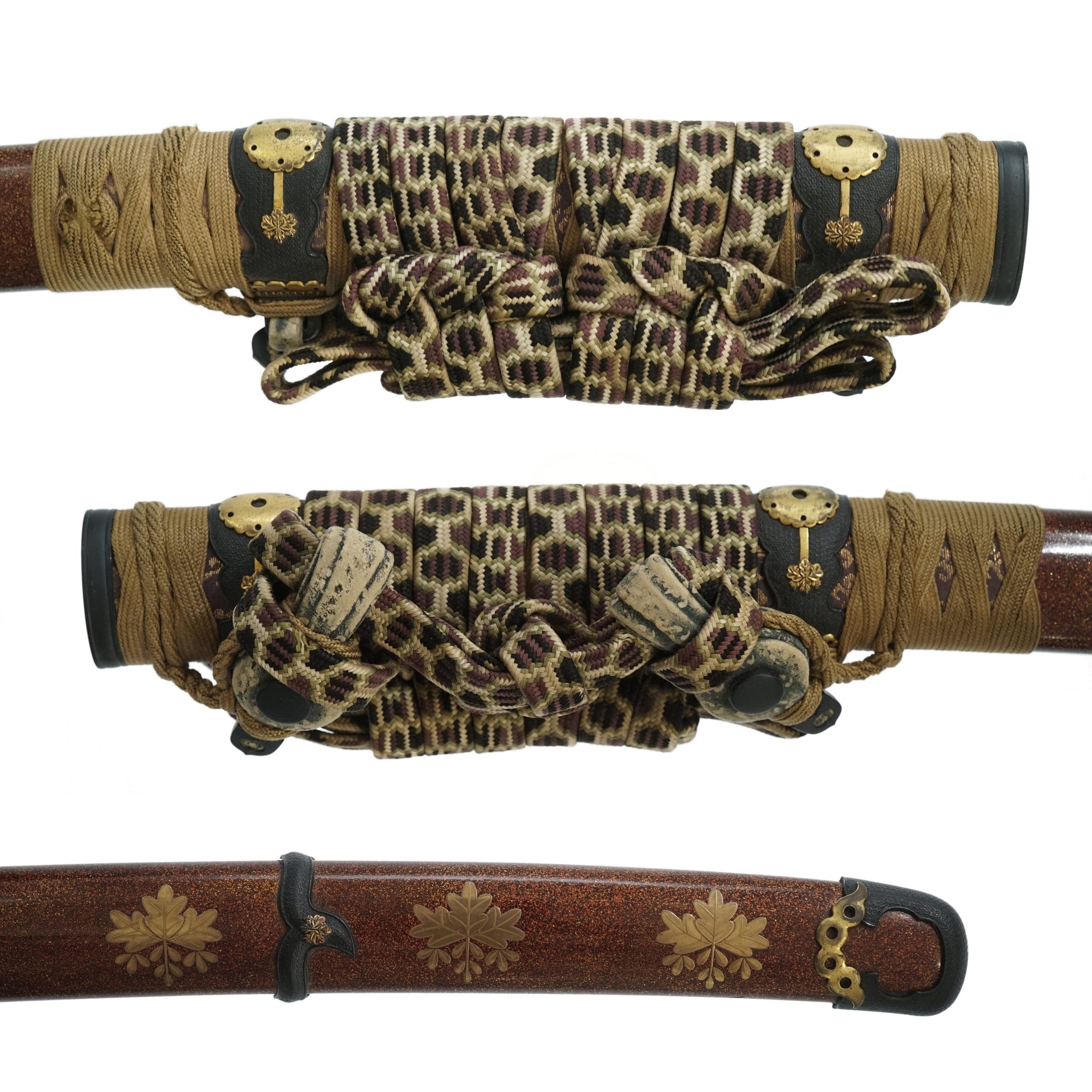 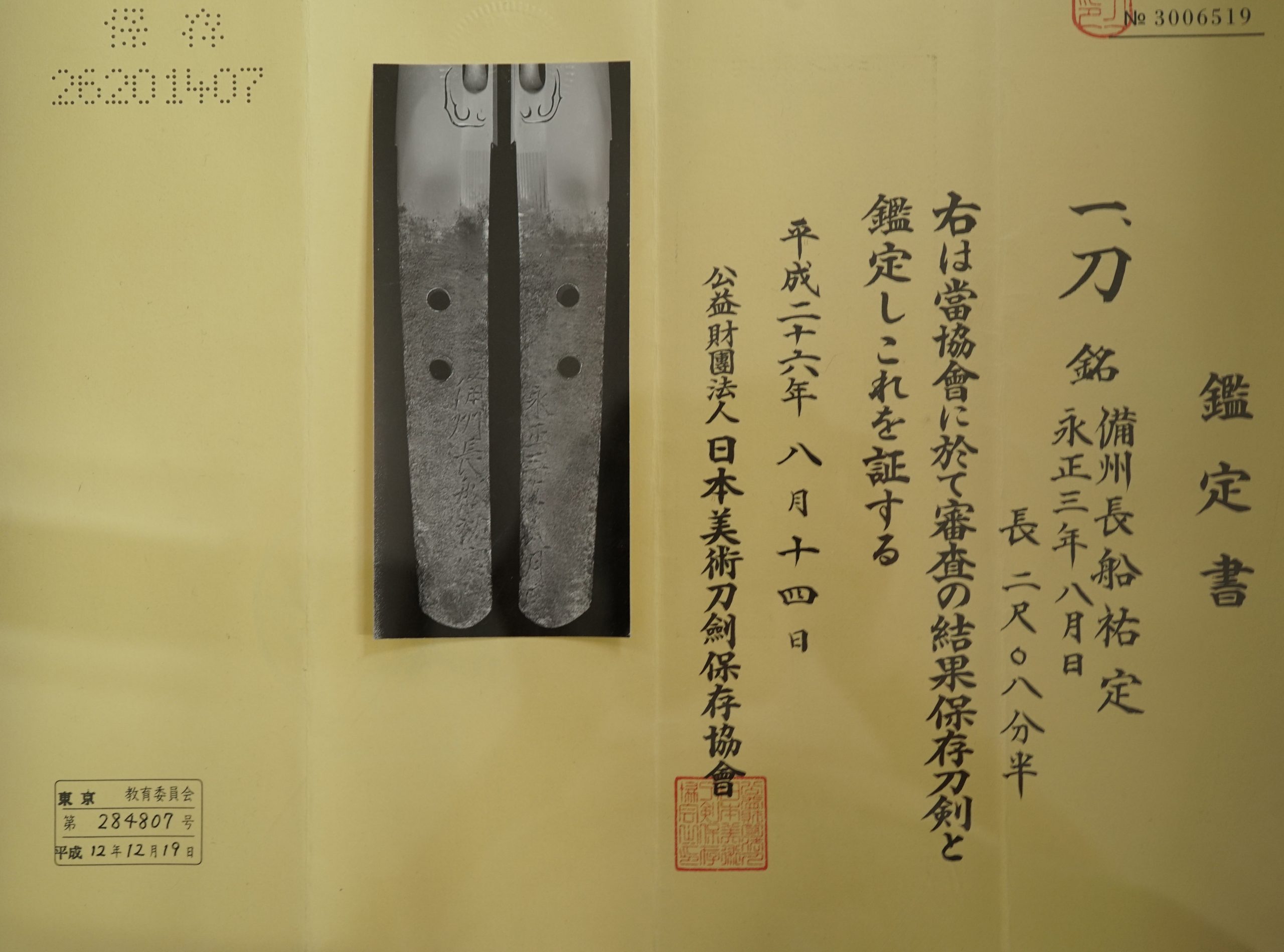 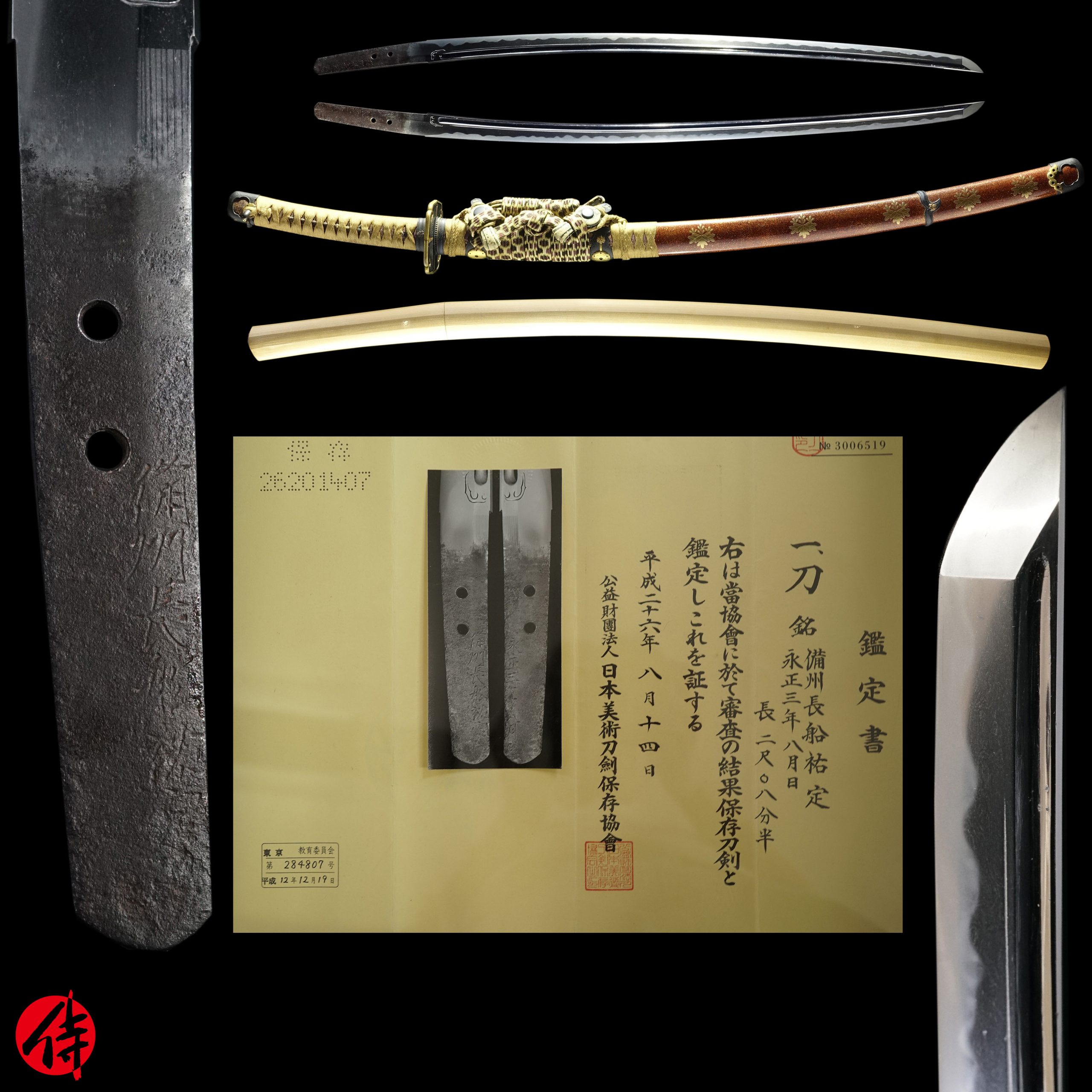 All the antique Japanese swords we sell are hand-forged edged swords, which are at least 150 years old or older. Also, the blades were made of Japanese special carbon steel called TAMAHAGANE.

The Japanese sword is considered a cultural article for the Japanese Cultural Agency(Bunka-Cho). Therefore, we will need to obtain its export permit from the agency before we ship any Japanese swords overseas. It might take a long time to receive this permit so, we would like you to expect at least 2-3 months for us to ship the sword you ordered. We have shipped antique Japanese swords to USA, UK, France, Australia, Canada(BC, AB province), Mexico before. Once we receive the permit, we will ship your sword with a PVC pipe, which is one of the most secure packages because of its durability.

We ship by EMS(Japan Post Office), an international shipping carrier based in Japan, and inform you of a tracking number for your sword. We will put 100 % insurance for your sword without any extra charge.

How to buy an antique Japanese Sword

【Payment Method】
We accept payment through Stripe(Credit card) or Paypal. If you prefer other payment method, please contact us. After confirming the payment from you, we will apply for an export permit.

【A Guide to Japanese Sword Maintenance】
If you like to know how to take care of the Japanese sword, here is the video for you. Mr. Paul Martin, Japanese sword expert, shows you how to give proper maintenance to your sword. When you purchase a Japanese sword from us, you can get a Free sword maintenance kit, which appears in this video.