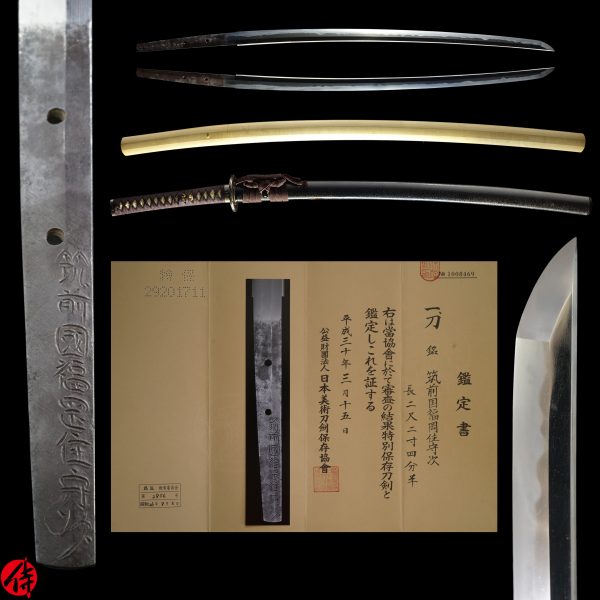 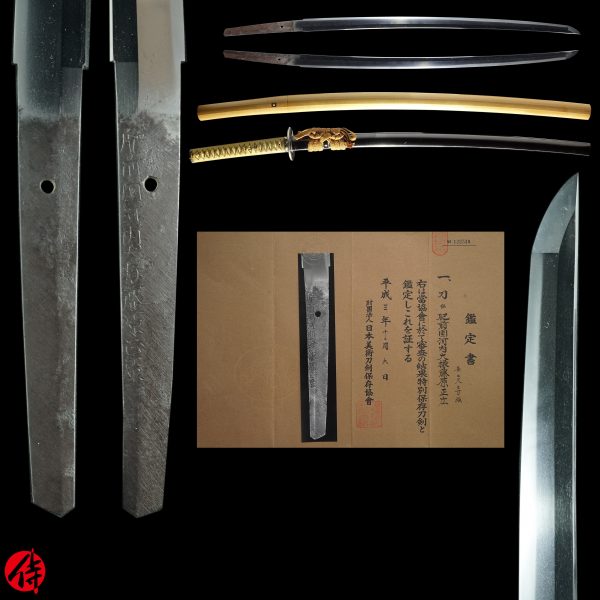 We use high resolution images. You can enlarge all the photos to see the detail of the blade and sword mountings.

The swords forged by Nobukuni school weren’t probably as famous as Chikuzen Sekido school because they were only allowed to sell within the Kuroda clan, not to other clans.
YOSHIKANE was the father of SHIGEKANE, who served 8th generation Shogun Tokugawa Yoshimune. His son, Shigemune, was selected as one of four swordsmiths who were allowed to inscribe hollyhock emblem, representing Tokugawa shogunate family crest.

This sword has a Tokubetsu Hozon certificate issued by NBTHK. This authentication paper was only given to Japanese swords, especially worth preserving by Nihon Bijutsu Touken Hozon Kyokai(the Society for the Preservation of the Japan Art Sword). This blade is in excellent condition, and comes with beautiful set of sword mountings. 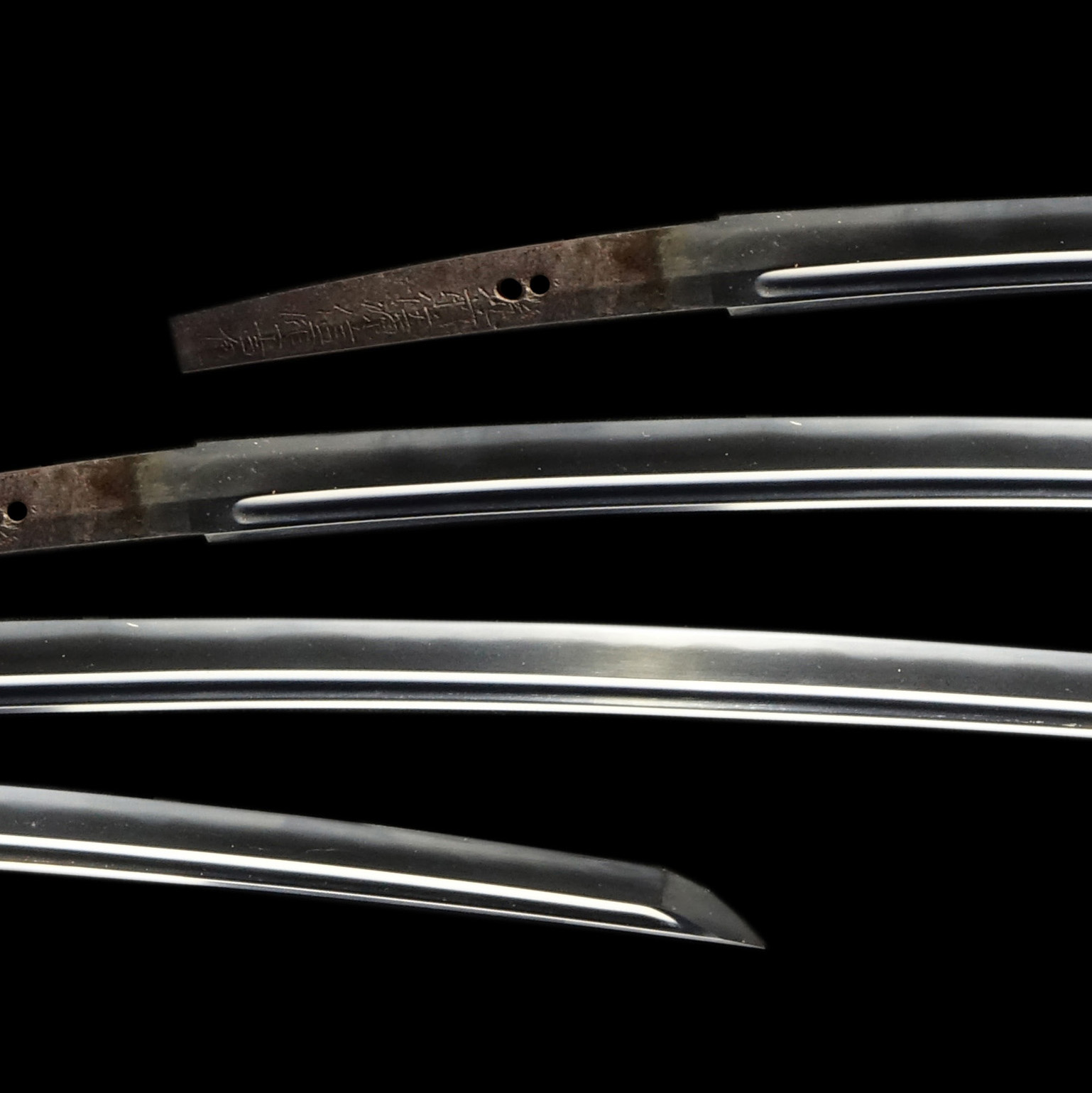 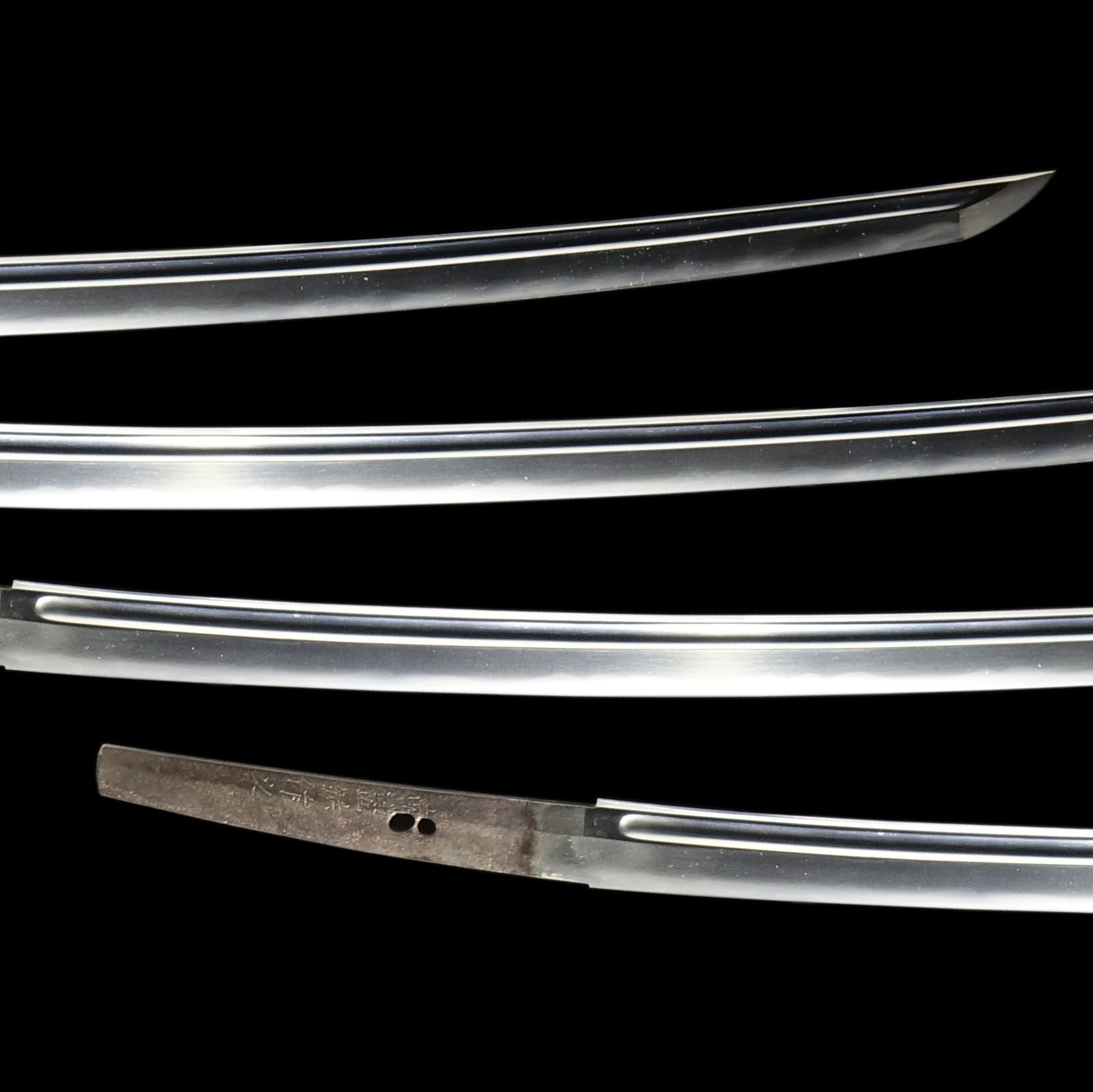 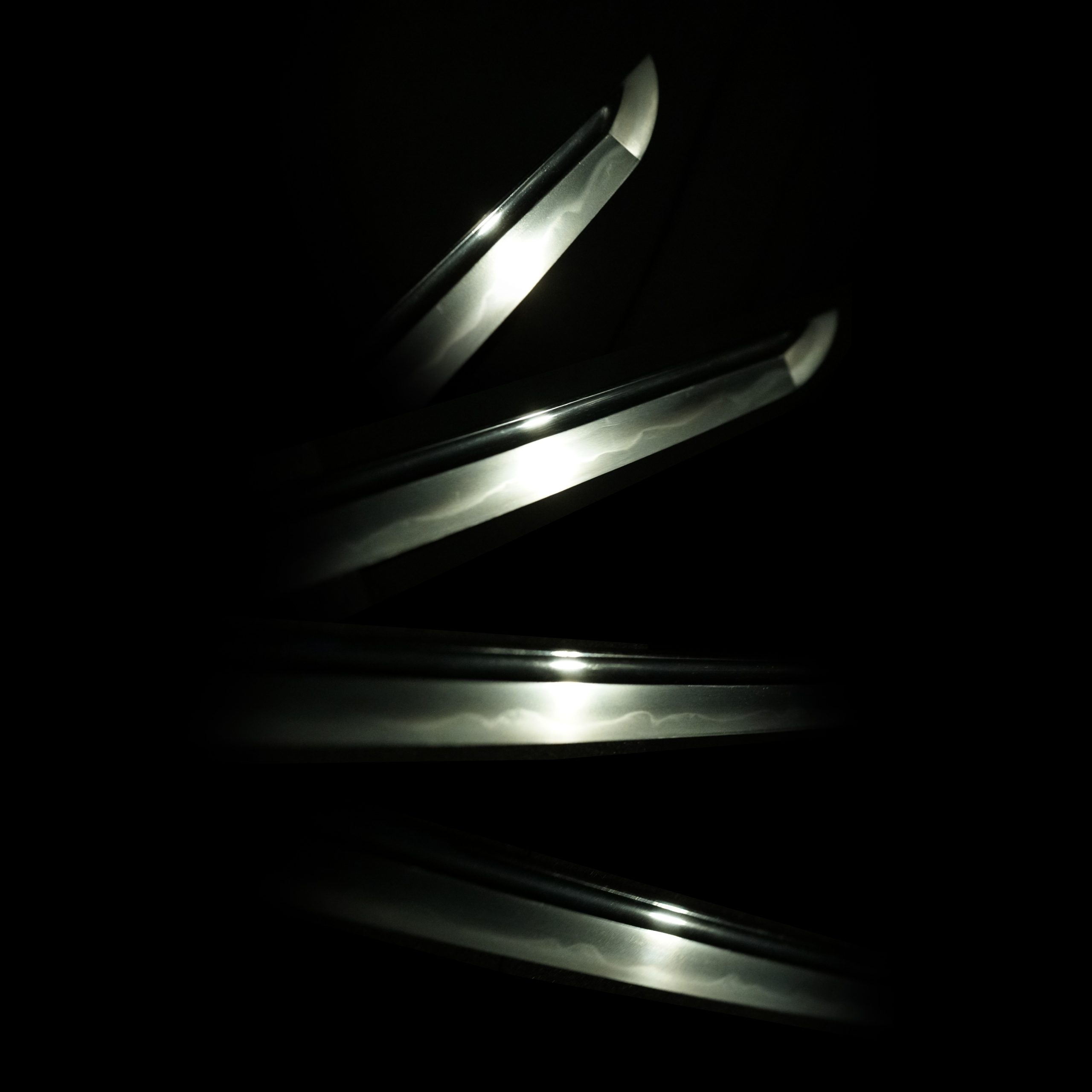 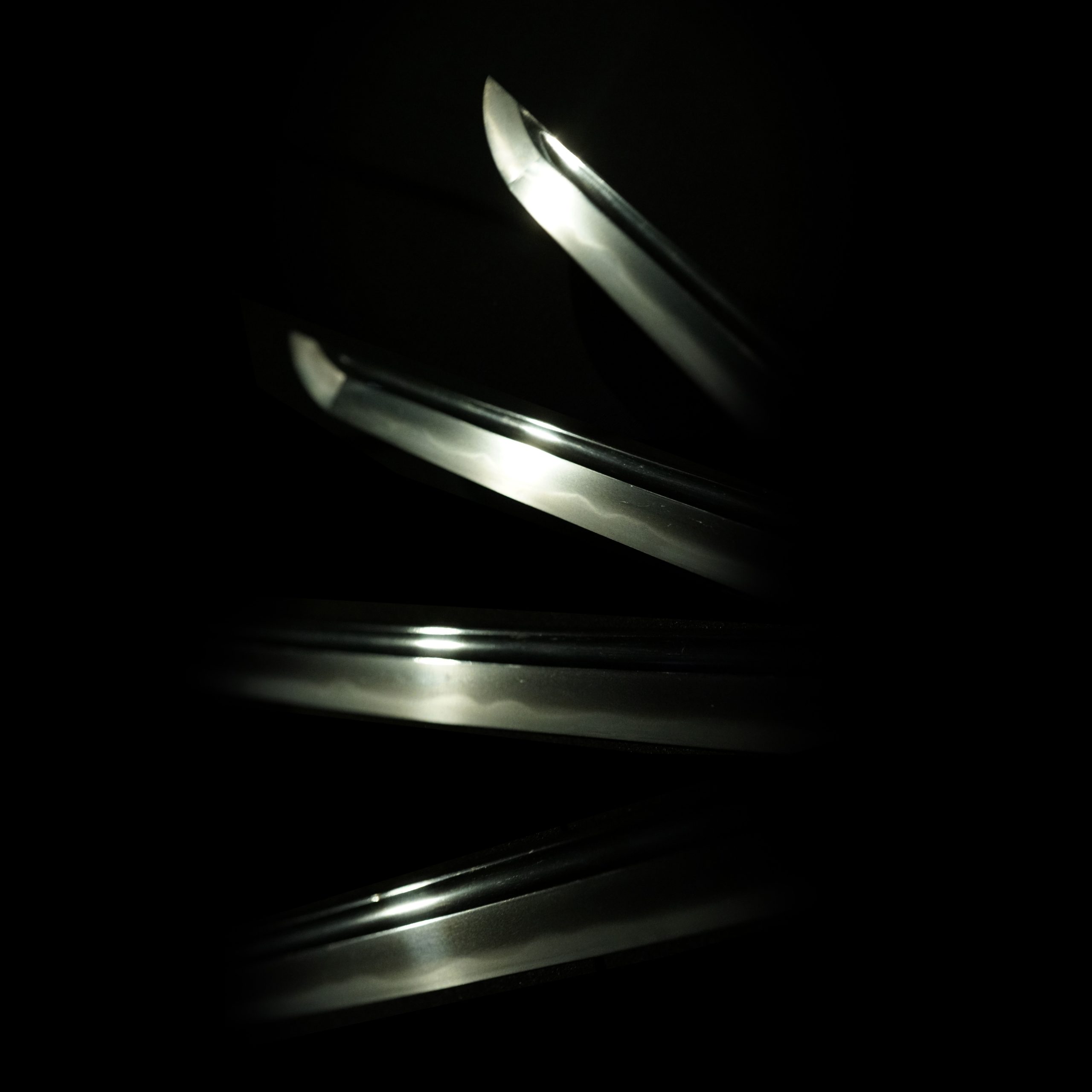 Nakago：Nakago is the tang of the Japanese sword. The signature(Chikuzen Jyu Minamoto Nobukuni Yoshikane) is inscribed on the front and the other side says the blade was made of western carbon steel(Nanban-Tetsu.) 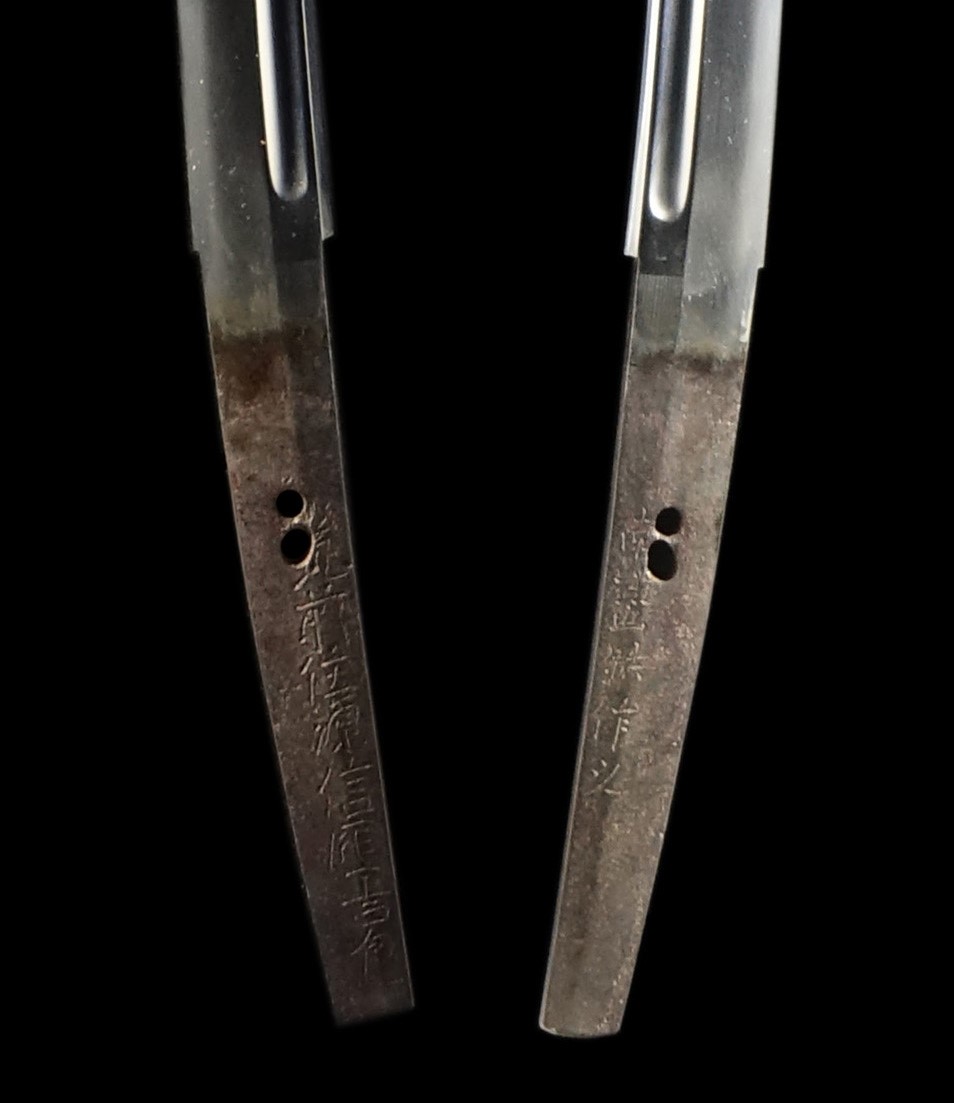 Fuchi-Kashira：A pair of matching sword fittings that cover the upper and bottom parts of its sword hilt. Gold inlay was applied on them.

Samurai, who wears gold armor, is designed on the Kashira. Waves and pine trees are engraved on the Fuchi. Also, a horse is seen on the opposite side (Please check the picture of Tsuka). This Fuchi Kashira might describe a scene of a battle at the water’s edge.

Tsuka is coiled with the Hishi-Maki technique, which is a general way to cover the Tsuka.

Tsuba and Habaki：Tsuba is the handguard for the Japanese Sword and Habaki is the equipment to make the blade not touch its scabbard inside.It prevents the blade from getting rusty and chipped.

Lions are engraved and inlaid with gold on both sides of Tsuba. Their bodies are covered with curly hair. Initially, Makige-Mon (巻き毛文, curly hair pattern) symbolized the sun by its shape. As people regarded lions have the power of the sun, Makige-Mon was started to use for lion’s fur pattern. Furthermore, it is believed that lions will protect people from evil spirits. This Tsuba’s base is decorated with Nanako-Ji (魚子地) technique. The groundwork was hit by Nanakoji-Tagane (chisel for metalworking), so small dents cover the background. Each little dot looks like a fish egg; therefore, its name “Nanako” is written as children of fish in Kanji (a kind of Japanese character). 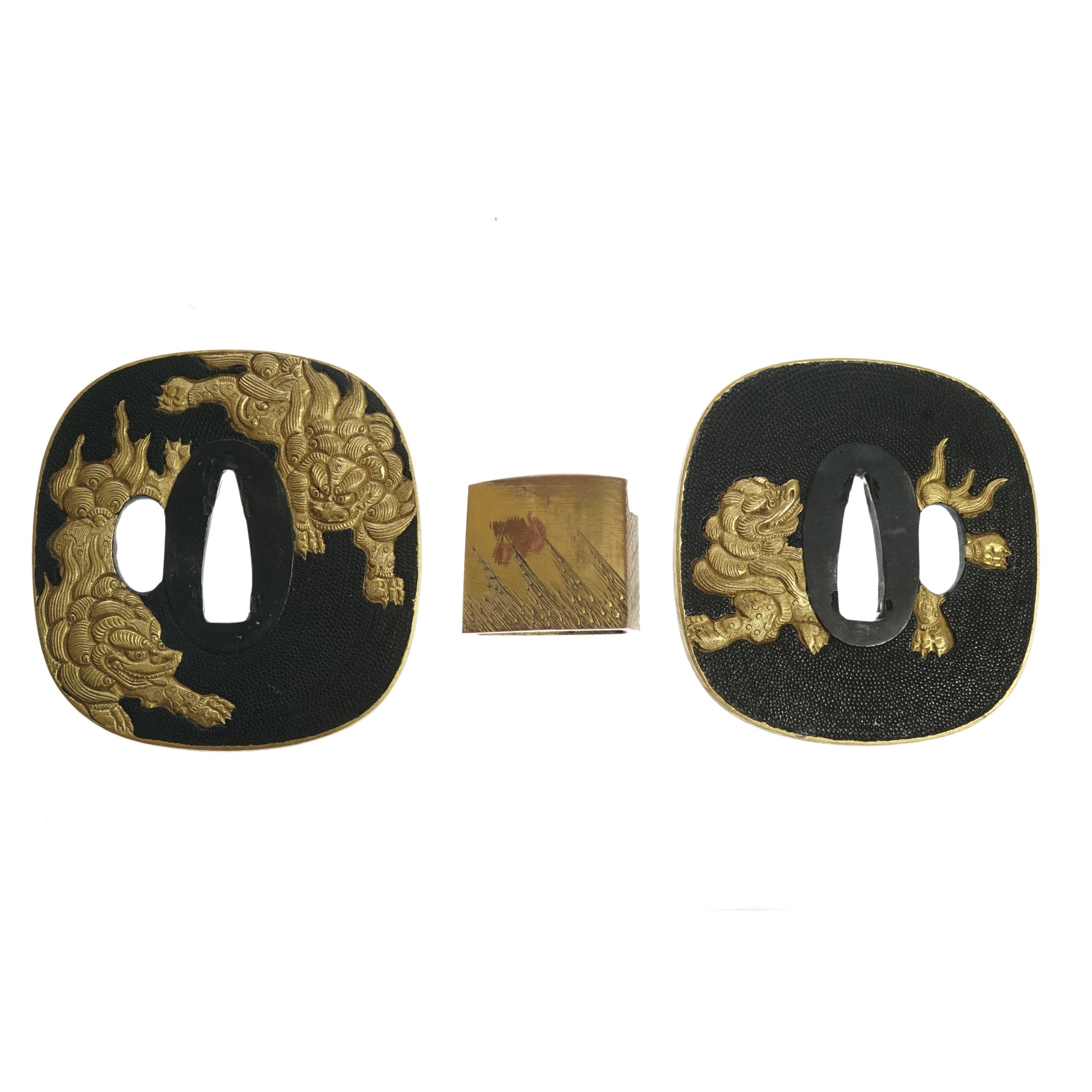 Saya： Saya is the scabbard for the Japanese sword.

The scabbard is painted with glossy black lacquer. During the refining stage of lacquer, it is mixed with iron. The luster of the black coat is made from the oxidation effect of iron. 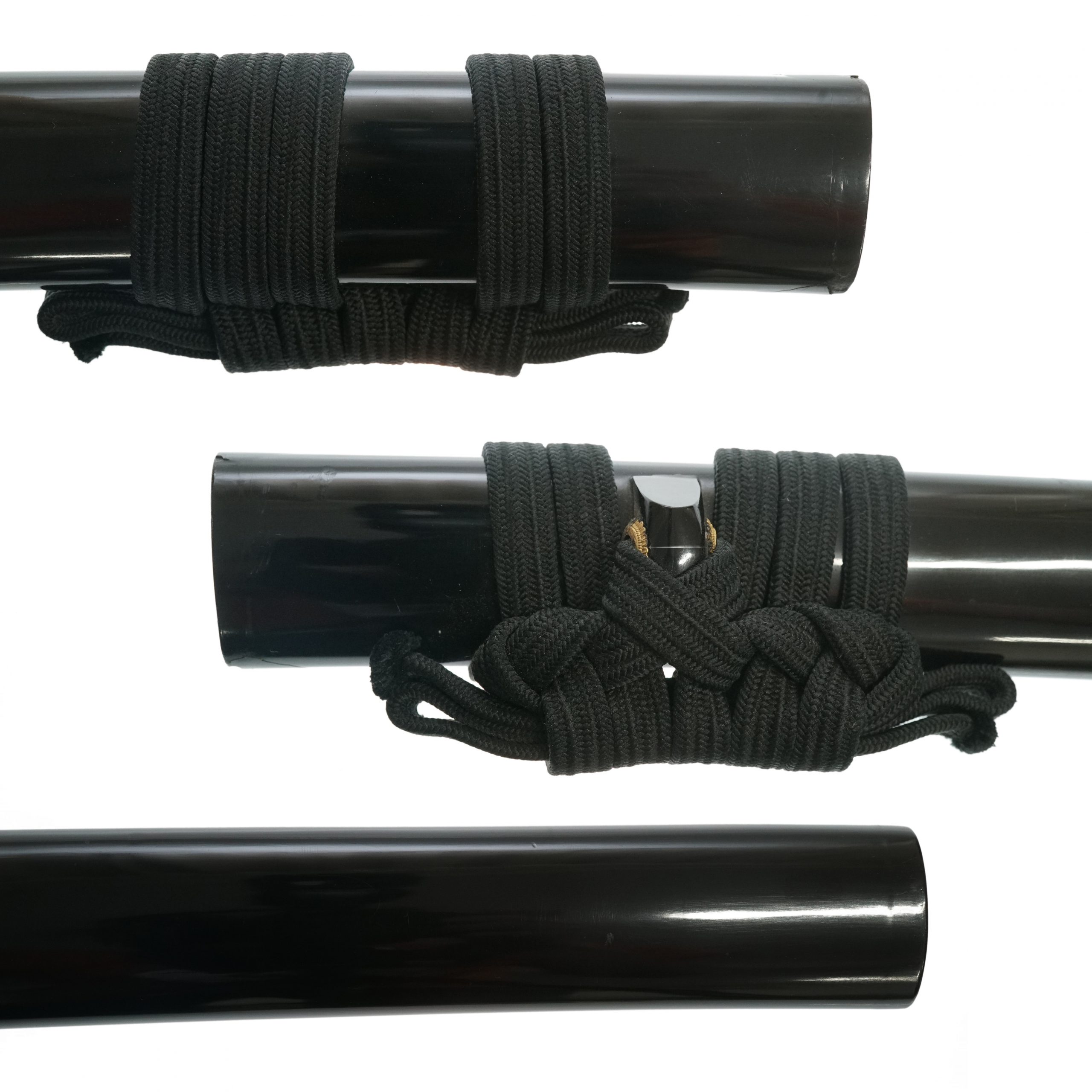 Authentication Paper：NBTHK TOKUBETSU Hozon Certificate for the blade
NBTHK, also known as Nihon Bijutsu Touken Hozon Kyokai (the Society for the Preservation of the Japan Art Sword), is one of the oldest Japanese sword appraising organizations in modern-day Japan. They authenticated the blade on May 23th in the first year of Reiwa(2019). They appraised it as Tokubetsu Hozon Touken, the blade especially worth preserving for Japanese society. The purchaser will receive this original certificate as well. 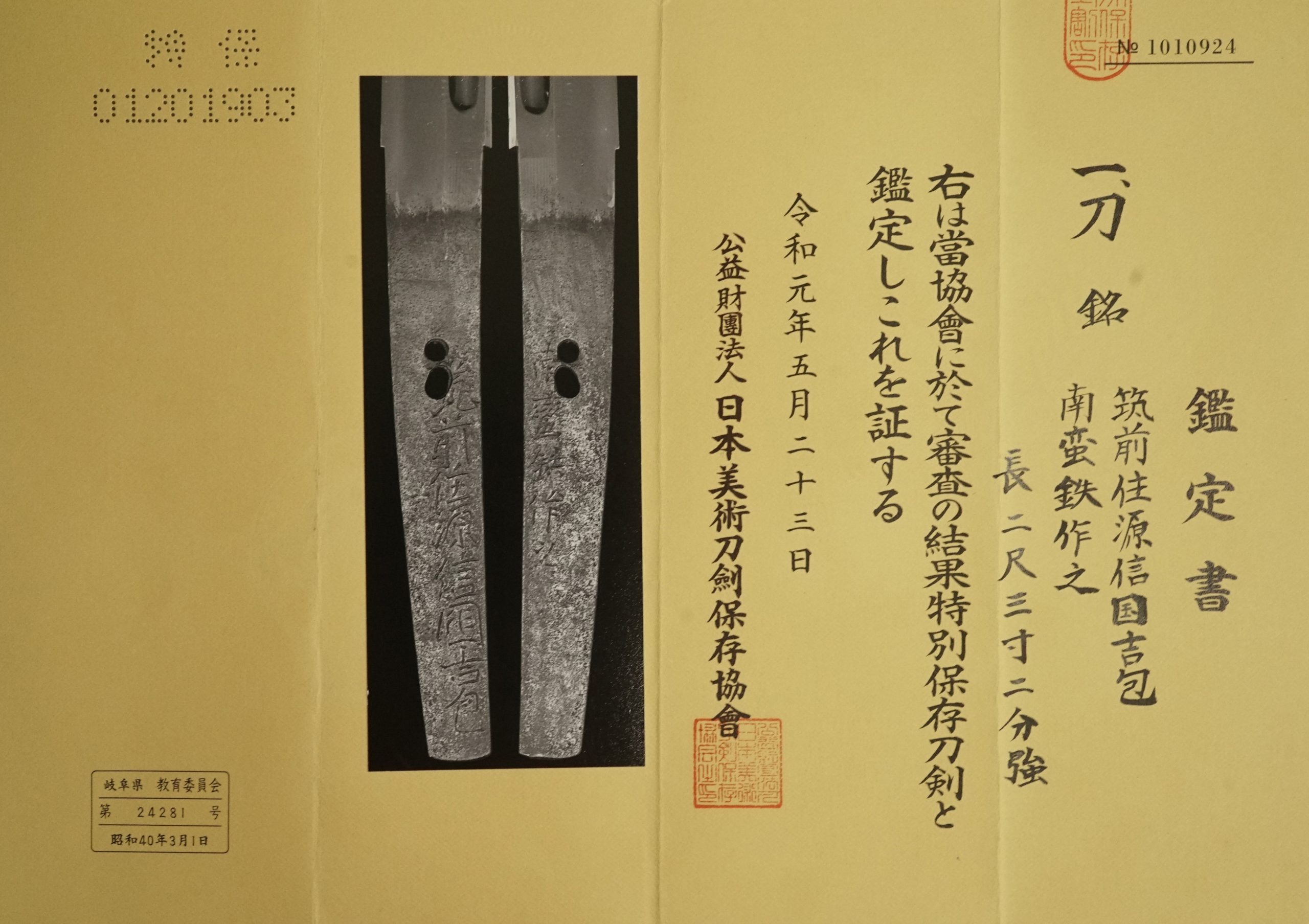 Registration Number : Gifu 24281
The Board of Education in Gifu prefecture issued a registration paper for this sword . In order to obtain this paper, the sword needs to be traditionally hand forged. With this paper, its owner can legally own an authentic Japanese sword in Japan. 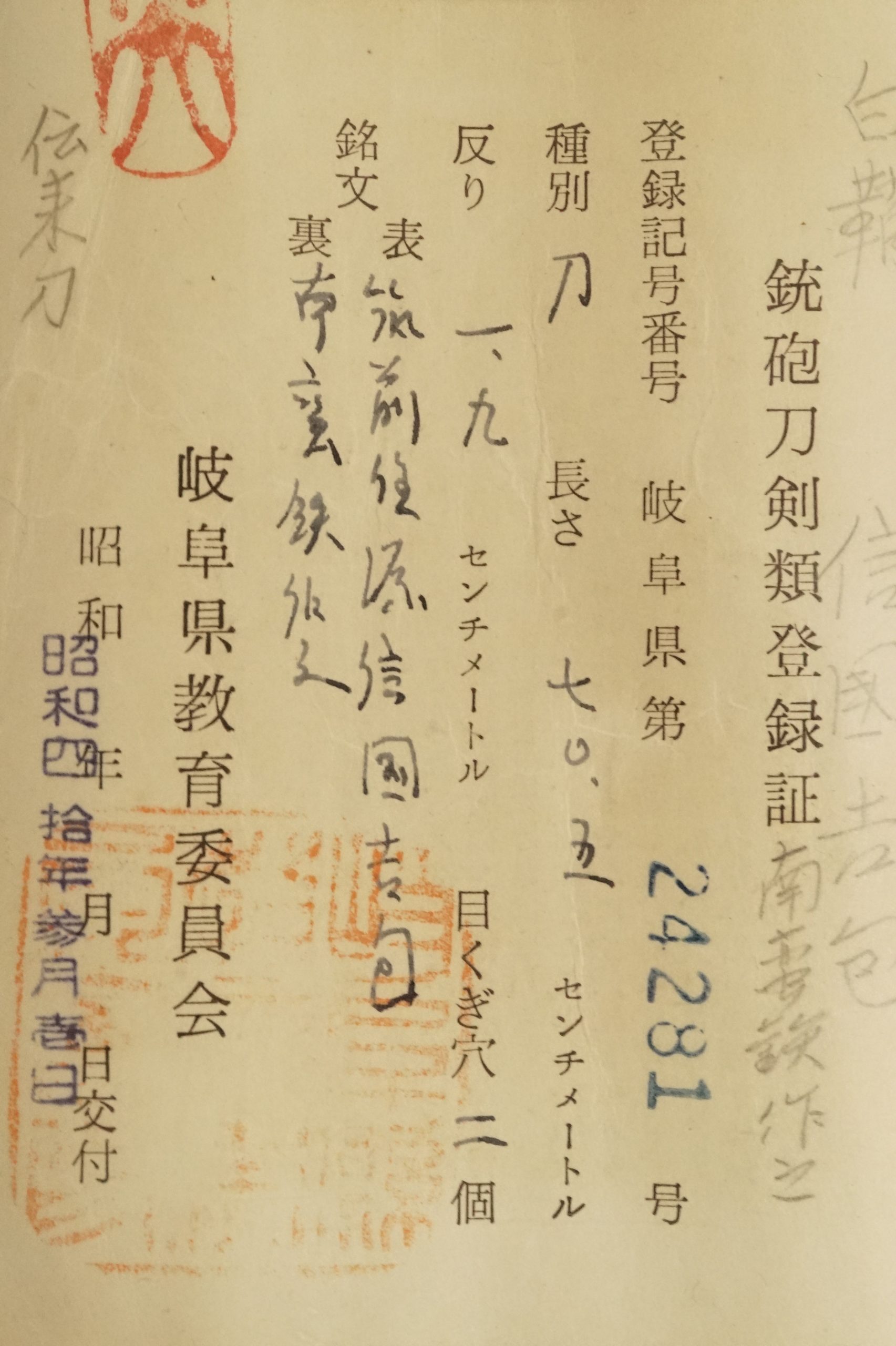 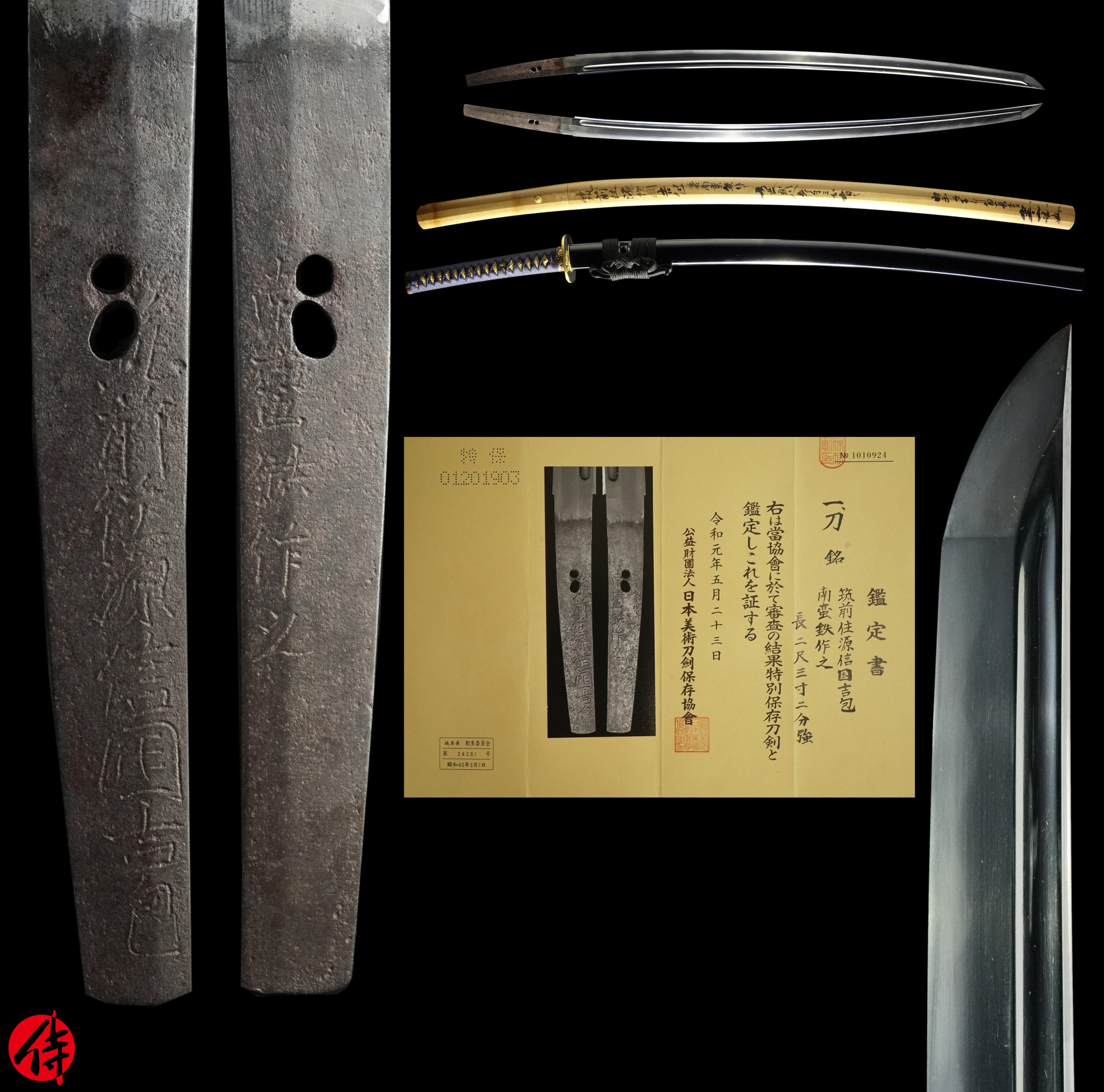 【Japanese Sword& Export Process】
The Japanese swords we deal with are hand-forged edged swords made in Japan. It was made from the traditional carbon steel called TAMAHAGANE(玉鋼).Samurai Museum is familiar with the proper legal procedure for an antique/ authentic Japanese sword to be exported from Japan. We have sent more than 300 Japanese swords to amazing owners who appreciate its historical value.

To legally export the sword from Japan to other countries, we will have to apply for its permit to the Agency for Cultural Affairs(Bunkacho) and return the original registration paper to the Board of Education. It normally takes around 1-1.5 months to receive this permit. And we would like you to expect at least 2-3 months for your order to arrive at your given address after you ordered. For more detailed info, please click here.

【Payment Method】
We accept payment through Stripe(Credit card) or Paypal. If you prefer other payment method, please contact us. After confirming the payment from you, we will apply for an export permit. You can either pay in Japanese Yen or US Dollars. The price is decided in Japanese Yen. The price in US dollar is calculated automatically based on an exchange rate.

【Shipping】
We have shipped Japanese swords to the USA, Canada(BC, AB,ON), Mexico, Australia, UK, Germany and France. If you don’t live in these countries and like to order, please contact us first before making a purchase.

Once we receive the export permit, we will inform you and ask if it is okay for us to ship. After confirming you are ready to receive the sword, we will proceed with its shipping. We use package cushioning to protect the item and put it in a PVC pipe, which is one of the most secure packages because of its durability.

We ship with EMS, an international expedited shipping service provided by Japan Post in Japan. We will send you a tracking number for your order as soon as we hand it to the post office. We will put 100 % insurance on the shipping document without any extra charge. Based on the total amount, there might be a duty tax to pay, depending on the countries.

【How to make sure the condition】
We uploaded high resolution photos for you to check its condition thoroughly. If you like to see more photos with different angles, please feel free to contact us. We will be happy to send them to you so that you can make informed decision. If you are currently living in Japan or visiting, you can visit our actual shop in Tokyo to inspect the sword with reservation.

It is essential for us to know that you are happy with your choice of a sword. and we are prepared to use the best of our ability to serve you.