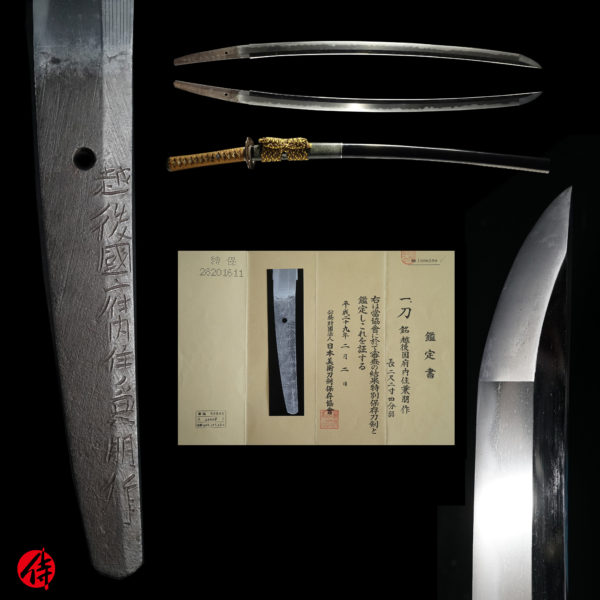 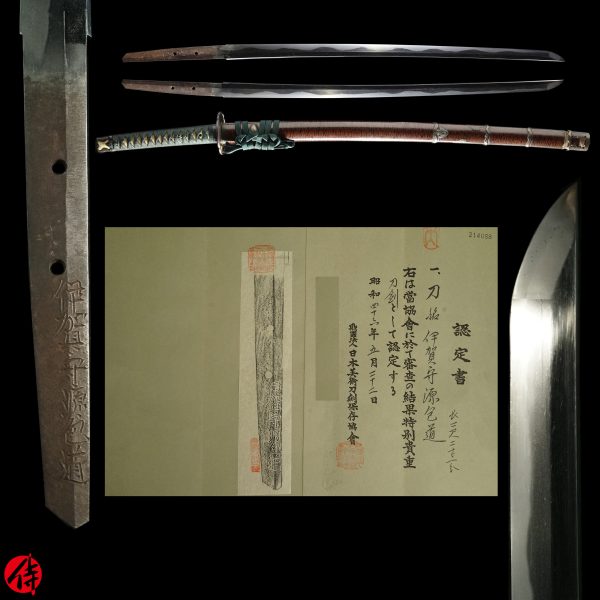 Delivery Date:
1.0-1.5 month after you place an order
*There might be delay in shipment depending on countries

This blade was forged by Tanba no Kami Fujiwara Terukado(丹波守藤原照門). He was a famous swordsmith in the early Edo period. (the 1650s)
He belonged to Yoshisada School, one of the seven prestigious schools in the Mino province. He first signed as Kanekado on his works. When the master of his school, Ujifusa, moved to Nagoya city, he took over the position, and he became the head of all the schools in the Seki city, located in Mino province. He received the title of Tanba no Kami in 1659 and changed his name from Kanekado to Terukado. His work was so popular among high-class Samurai that he sometimes forged swords in Edo city(today’ Tokyo) or Ise city (Mie prefecture). Isami Kondo, a famous Samurai, who played an important role in Shinsengumi at the end of the Edo period, also owned a Katana forged by Terukado.

The MINO swordsmiths style, also known as MINO-DEN, basically has the TOGARI(Pointed shapes protruding from the Hamon )in a classic straight line and random temper line with some white Utsuri. MINO-DEN had its origin from YAMATO-DEN in the late KAMAKURA period(1280-1330). It flourished in the MUROMACHI period(1333-1573) and continued until the EDO period(1603-1868).

MINO-DEN especially prospered during Sengoku Jidai(Warring State period) due to the high demand for weapons. And the location of Mino province beat others. Akechi Mitsuhide controlled Mino province, and Nobunaga Oda ruled Owari province. Tokugawa Ieyasu was the lord of Suruga (Neighboring areas). There was high demand from those powerful feudal lords and their retainers. Furthermore, so many wars occurred between the Kanto region and the Kyoto area.

Mino is located in the middle, making feudal lords feel convenient to order swords from MINO-DEN. The blades forged in MINO provinces also had the reputation of its practical design and sharpness. Many feudal lords demanded swords forged in the Mino province. The tradition of excellent sword forging skills had been passed to the Edo period, and Terukado is a good example.

This sword has a Hozon certificate issued by NBTHK. This authentication paper was only given to Japanese swords, worth preserving by Nihon Bijutsu Touken Hozon Kyokai(the Society for the Preservation of the Japan Art Sword). 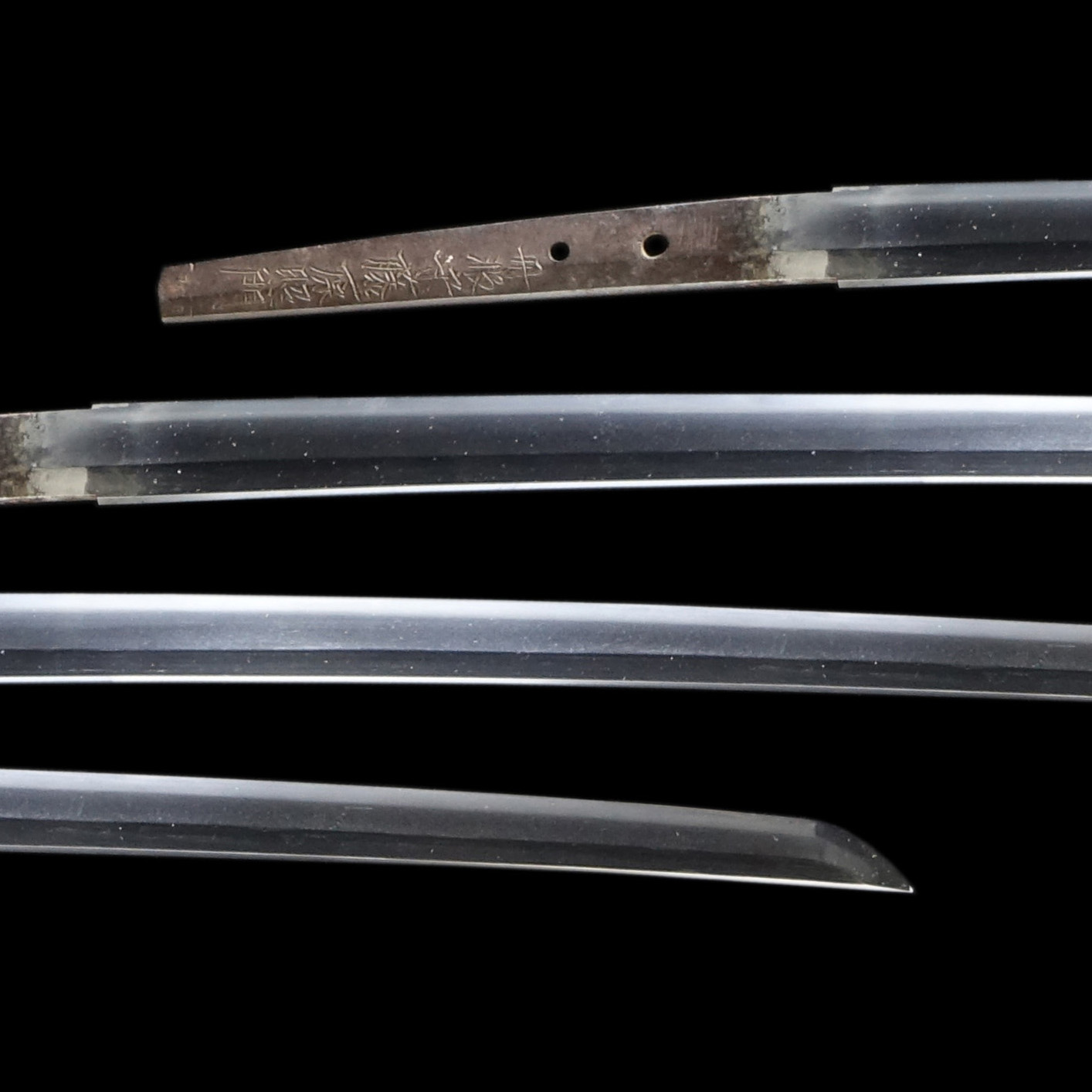 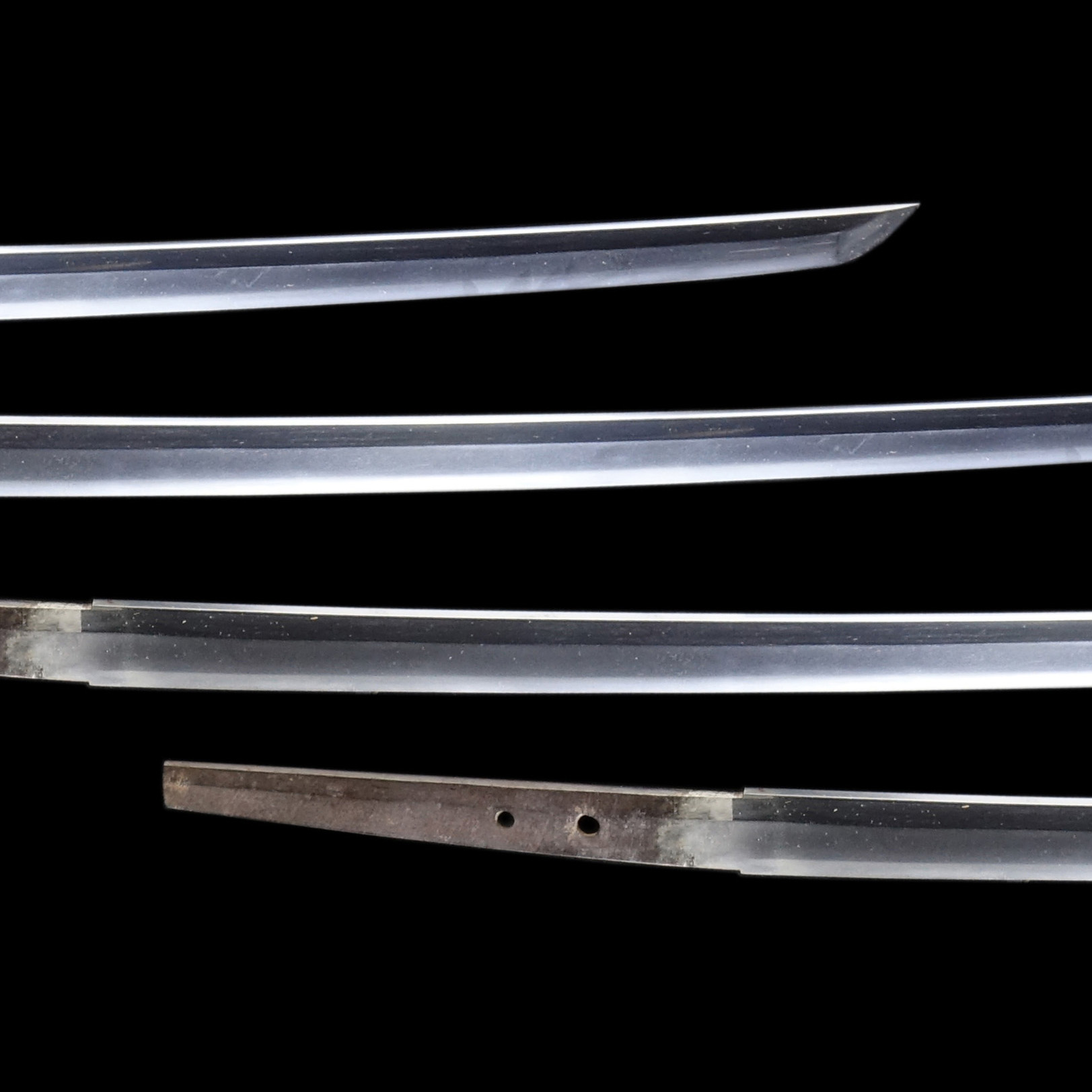 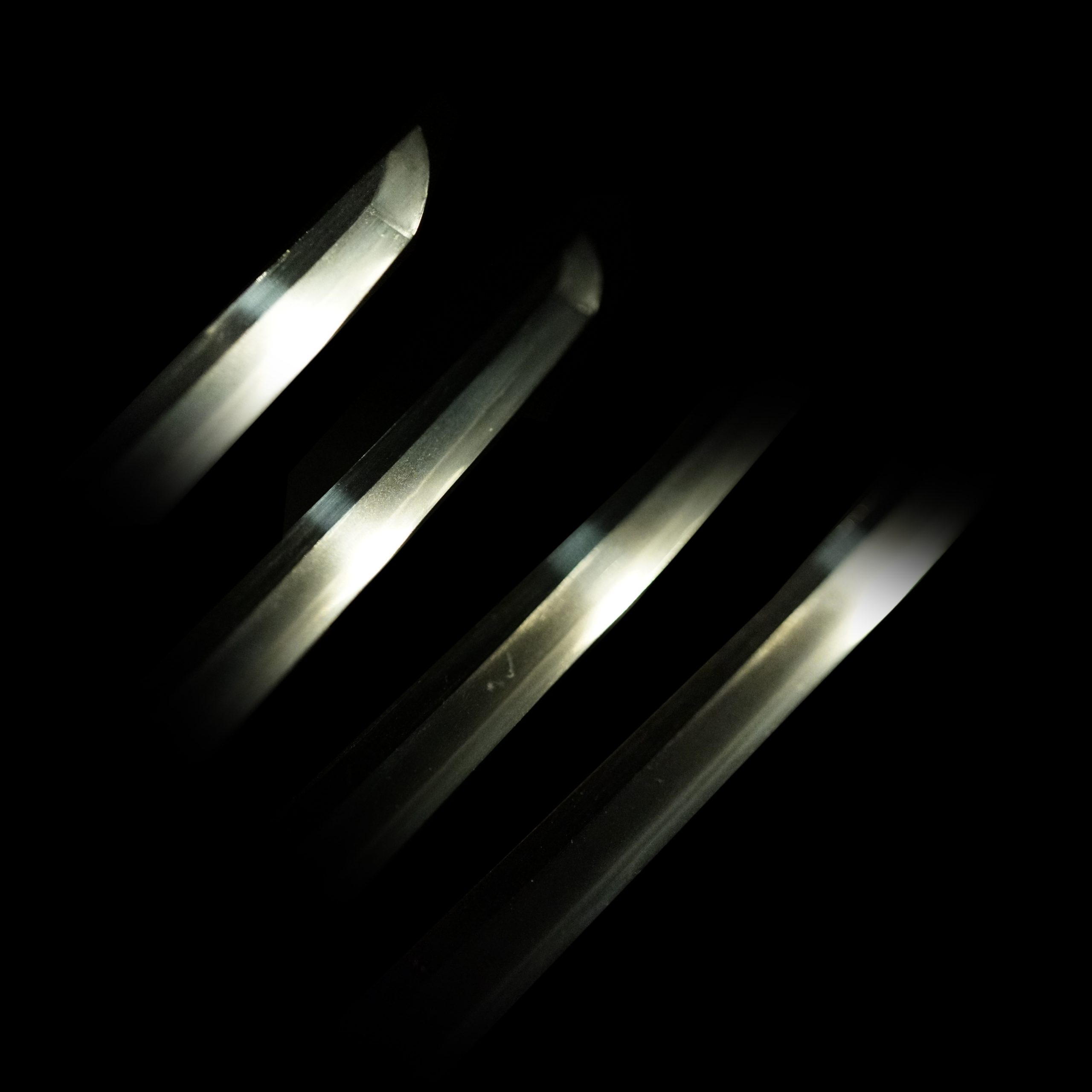 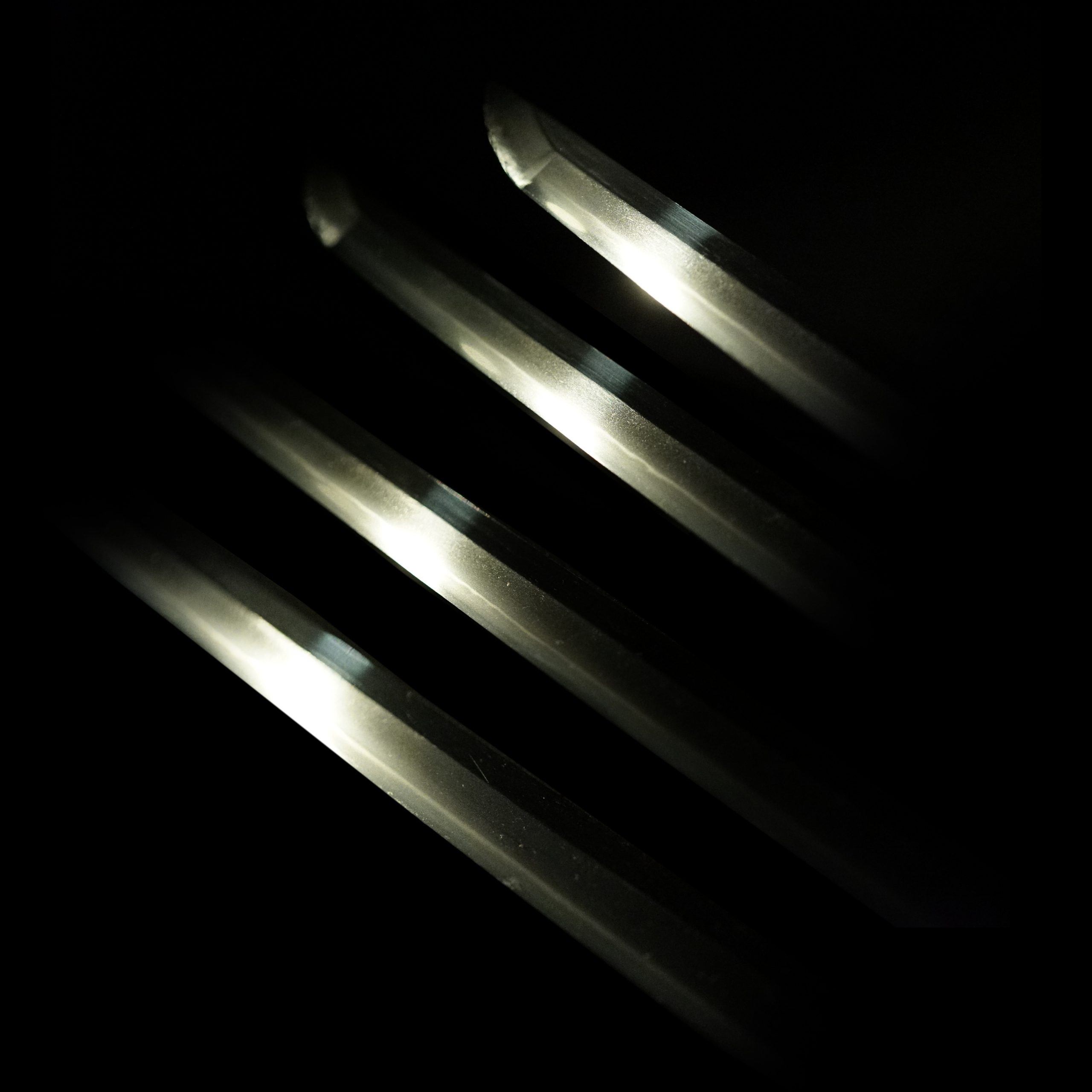 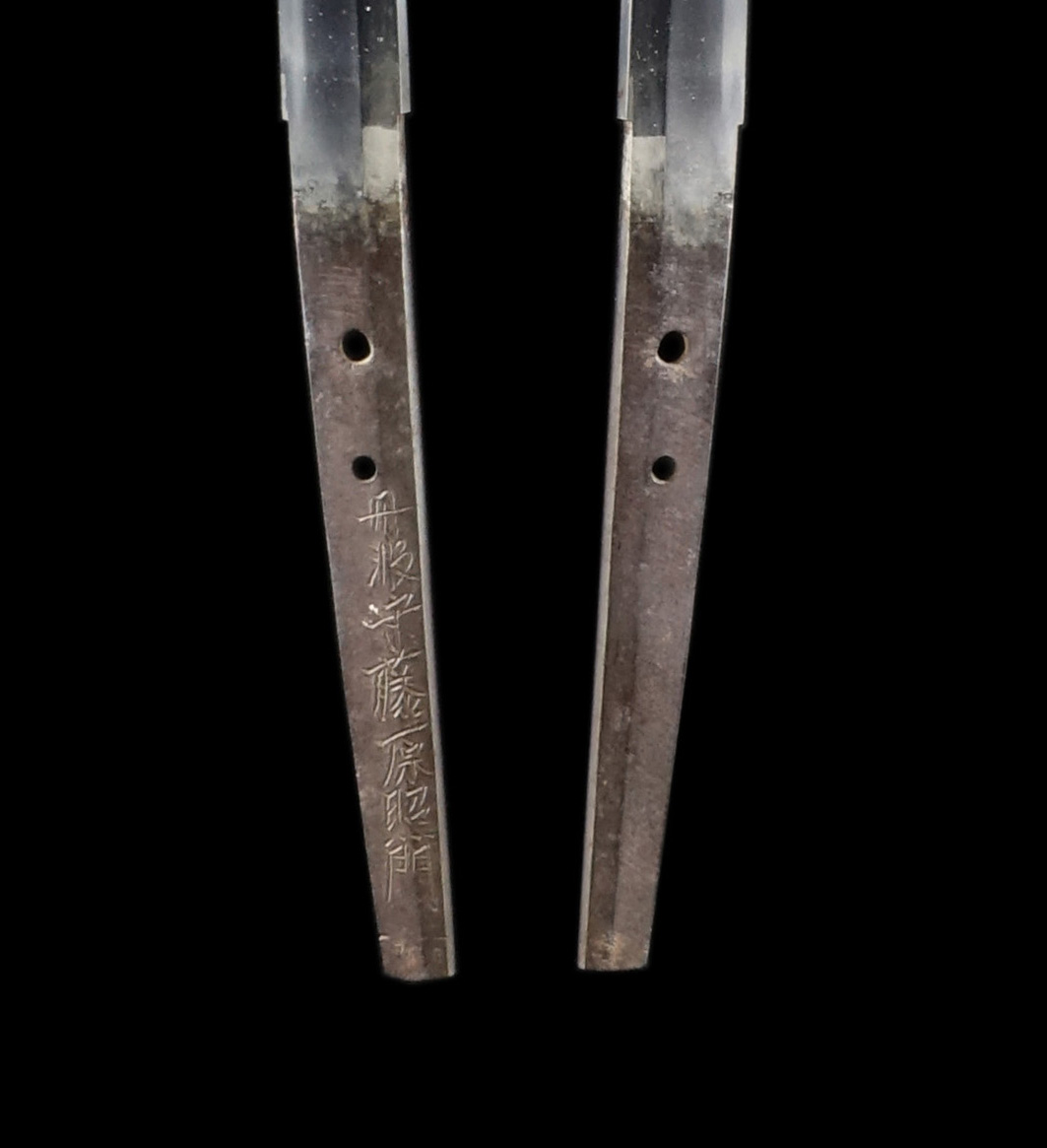 The battle scene is described. Samurai warriors are fighting on boards. You can find Samurai, who brings a spear, and another Samurai who holds a bow. They are glaring at their enemies; it tells us a tense atmosphere on the battlefield. The creator of this Fuchi Kashira might have wished that its owner would become a brave Samurai like warriors designed at this work. 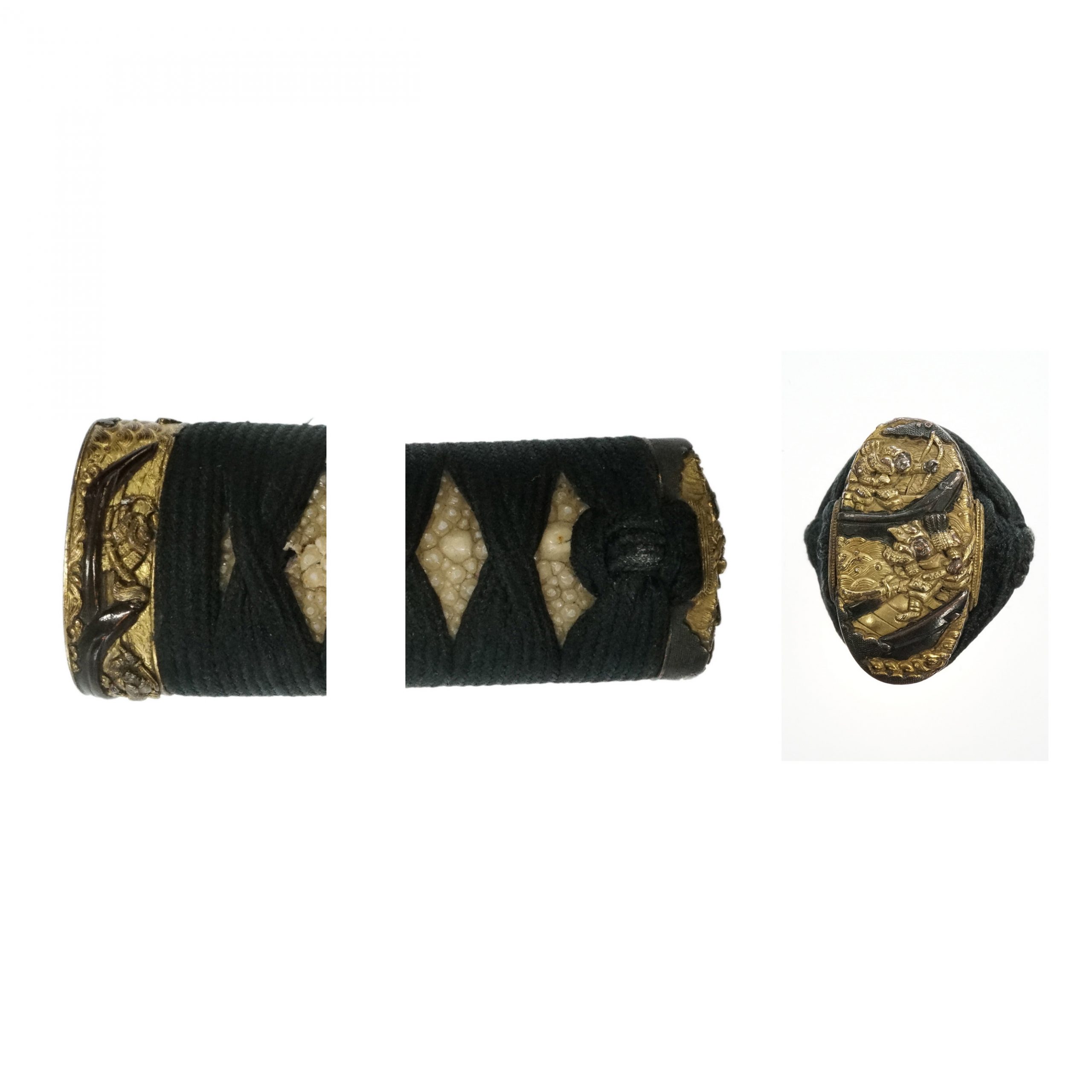 It is considered that kind of gears were designed for this Fuchi Kashira. It might be flags and fans which were used in battles. Flags were helpful to know whose army was on battlefields from a distance. Fans were used by commanders to take command of the troops. 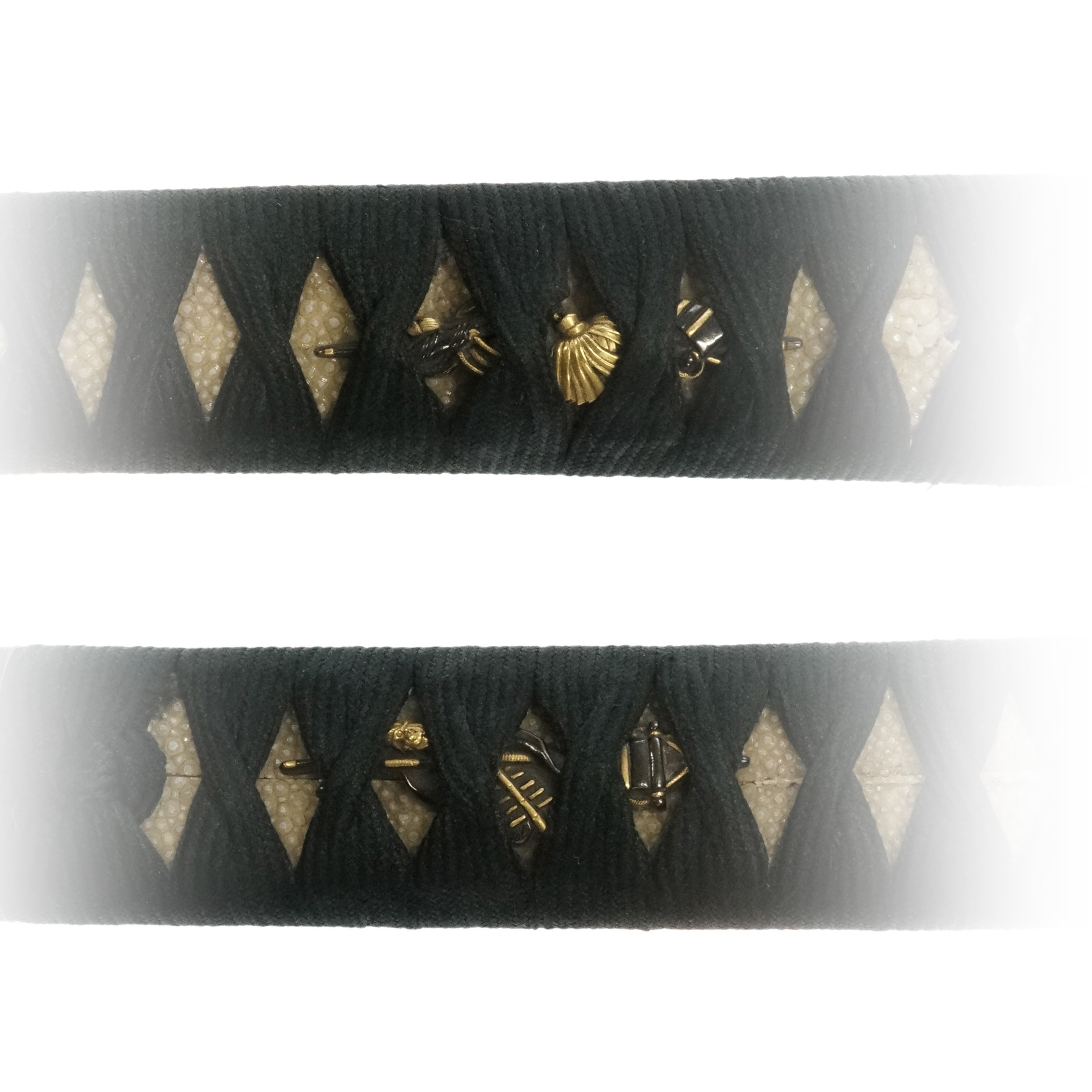 An iron Tsuba with Kozuka and Kougai holes. Two people who are engraved under the tree. Judging from their outfits, they might be hermits or mountain hermits. Some people admire them because of their magical powers or immortal bodies. This type of design is often found as Tsuba works. 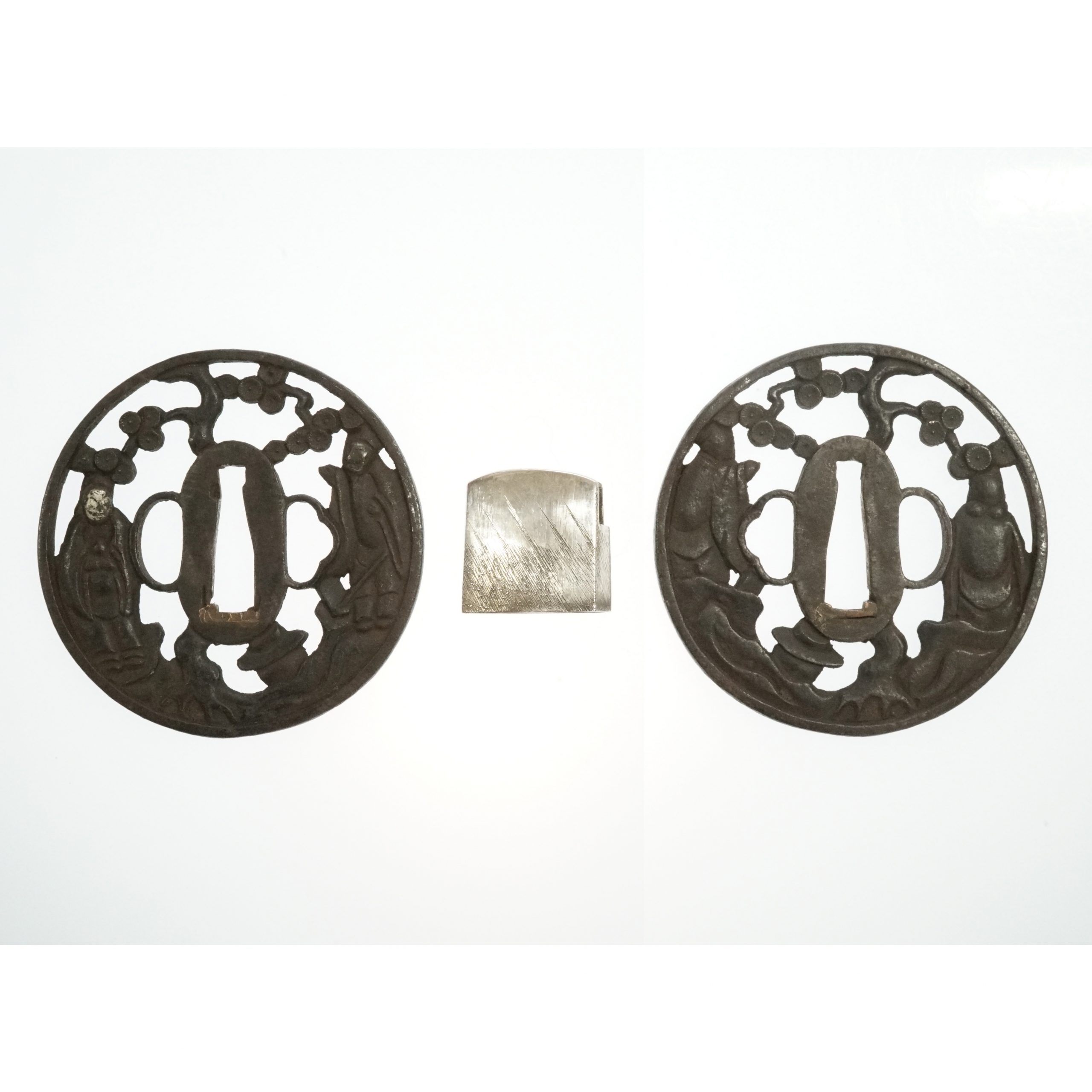 Saya：Saya is the scabbard for the Japanese sword. 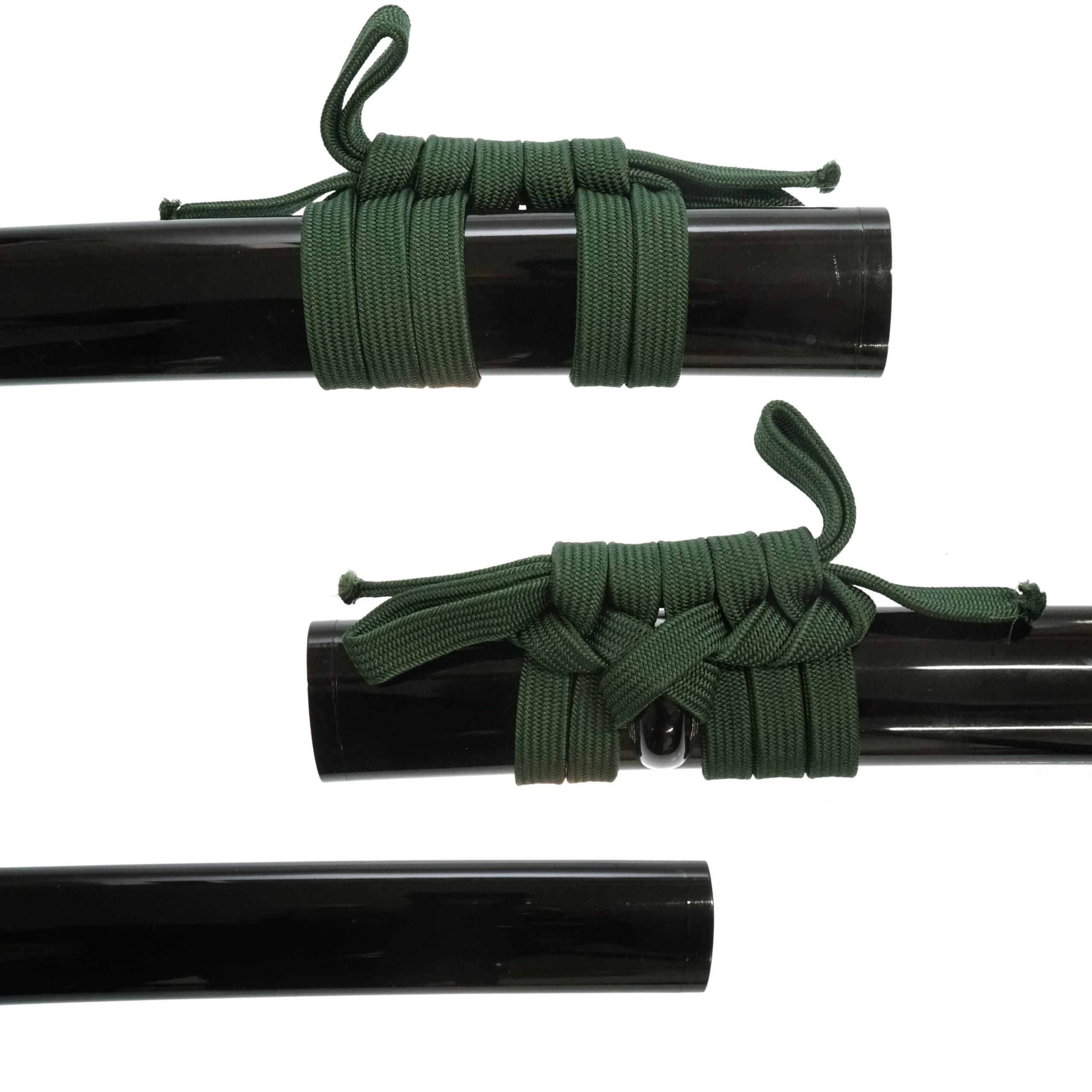 NBTHK, also known as Nihon Bijutsu Touken Hozon Kyokai (the Society for the Preservation of the Japan Art Sword), is one of the oldest Japanese sword appraising organizations in modern-day Japan. They authenticated the blade on Feb 19th in the second year of Reiwa(2020). They appraised it as Hozon Touken, the blade worth preserving for Japanese society. The purchaser will receive this original certificate as well. 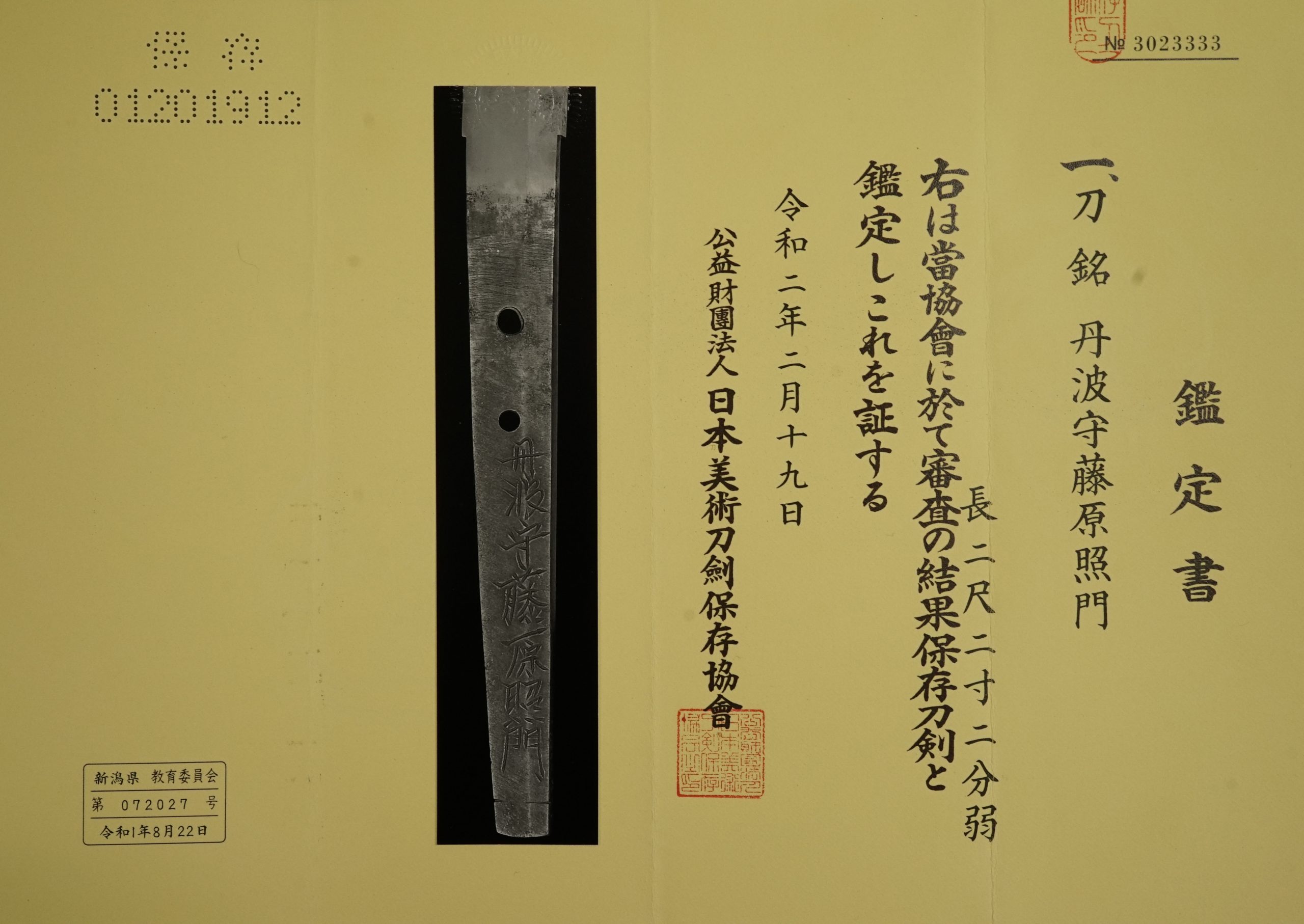 Registration Number : Nigata 072027
The Board of Education in Nigata prefecture issued a registration paper for this sword . In order to obtain this paper, the sword needs to be traditionally hand forged. With this paper, its owner can legally own an authentic Japanese sword in Japan. 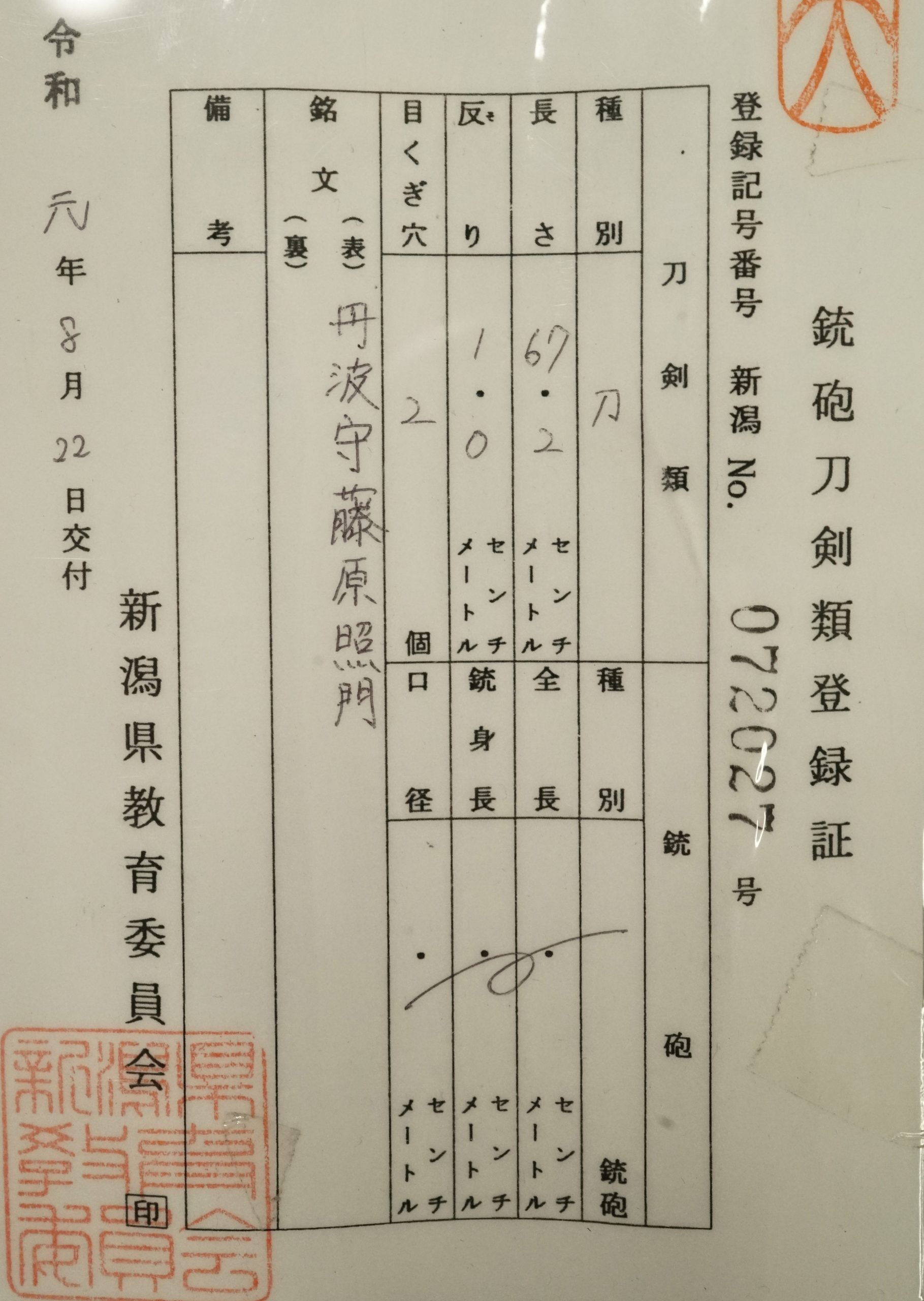 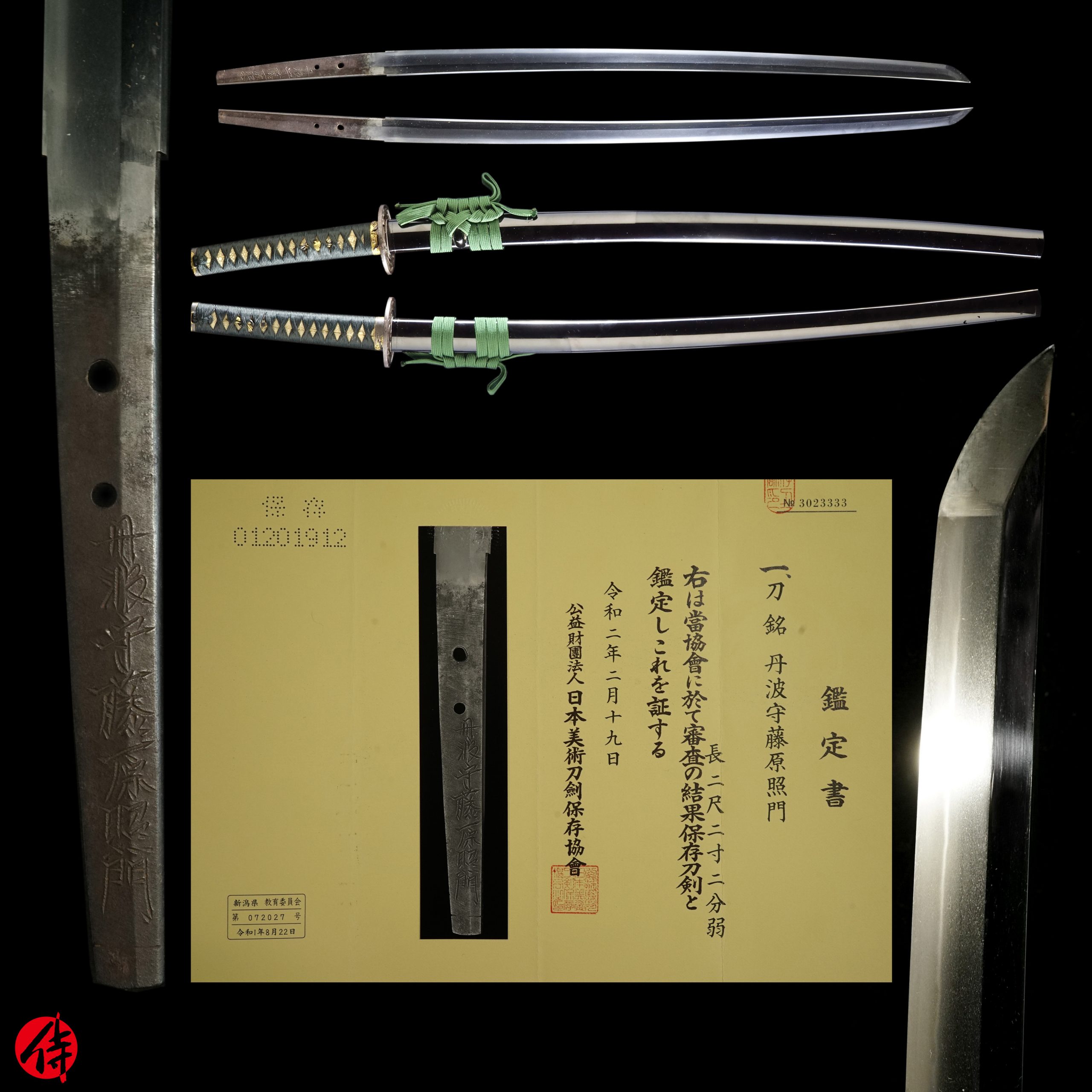 【Japanese Sword& Export Process】
The Japanese swords we deal with are hand-forged edged swords made in Japan. It was made from the traditional carbon steel called TAMAHAGANE(玉鋼). Samurai Museum is familiar with the proper legal procedure for an antique/ authentic Japanese sword to be exported from Japan. We have sent more than 300 Japanese swords to amazing owners who appreciate its historical value.

To legally export the sword from Japan to other countries, we will have to apply for its permit to the Agency for Cultural Affairs(Bunkacho) and return the original registration paper to the Board of Education. It normally takes around 2-4 weeks to receive this permit after submitting required documents. And we would like you to expect at least 1-1.5 months for your order to arrive at your given address after you ordered. For more detailed info, please click here.

【Payment Method】
We accept payment through Stripe(Credit card), PayPal, Apple Pay or ChromePay, all of which are secure payment methods. If you prefer other payment method, please contact us. After confirming your payment, we will apply for an export permit. You may either pay in JPY, USD, AUD, EUR or GBP. The price is set in Japanese Yen. Prices in other currencies are automatically calculated based on the latest exchange rate.

【Shipping】
We have shipped authentic Japanese swords to the USA, Canada(BC, AB,ON), Mexico, Australia, UK, Germany, France and Hong Kong. If you don’t live in these countries and like to order, please contact us first before making a purchase. We offer Free International Shipping as long as we can send antique Japanese swords by either EMS or UPS(USA only).

We normally ship by EMS(Express Mail Service) provided by Japan Post.When we receive an order from the USA, we will use UPS instead as EMS temporarily stops shipping from Japan to the USA due to COVID-19.

We will send you a tracking number for your order as soon as we hand it to the post office/UPS. We will put 100 % insurance on the shipping document without any extra charge. Based on the total amount, there might be a duty tax for you to pay, depending on the countries. We use package cushioning to protect the item and put it in a PVC pipe, which is one of the most secure packages because of its durability.

【How to make sure the condition】
Please keep in mind that what you are going to purchase is an antique item. We uploaded high resolution photos for you to check its condition thoroughly. If you like to see more photos with different angles, please feel free to contact us. We will be happy to send them to you so that you can make informed decision. It is essential for us to know that you are happy with your choice of a sword. and we are prepared to use the best of our ability to serve you.

【The Art of Nihonto(Japanese Sword)】
Samurai’s history is a profound, eloquent legacy of ancient Japanese warriors in which millions of people worldwide are being fascinated. If you like to find out the art of Nihonto, please click here.