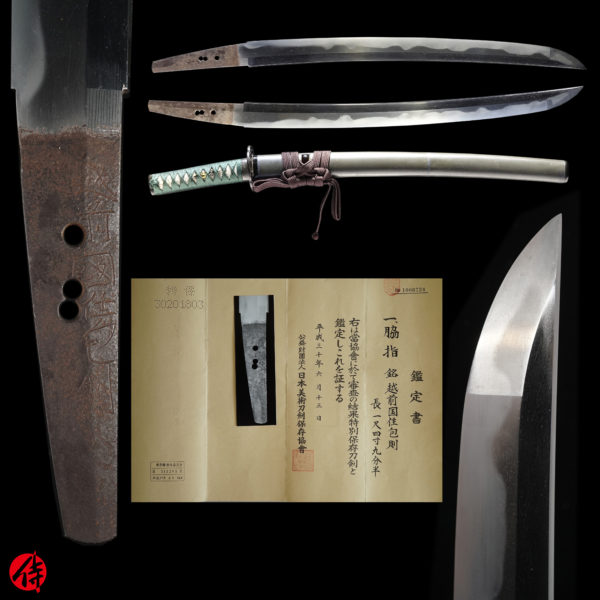 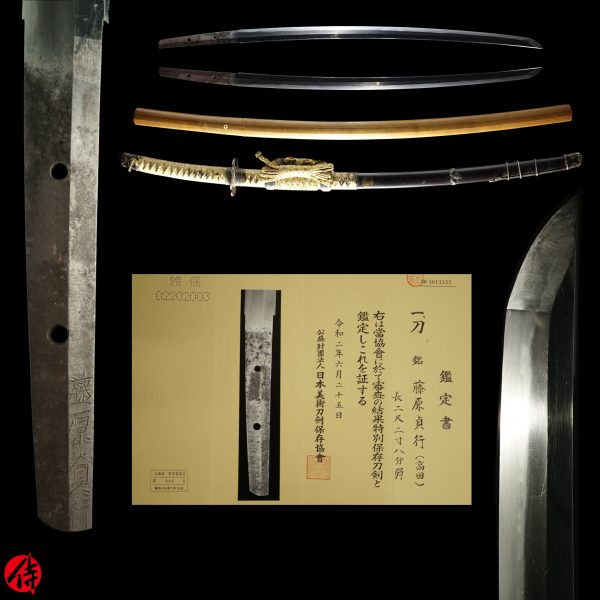 DELIVERY TIME : Approx. 1-1.5 months
*There might be delay in shipment depending on countries

Nobutaka first signed his name as Nobuteru, and when he was 34 years old in 1665, he received the title of Hoki no Kami. Then, he took over Nobutaka, the maker’s name of his father, and became the third generation Nobutaka.
In the same year, he was hired by Owari second-gen Tokugawa Mitsutomo(the feudal lord in Owari domain) as Okakaekaji. Okakae Kaji means he exclusively forged swords for the Owari Tokugawa clan, the most powerful family in that region during the Edo period.

As Owari province(today’s Aichi prefecture) was active in martial arts during the early Edo period, there was much demand among high-class Samurai to order swords forged by the third-gen Nobutaka. He often worked with his father(the second-gen Nobutaka), and there is some remaining work where you can see both signatures.

The first-gen Nobutaka was originally from Mino province, which is famous for Japanese sword tradition, MINO-DEN. 1st-5tb generation Nobutaka received the title of Hoki no Kami.
The name of Kami was given by an emperor to those who were excellent at sword making. Nobutaka is one of the most famous swordsmiths in Owari province in the early Edo period.

NTHK appraised this blade forged by the third-gen Hoki no Kami Nobutaka based on its styles, such as Hamon, Jigane, and shape, while there is no marking on the tang. 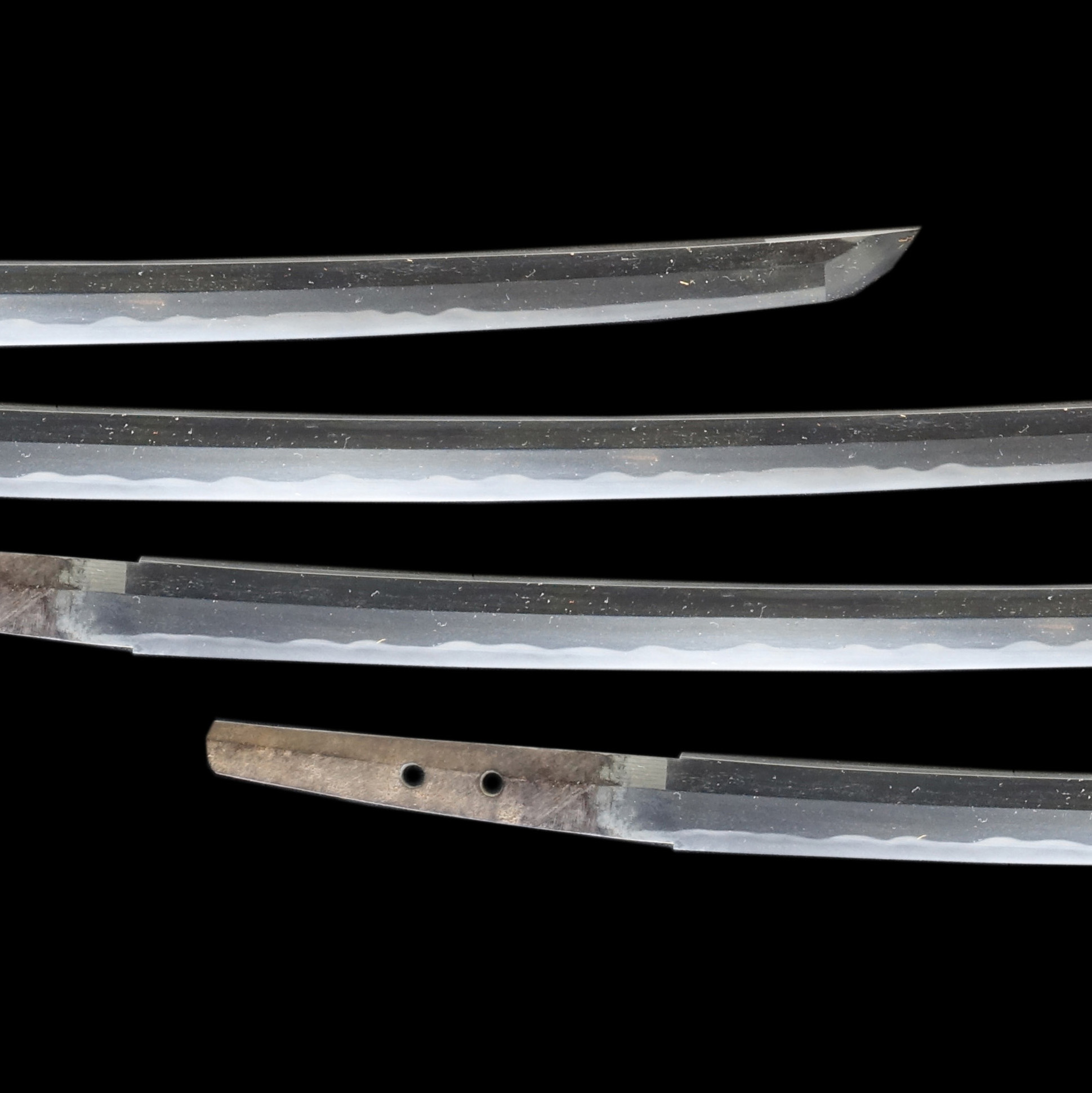 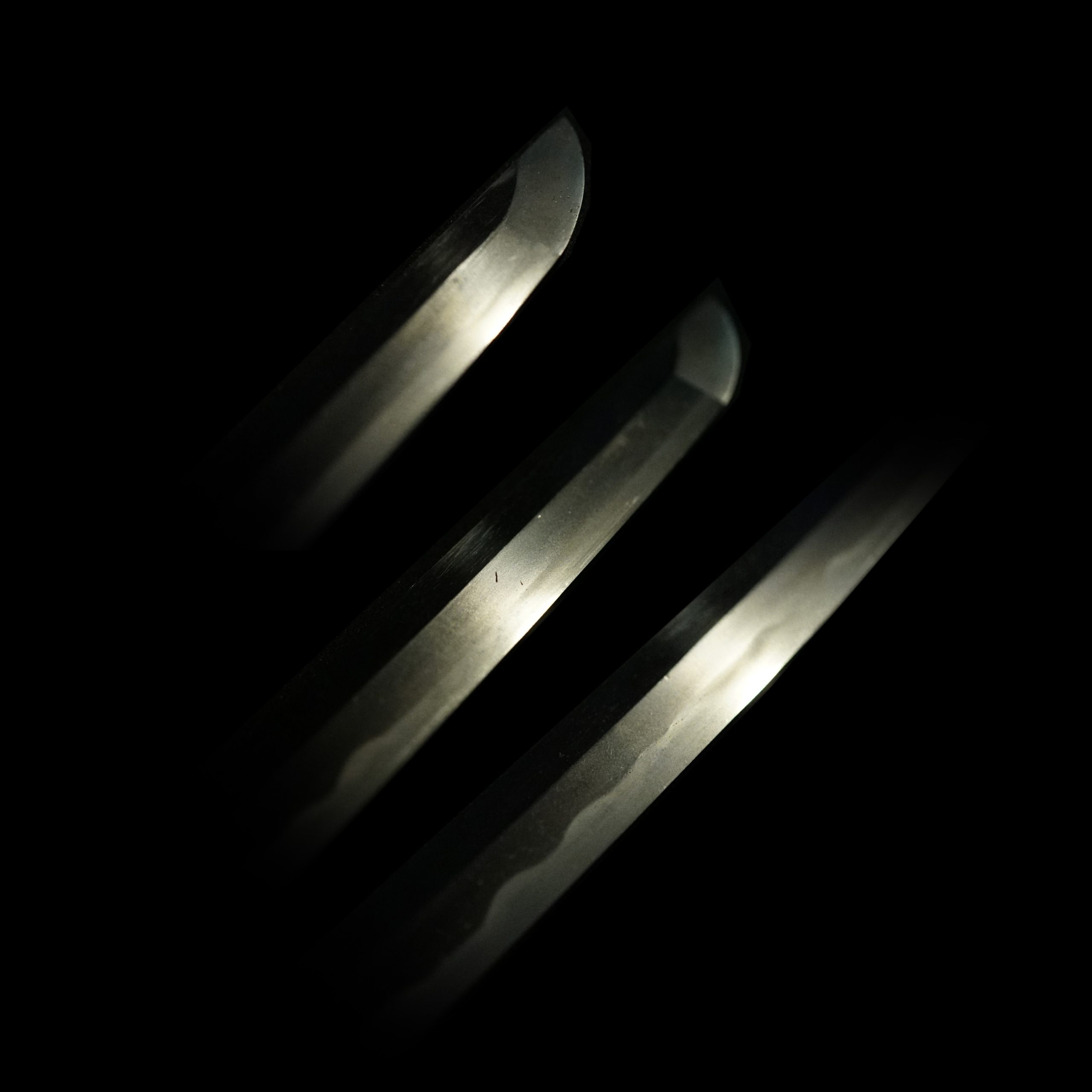 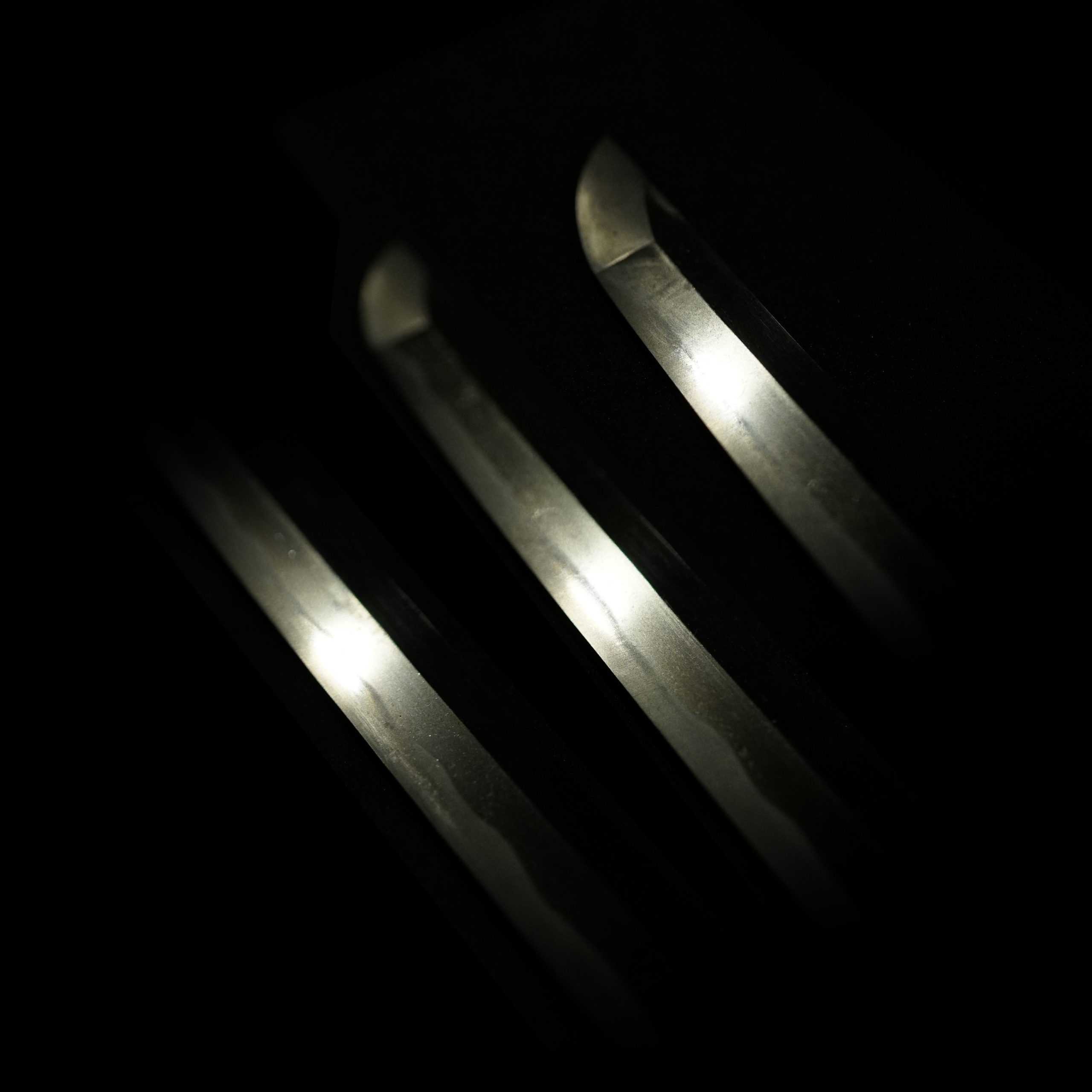 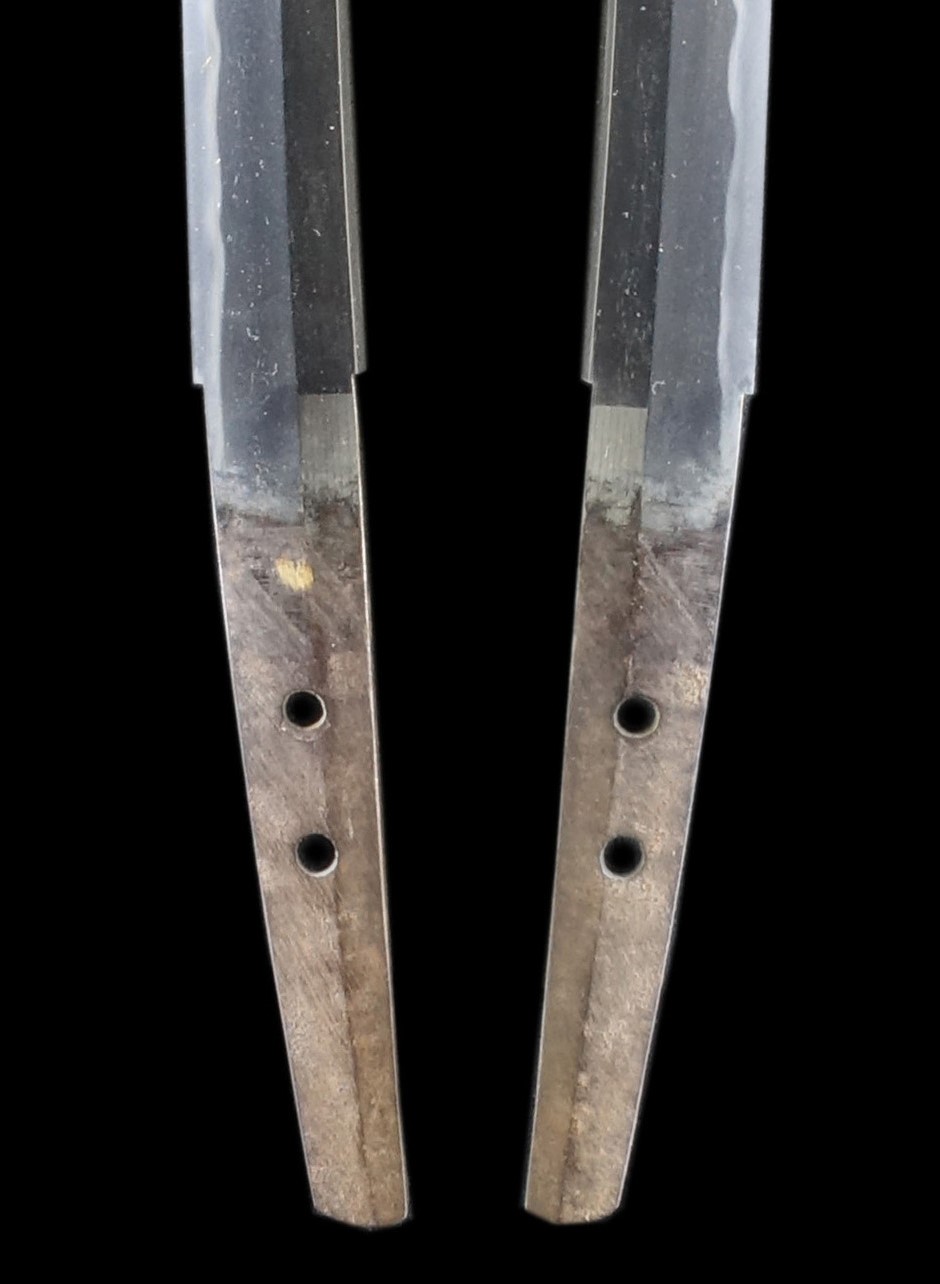 There are several parts that consist of Koshirae such as Saya(Sabbard), Tsuka( Handle), Tsuba(Handguard). They are coated with stingray skin and silver. 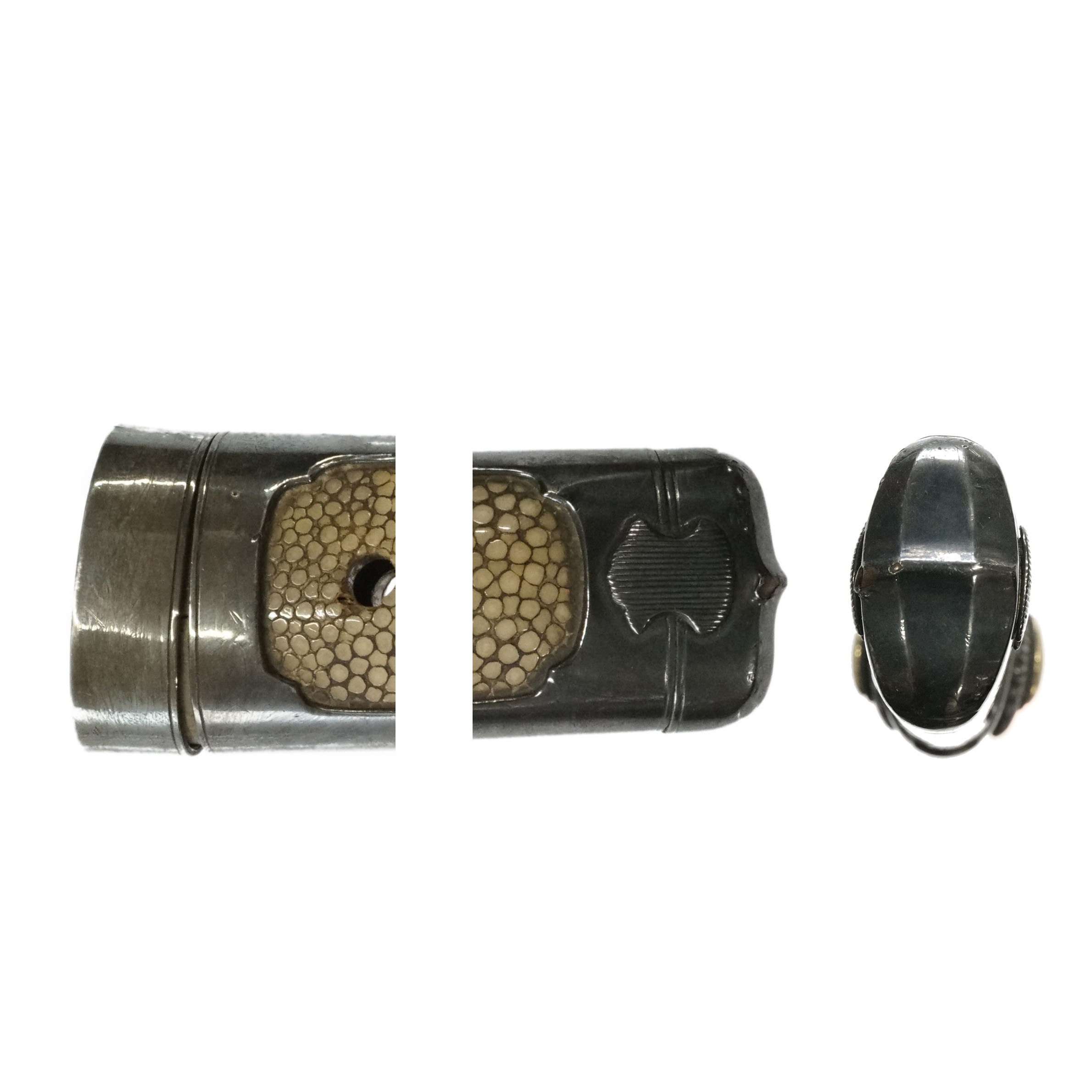 The chrysanthemum pattern is designed on both sides. A long time ago, the chrysanthemum was used as a medicine for long life in China. It was brought to Japan with this thought in the Nara period (648-781). This flower symbolizes fall, and people appreciate it very much since ancient times. As its petals form radially, the chrysanthemum has been likened to the sun. That is why this flower pattern is treated as the symbol of perpetual youth and longevity or good health. Kiku no Gomon (菊の御紋) is a kind of chrysanthemum pattern, and it is used as the emperor’s crest and the royal family in Japan; therefore, it is well-known as a noble pattern. 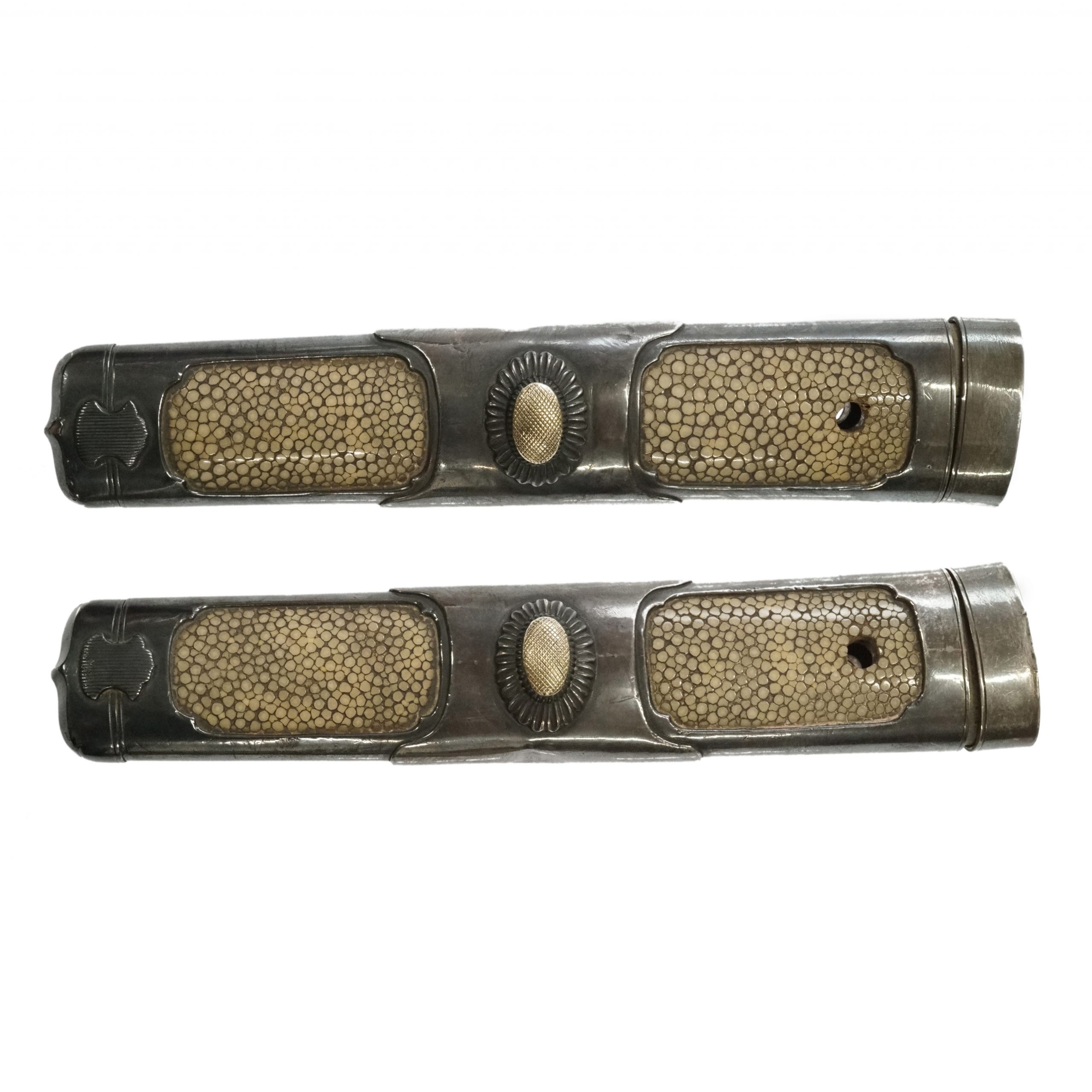 Dragons are designed. On the surface, it looks two dragons are chasing to get a gem. Initially, a dragon is an imaginary creature that is found in ancient Chinese traditions or myths. It is a beast that symbolizes auspicious signs. Its body is likened to nine animals: antlers are deer, the head is a camel, eyes are demons, the neck is a snake, belly is Mizuchi (mythical animal in Japan which looks like a snake and have a horn and four legs), scales are fish, claws are falcons, palms are tigers, and ears are cows. It was thought that the dragon would reign at the top of all animals because of its odd-looking appearance. In Japan, people appreciate the dragon motif due to its meaning as the all-purpose auspicious pattern. 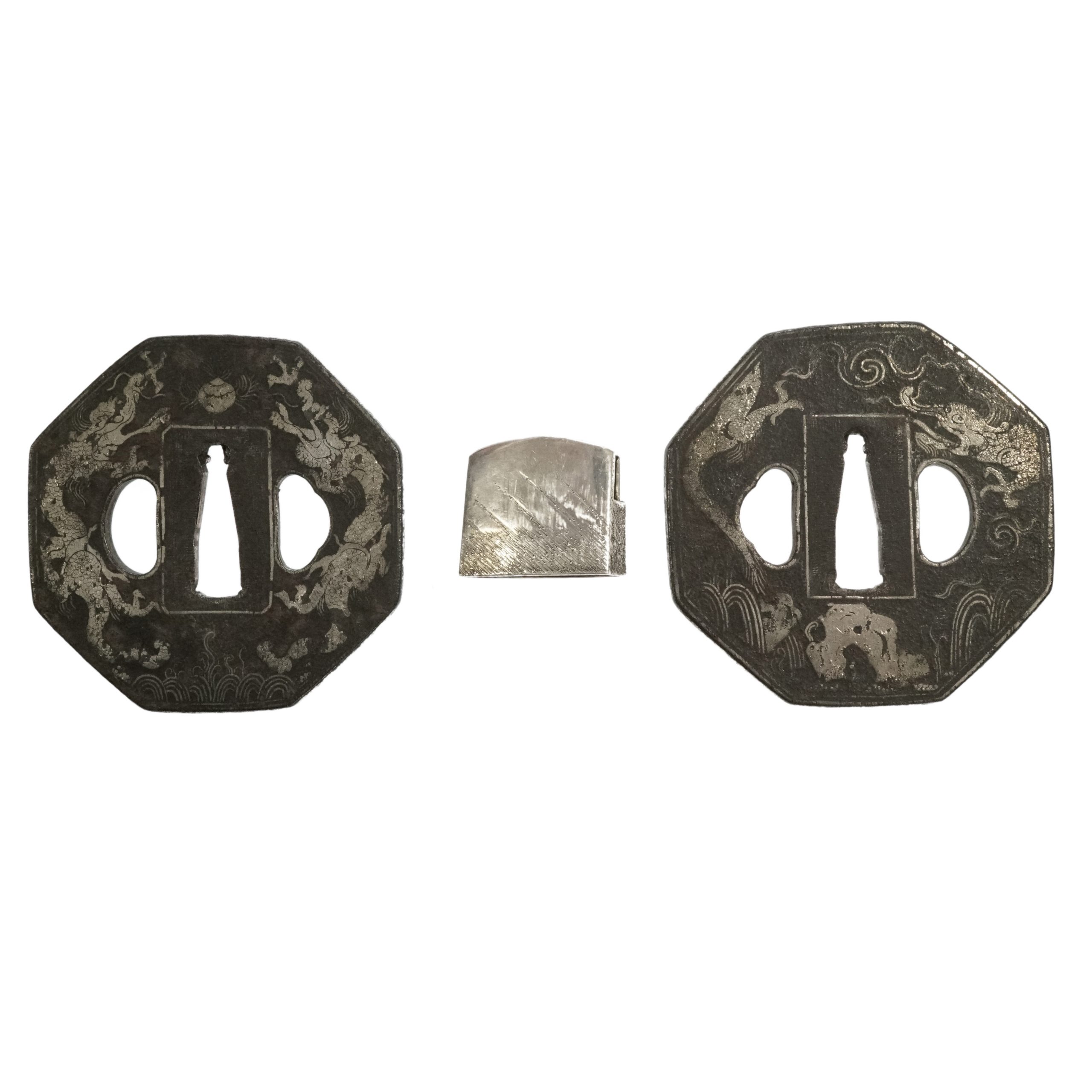 Saya：Saya is the scabbard for the Japanese sword. It is coated with stingray skin. 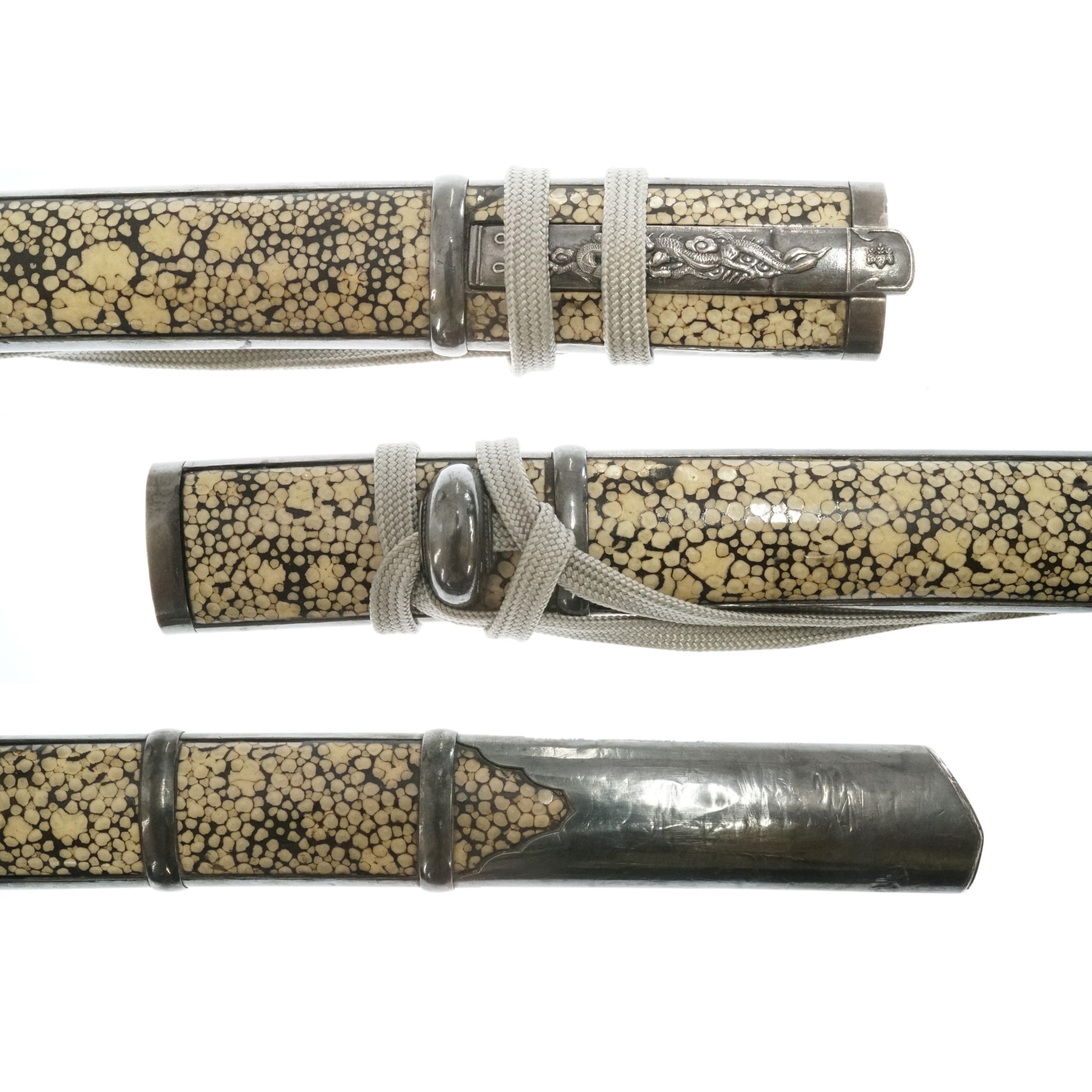 Kozuka：Kozuka is a small knife stored in Koduka Hitsu (groove of the sheath of the Japanese sword).

The Kozuka (case for the knife) is decorated with a dragon pattern. Also, the paulownia pattern is found. This plant motif was used as an imperial pattern and eventually became the pattern to be given by the emperor to the administration’s ruler as proof. The paulownia design has been treated as a noble pattern. 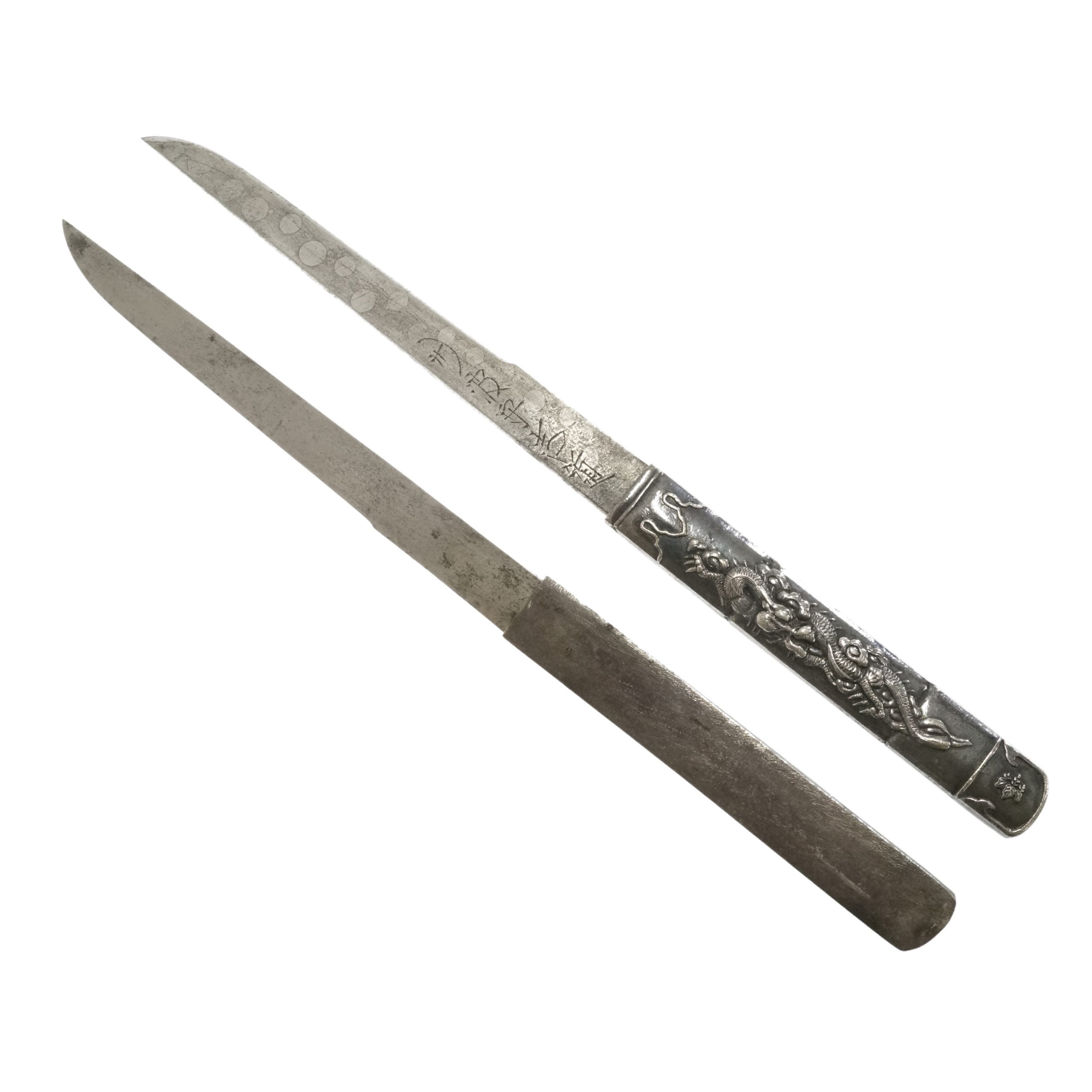 NTHK, also known as Nihon Touken Hozon Kai (the Society for the Preservation of the Japanese Sword), is one of the oldest Japanese sword appraising organizations in modern-day Japan. They authenticated the blade on September 20th in the second year of Reiwa(2020). They appraised it as the Kanteisho class, the blade worth preserving for Japanese society. The purchaser will receive this original certificate as well. We can also translate what is written into English and make a PDF file for your record if you request. 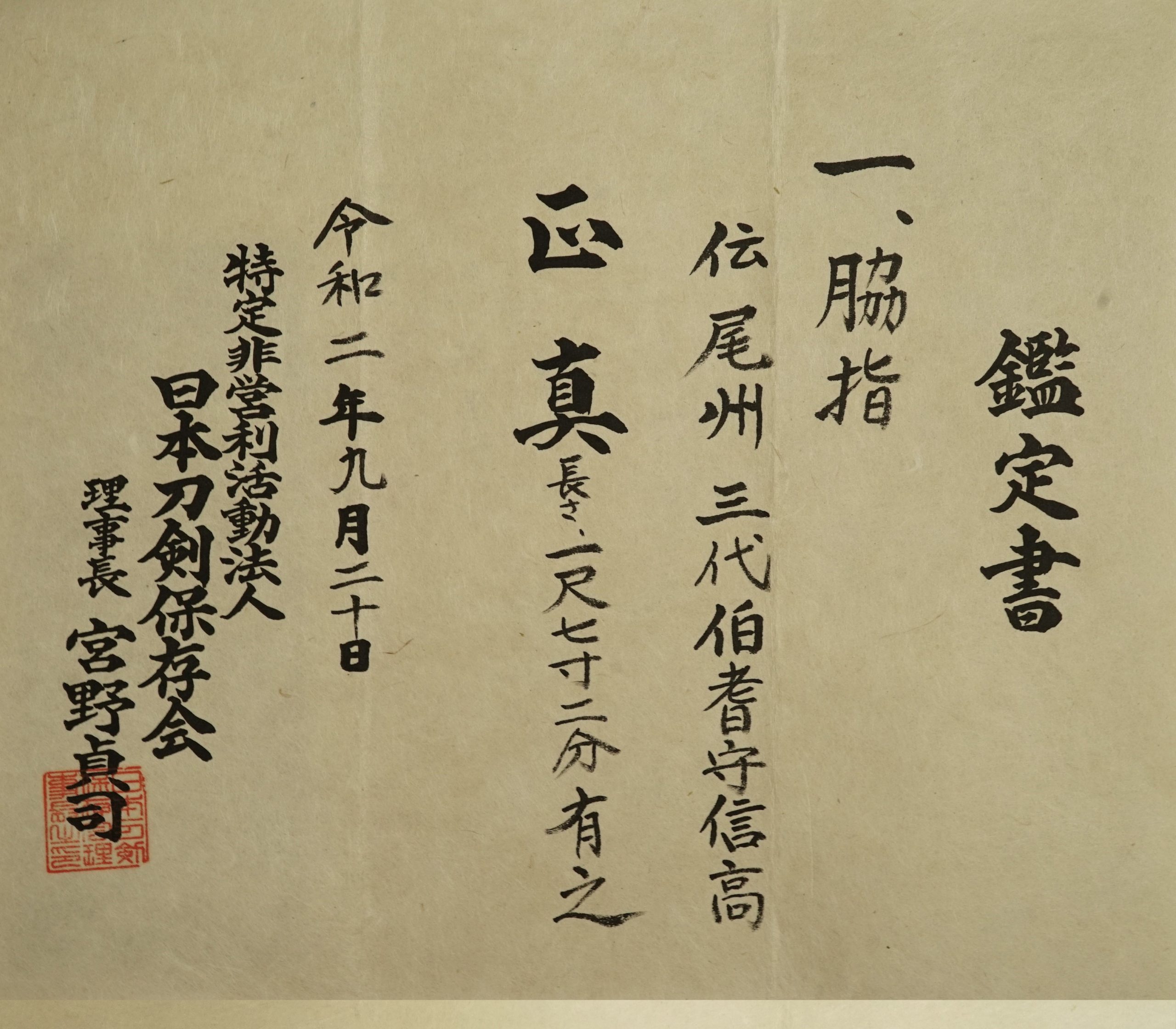 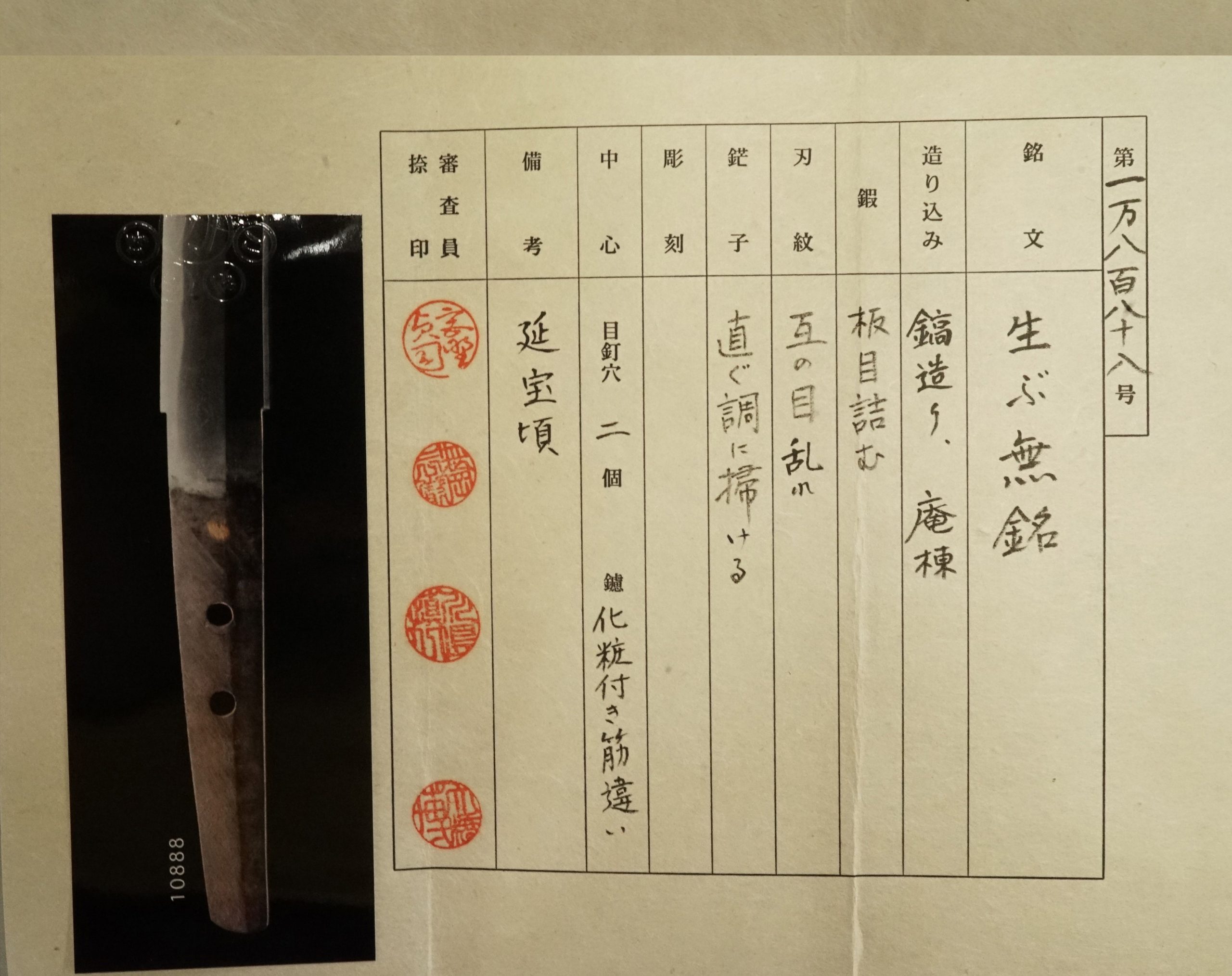 Registration Number : Shizuoka 54211
The Board of Education in Shizuoka prefecture issued a registration paper for this sword . In order to obtain this paper, the sword needs to be traditionally hand forged. With this paper, its owner can legally own an authentic Japanese sword in Japan. 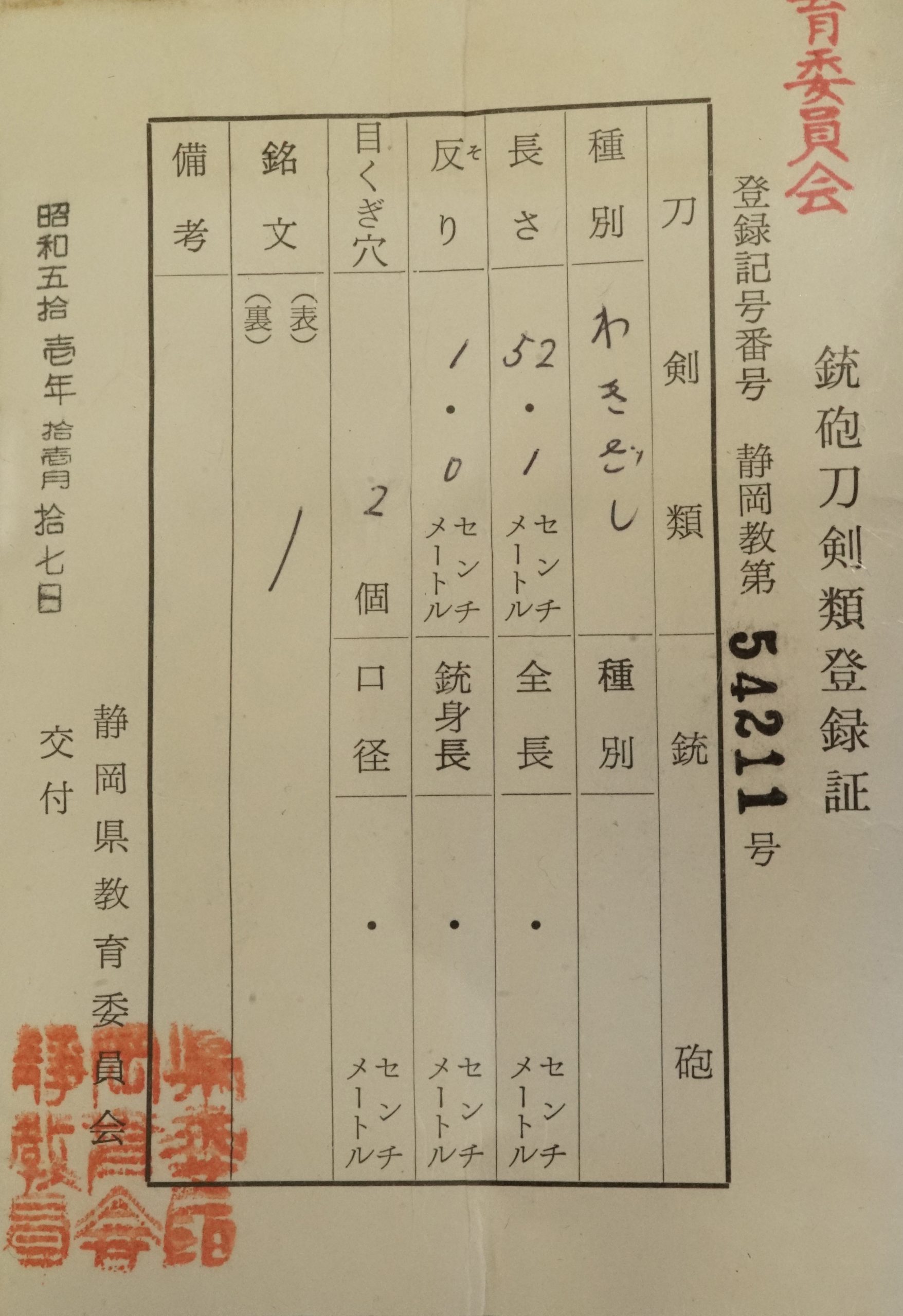 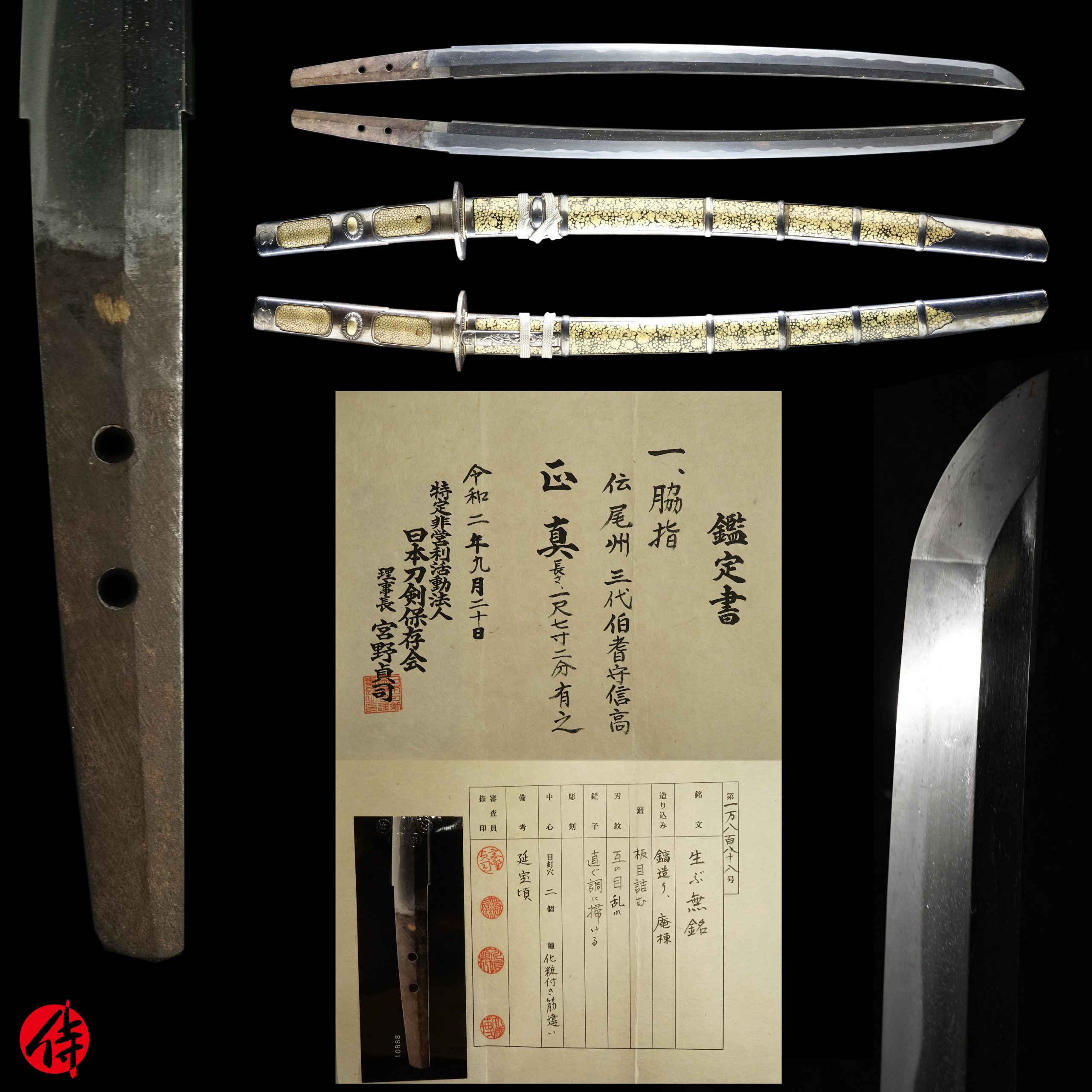 【Japanese Sword& Export Process】
The Japanese swords we deal with are hand-forged edged swords made from the traditional carbon steel called TAMAHAGANE(玉鋼). Samurai Museum is familiar with the proper legal procedure for an antique/ authentic Japanese sword to be exported from Japan. We have sent more than 300 Japanese swords to amazing owners who appreciate its historical value.

To legally export the sword from Japan to other countries, we will have to apply for its permit to the Agency for Cultural Affairs(Bunkacho) and return the original registration paper to the Board of Education. It normally takes around 1-1.5 months to receive this permit. And we would like you to expect at least 2-3 months for your order to arrive at your given address after you ordered. For more detailed info, please click here.

【Payment Method】
We accept payment through Stripe(Credit card) or PayPal, both of which are secure payment methods. If you prefer other payment method, please contact us. After confirming the payment from you, we will apply for an export permit. You can either pay in JPY, USD, EUR or GBP. The price is decided in Japanese Yen. The price in other currencies is calculated automatically based on the exchange rate.

【Shipping】
We have shipped authentic Japanese swords to the USA, Canada, Mexico, Australia, UK, Germany , France and Hong Kong. If you don’t live in these countries and like to order, please contact us first before making a purchase. We offer Free International Shipping as long as we can send antique Japanese swords by either EMS or FedEx(USA, Australia, Canada).

We normally ship by EMS(Express Mail Service) provided by Japan Post. When we receive an order from the USA, Australia or Canada we will use FedEx instead as EMS temporarily stops shipping from Japan to those countries due to COVID-19.

We will send you a tracking number for your order as soon as we hand it to the post office/FedEx. We will put 100 % insurance on the shipping document without any extra charge. Based on the total amount, there might be a duty tax or other fee for you to pay, depending on the countries. We use package cushioning to protect the item and put it in a PVC pipe, which is one of the most secure packages because of its durability.

【How to make sure the condition】
We uploaded high resolution photos for you to check its condition thoroughly. If you like to see more photos with different angles, please feel free to contact us. We will be happy to send them to you so that you can make informed decision. If you are currently living in Japan or visiting, you can visit our actual shop in Tokyo to inspect the sword with reservation.

It is essential for us to know that you are happy with your choice of a sword. and we are prepared to use the best of our ability to serve you.