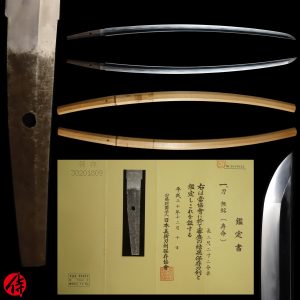 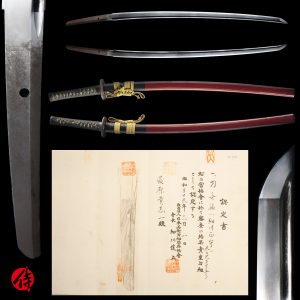 DELIVERY TIME : Approx. 1-1.5 months
*There might be delay in shipment depending on countries

The Katana attributed to the work of Kanewaka

According to the appraisal in the Kofuda, it was attributed to the work of Kanewaka in the Tenpo era(1831-1845). The swordsmith name “Kanewaka” lasted a few generations during the Edo period(Early 17th century-late 19th century).

The Wakizashi attributed to the work of Sukemune

According to the appraisal in the Kofuda, it was attributed to the work of Sukemune in the Tenbun era(1532-1555).

Sukemune belonged to Shimada school in the Suruga domain(today’s Shizuoka prefecture). Its foundation dates back to the mid-Muromachi period, and it was founded by Yoshisuke. The first-gen Sukemune was the younger brother of Yoshisuke. The swordsmith’s name Sukeume lasted a few generations until the Edo period.

Daisho is a pair of two Japanese swords Samurai carried. During the Edo period, having Daisho in public places was considered social status for Samurai. Furthermore, Samurai were required to wear them under the law back then. Daisho is written as 大=Big and 小=Small. Dai part means Katana, and Sho part means Wakizashi. While both swordsmiths don’t have remaining signatures, they come with a pair of Daisho Koshirae(sword mountings).

That means Samurai back then might have carried these pair of Daisho. They have such a fancy appearance that we believe a high-ranked Samurai owned them.

Hon-Ami school has been trusted Japanese sword appraisers since 1596(Late Azuchi Momoyama period). They issued Origami, authentication paper for Japanese swords in medieval times in Japan during the Edo period. 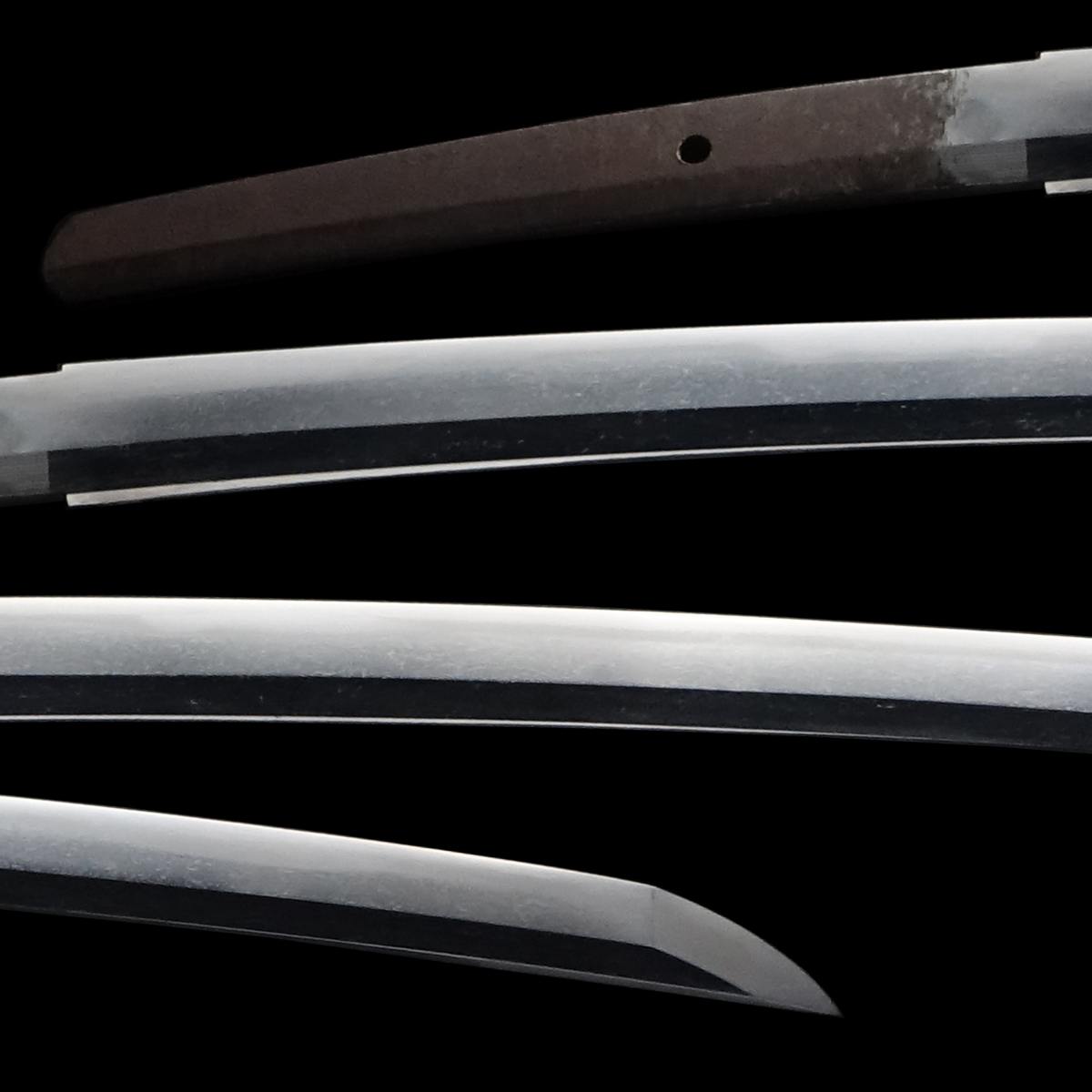 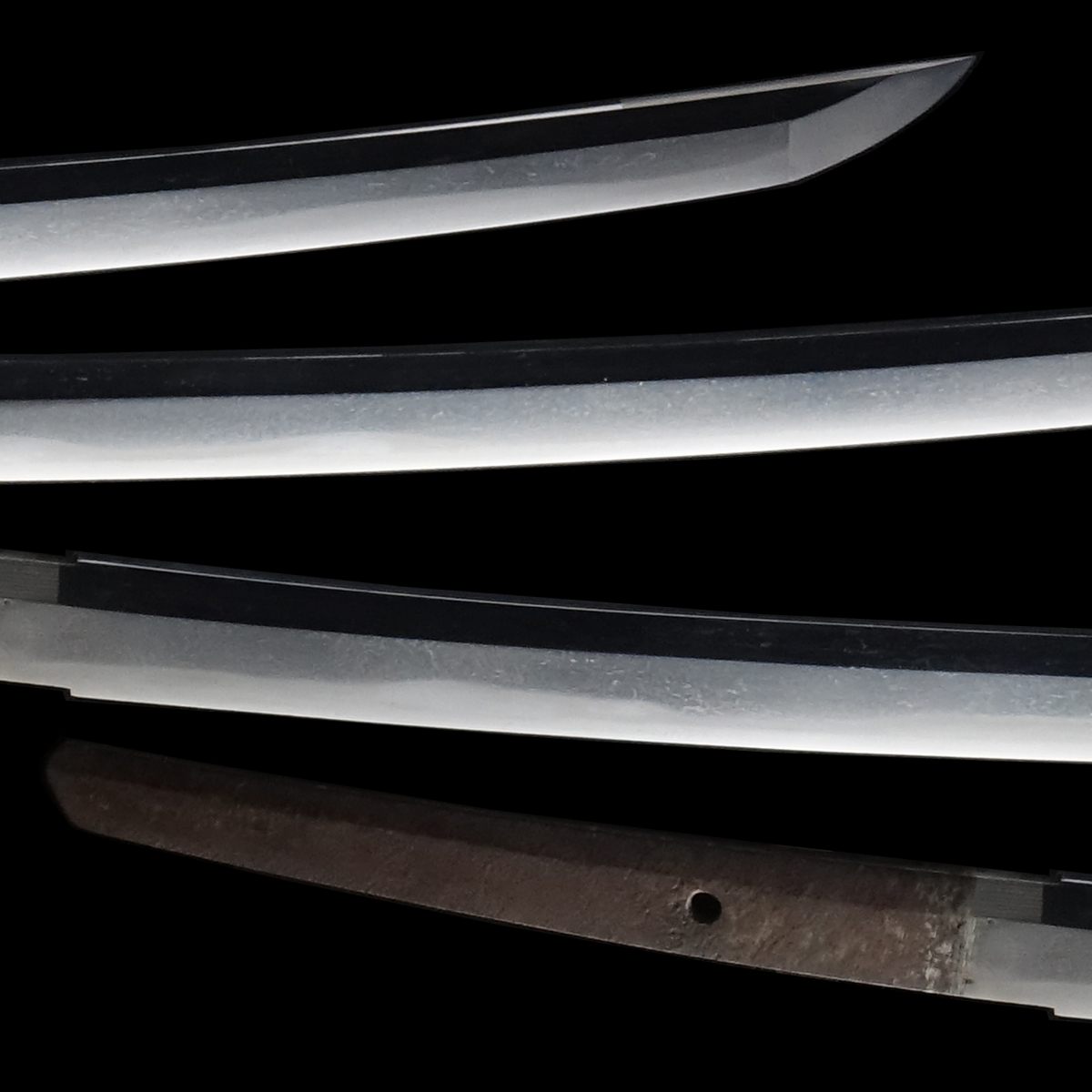 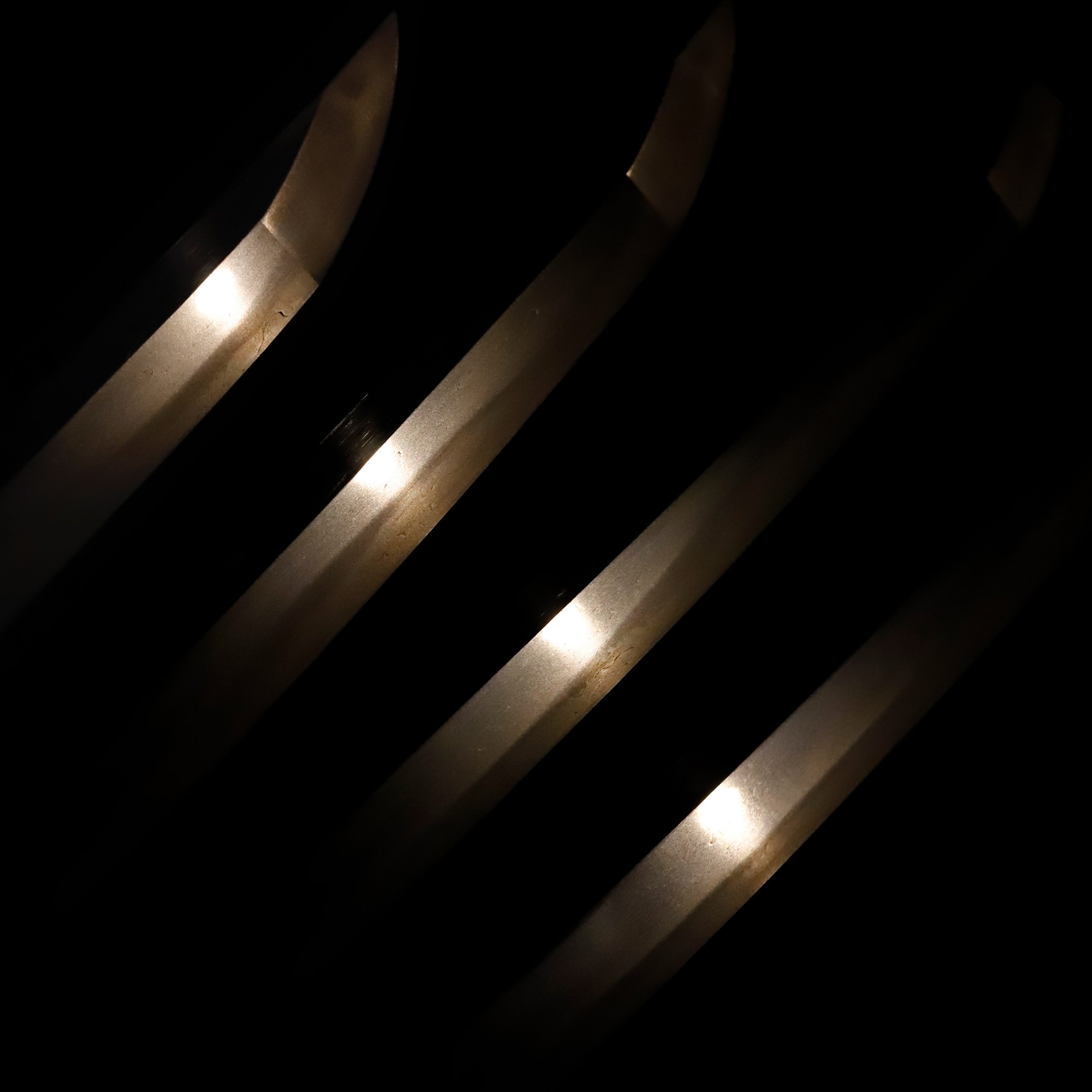 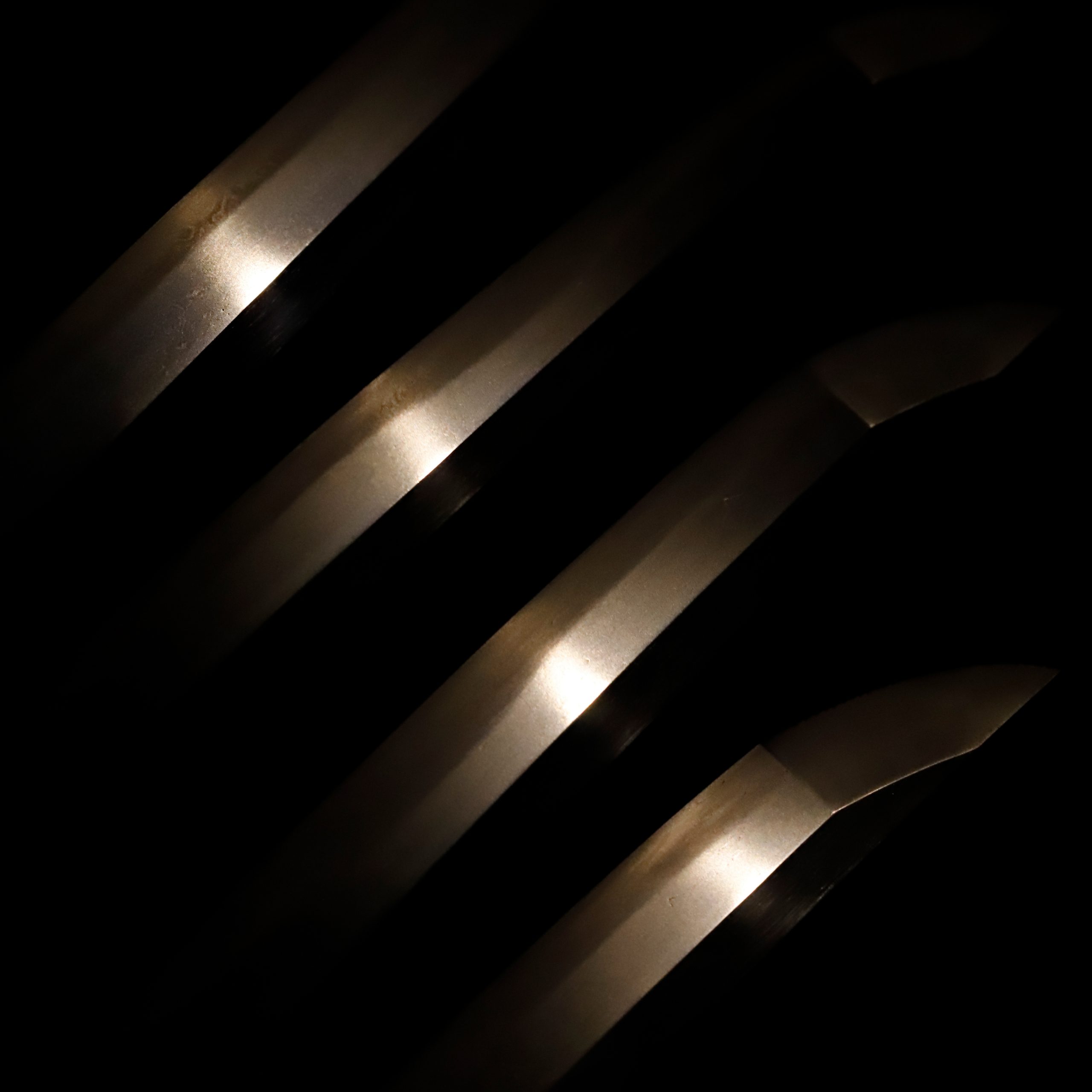 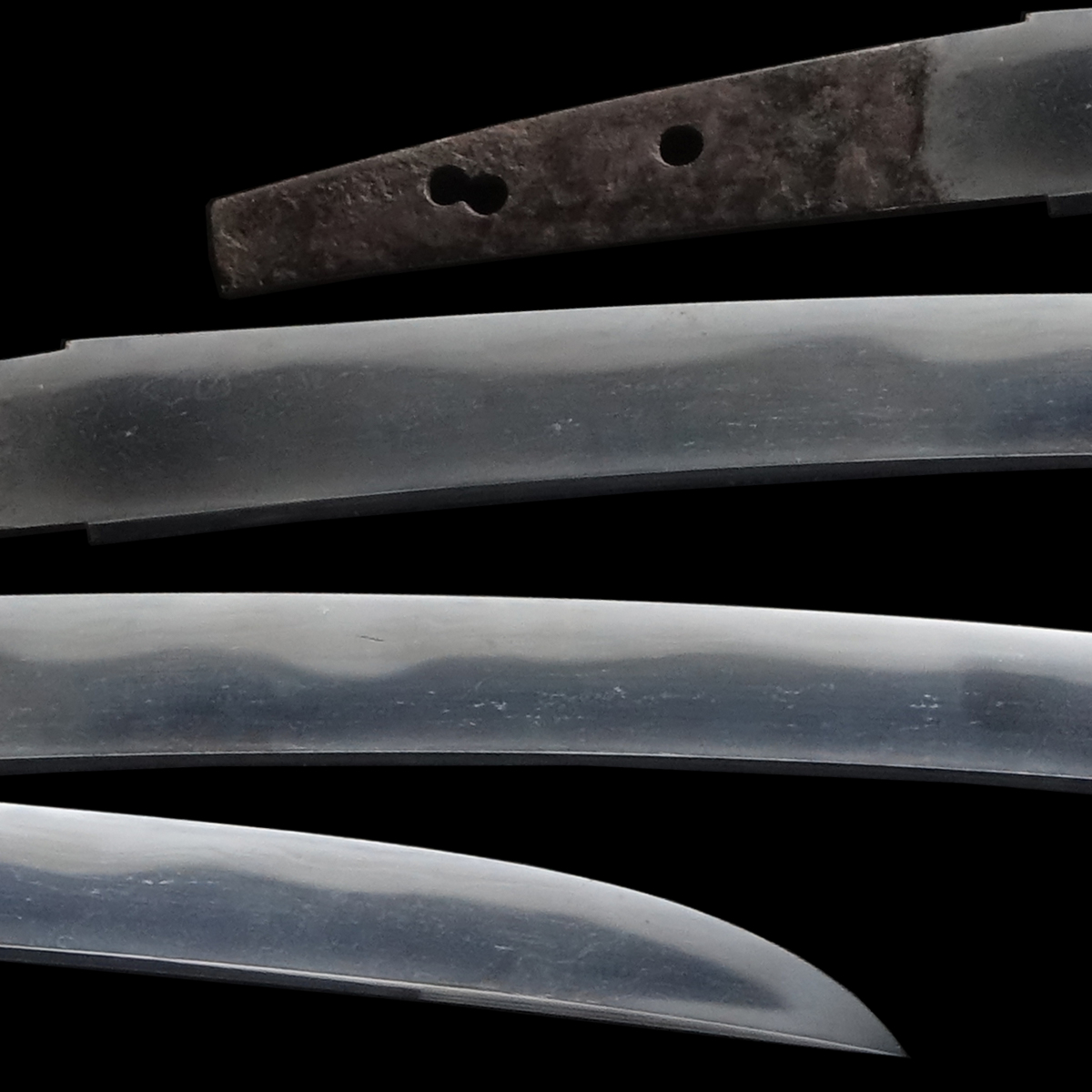 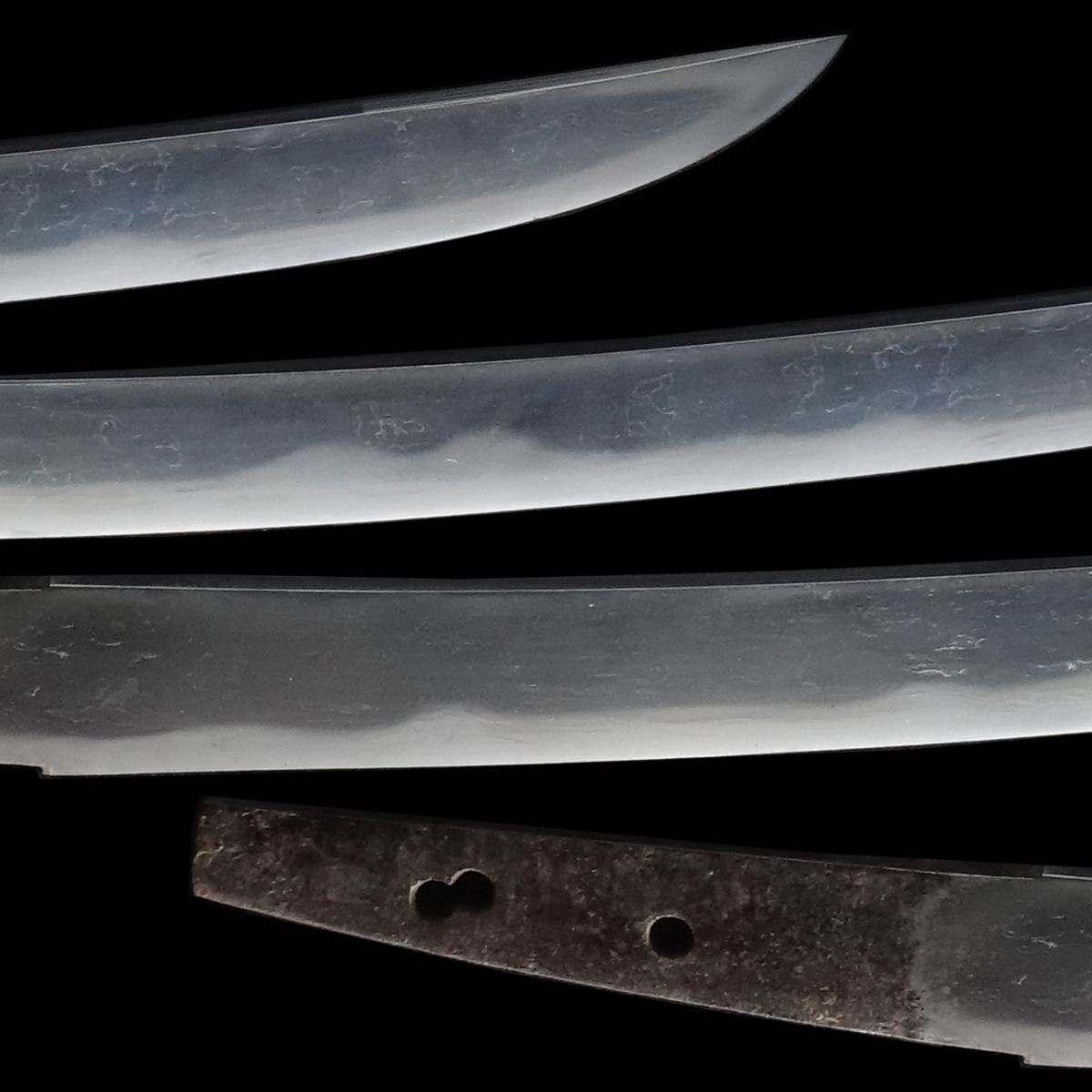 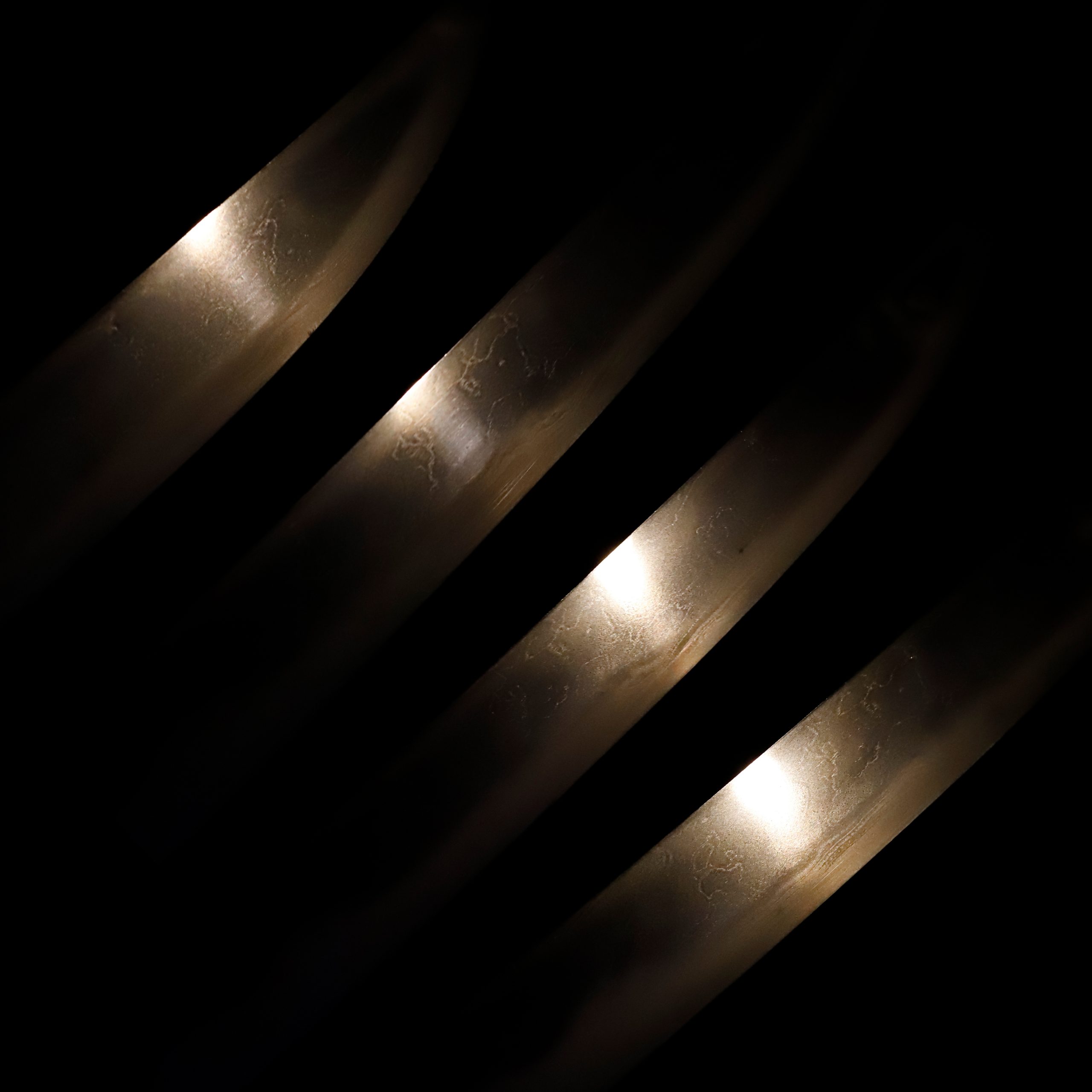 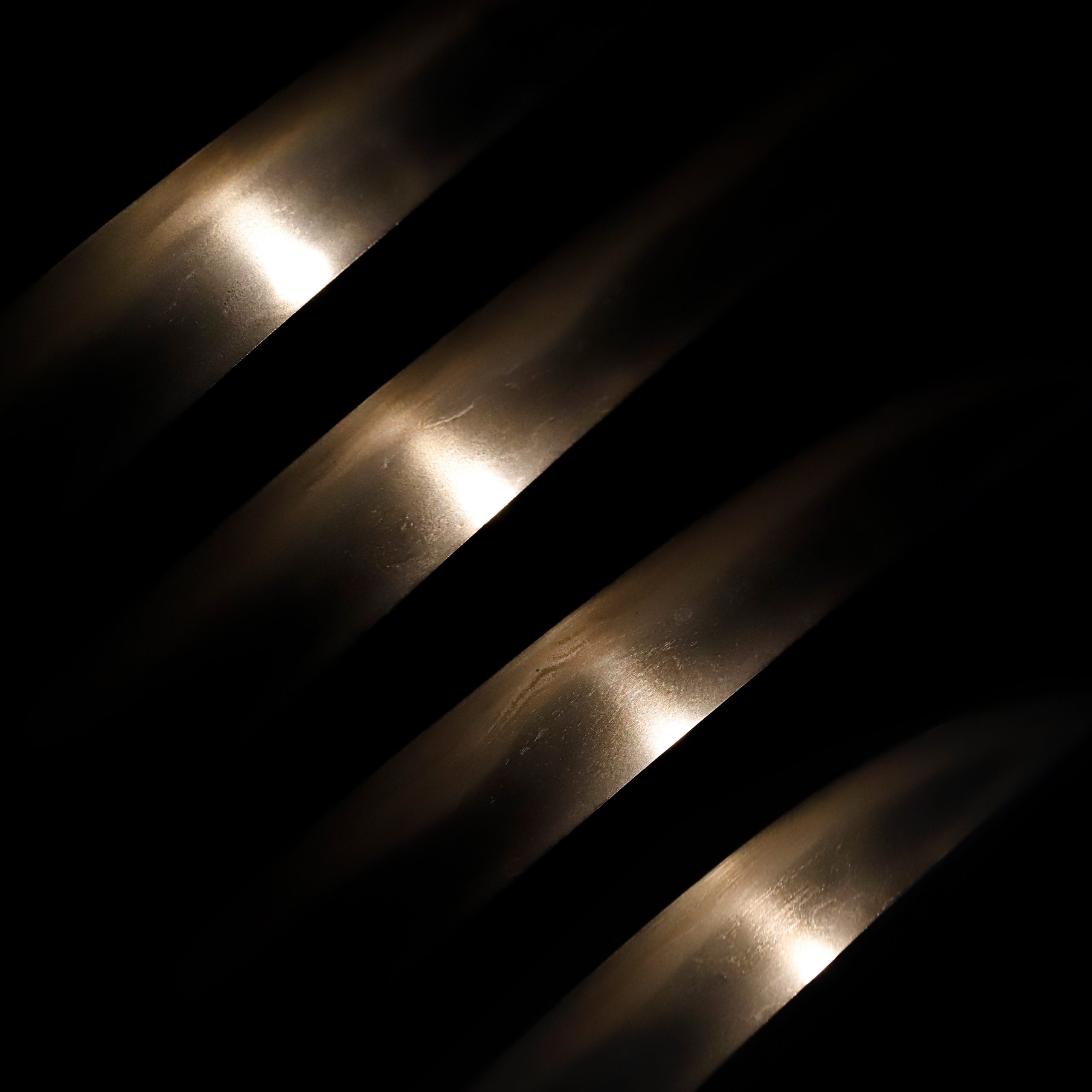 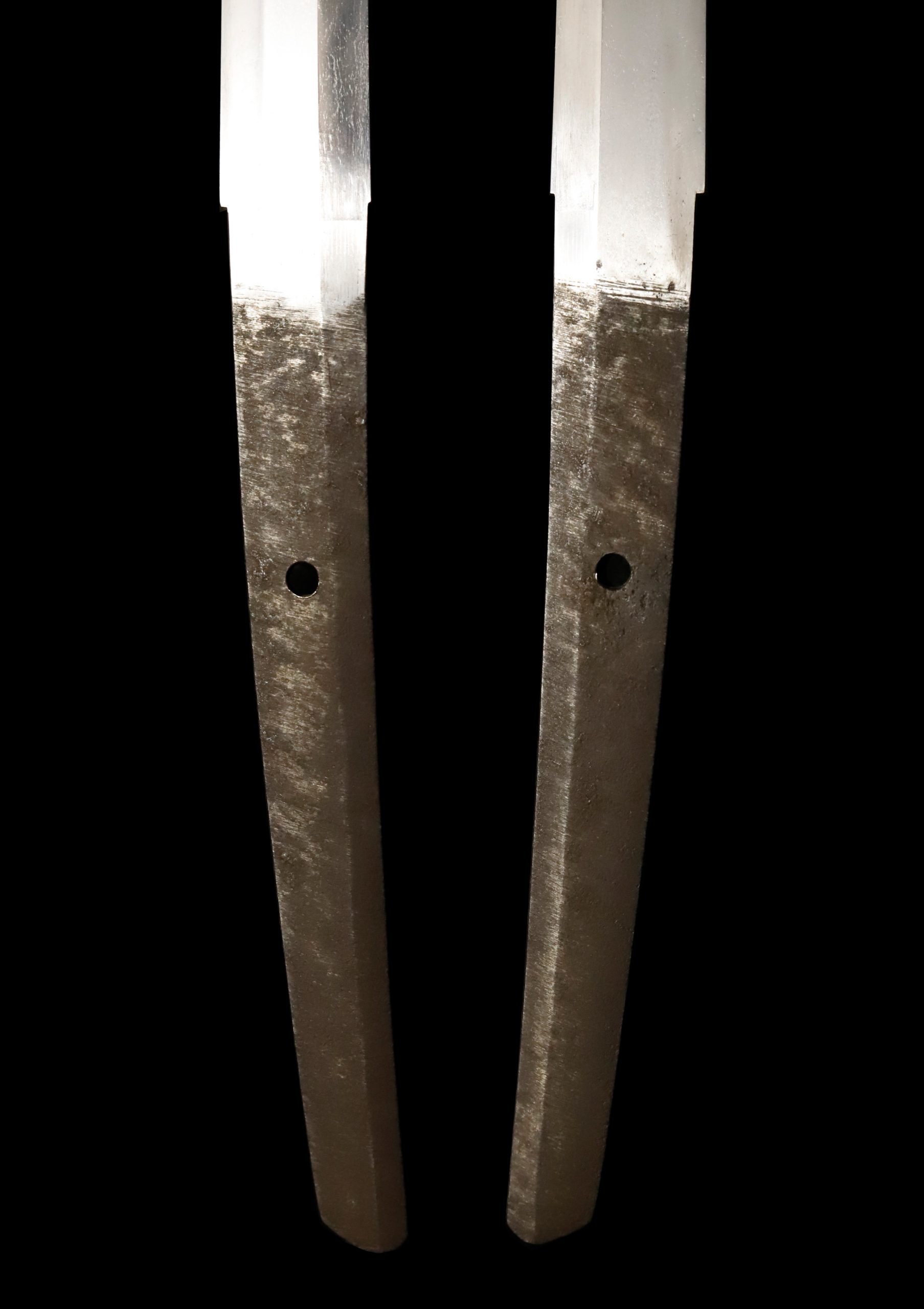 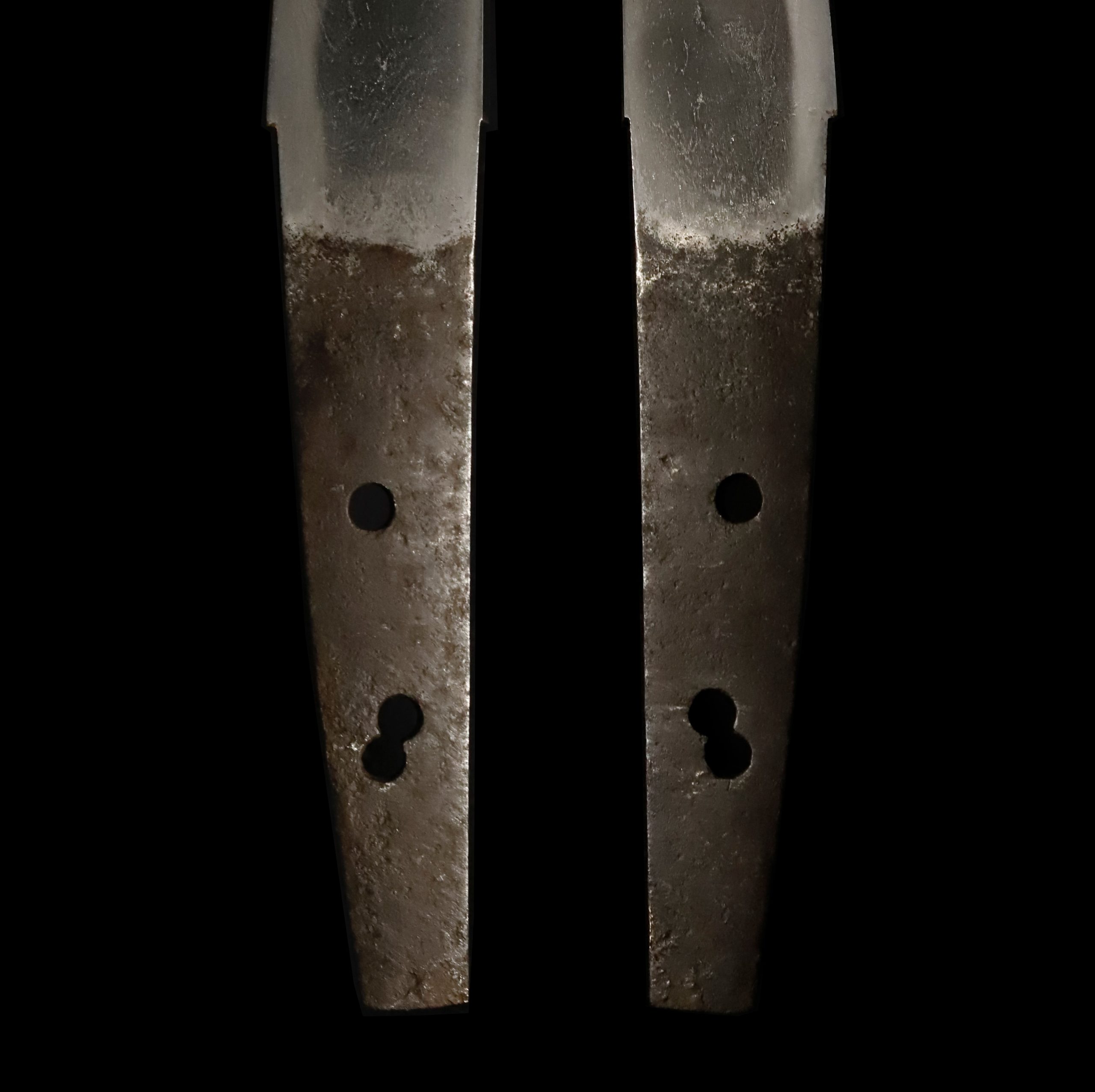 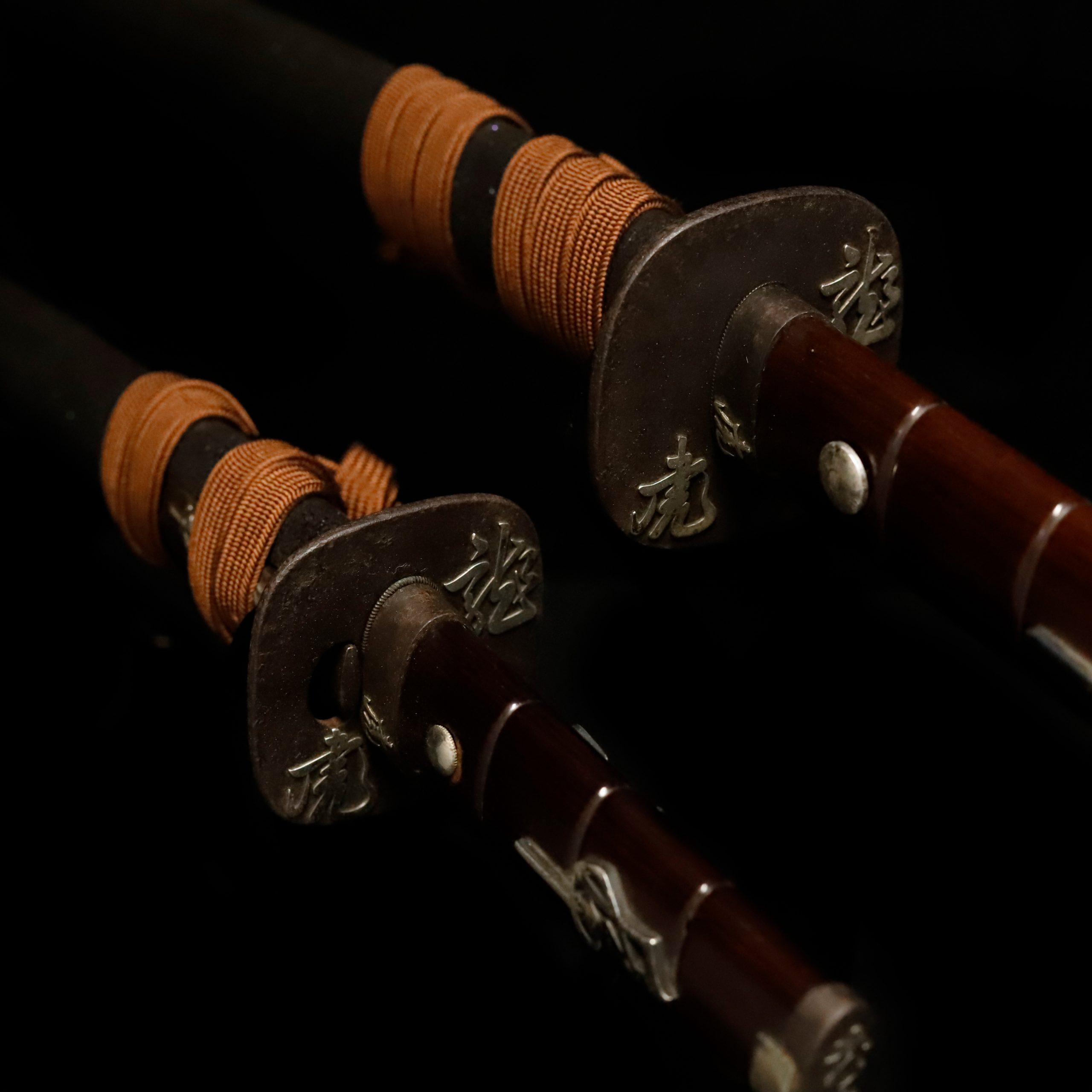 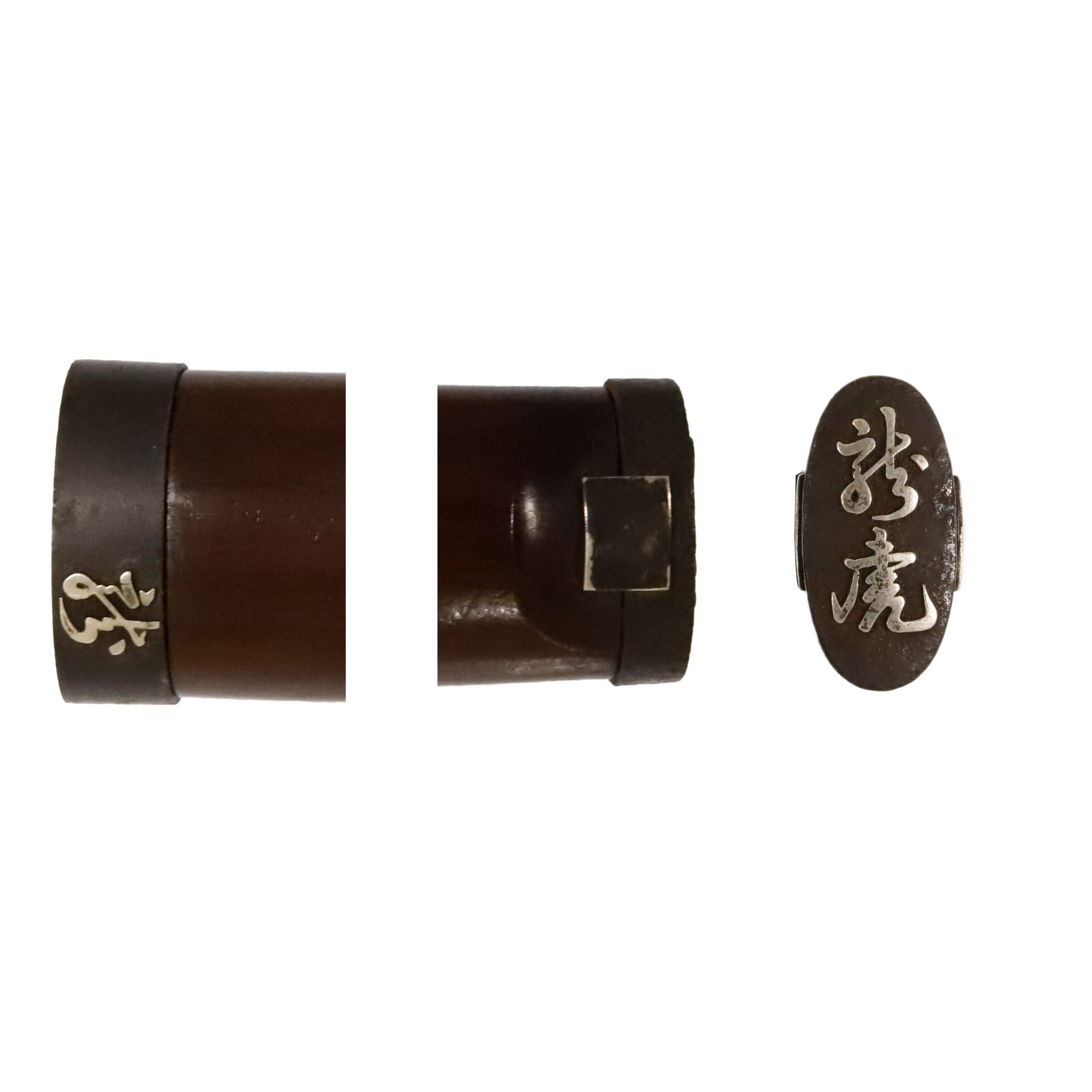 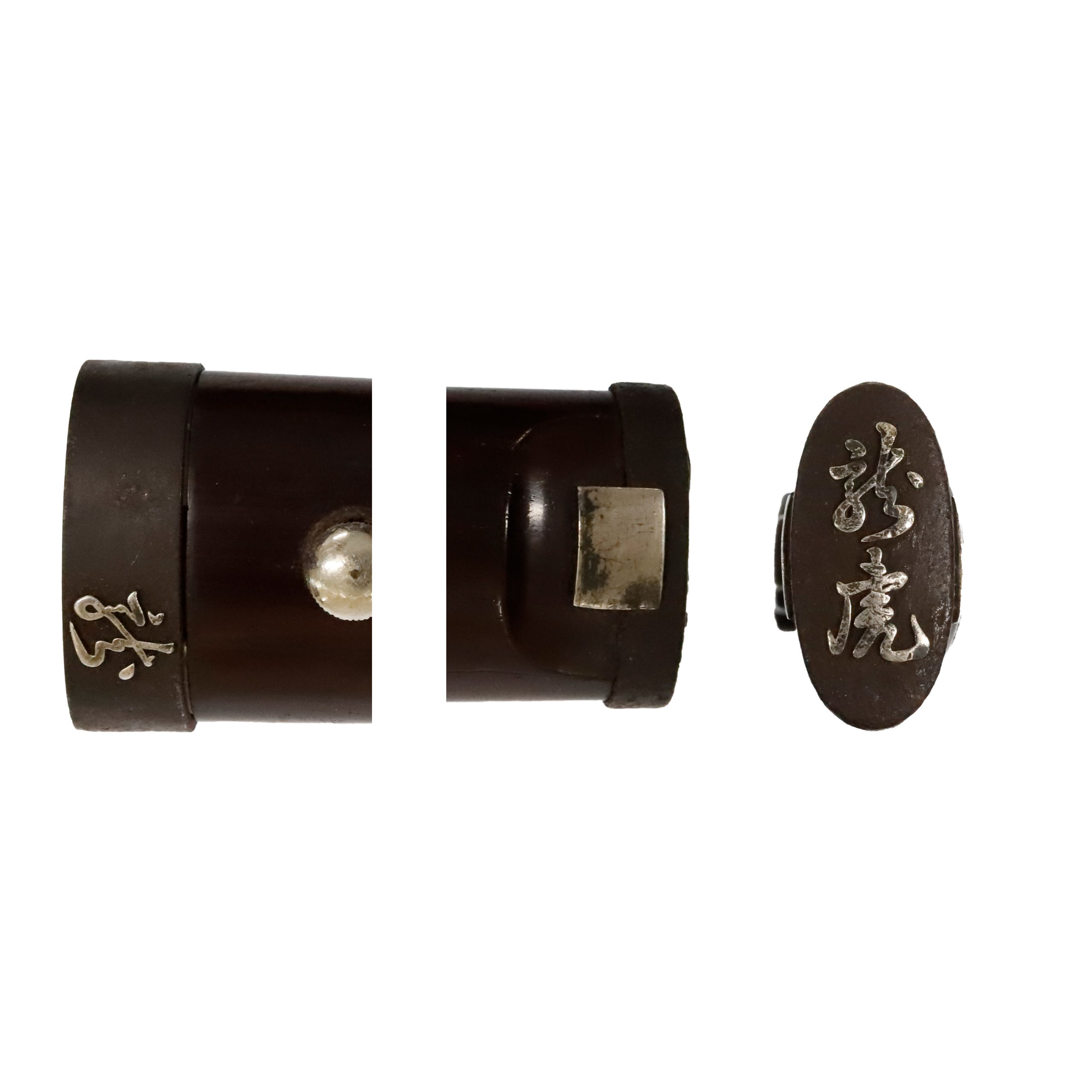 Same as Fuchi Kashira, Japanese letters are used as motifs of Menuki. It seems one of the letters is 竜 (Ryu, means a dragon same as 龍), and the other one might be 虎. According to a theory, the difference between 龍 and 竜 is, 龍 represents the oriental sacred beast, and 竜 is a western fantasy creature. It is also said 龍 is the old, more complicated form of 竜. 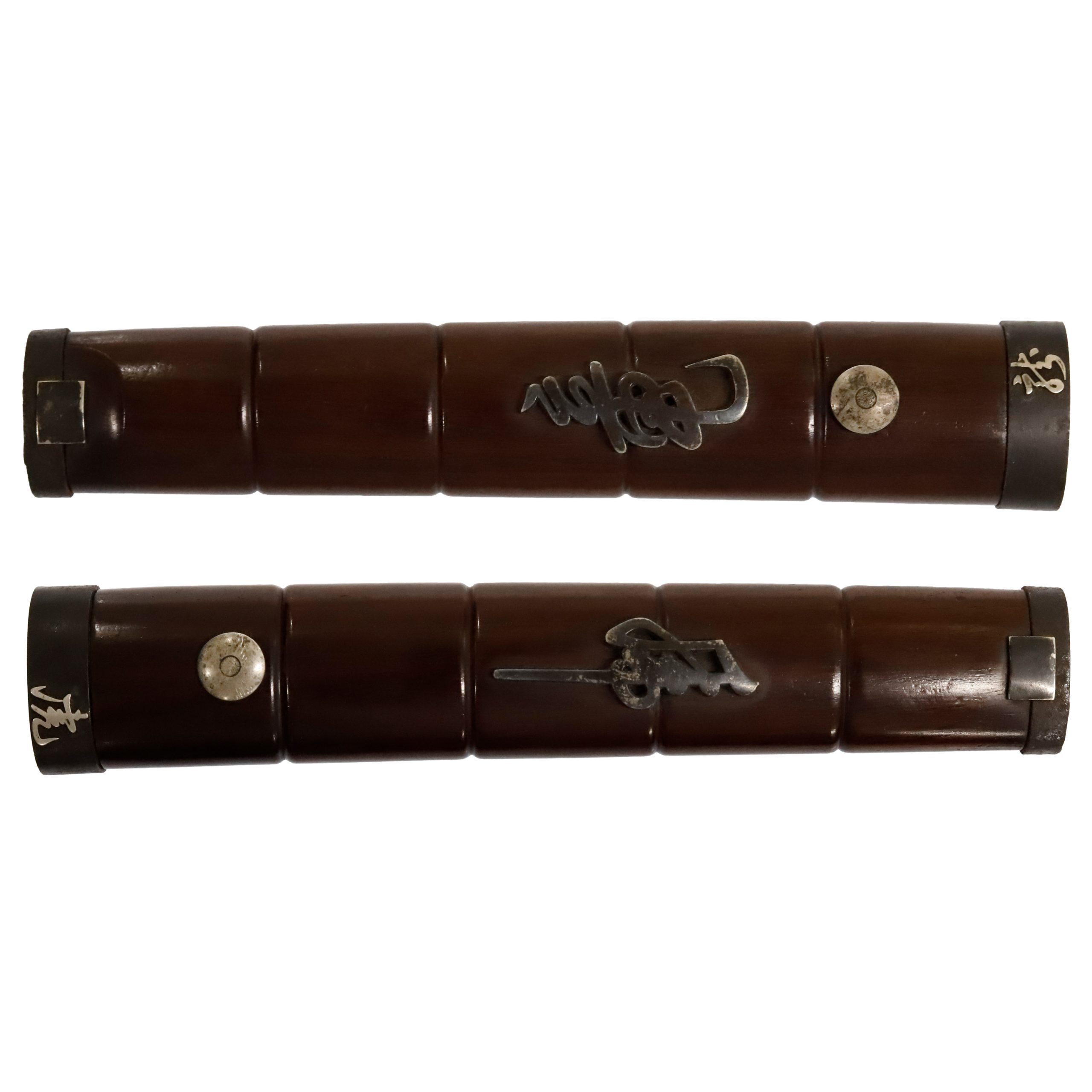 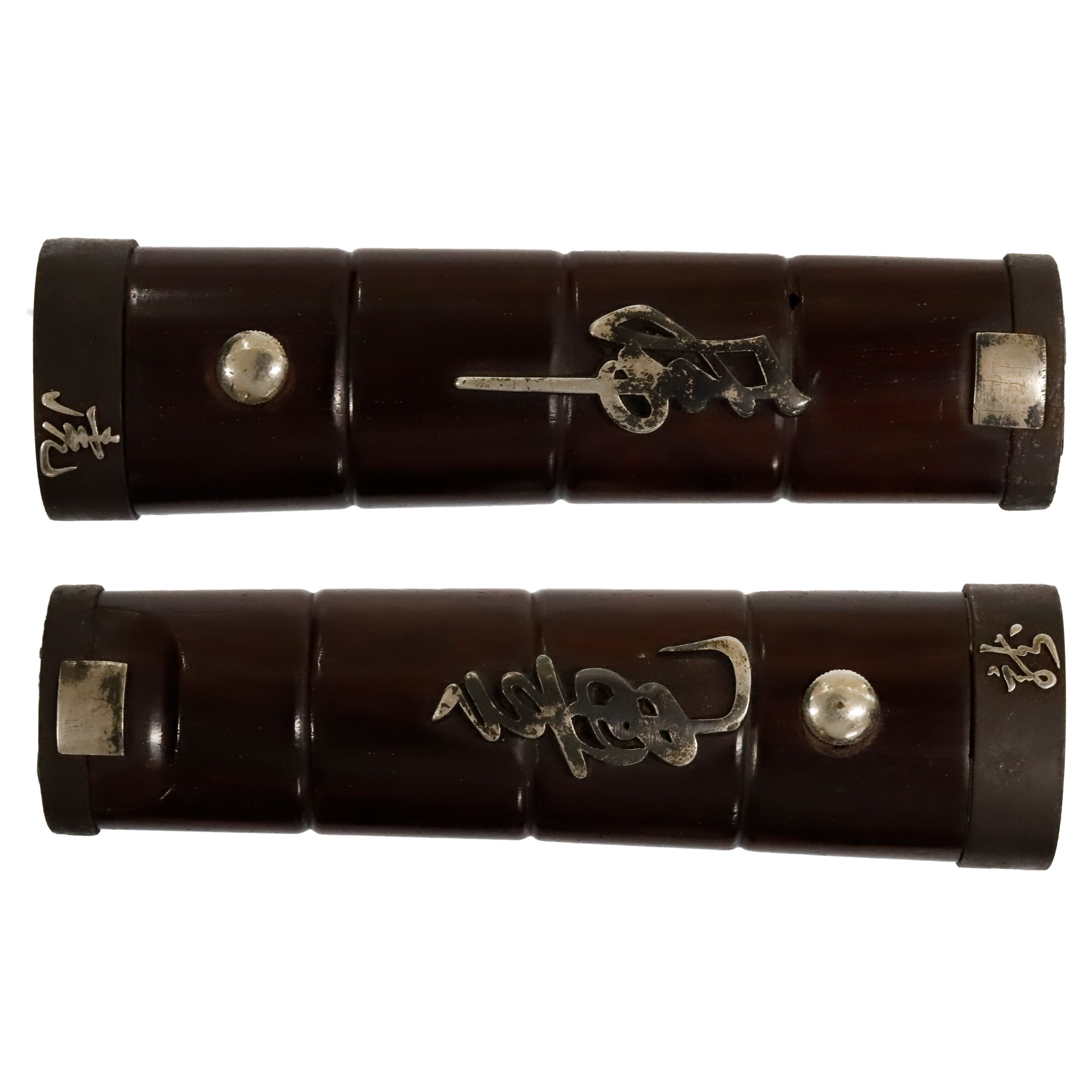 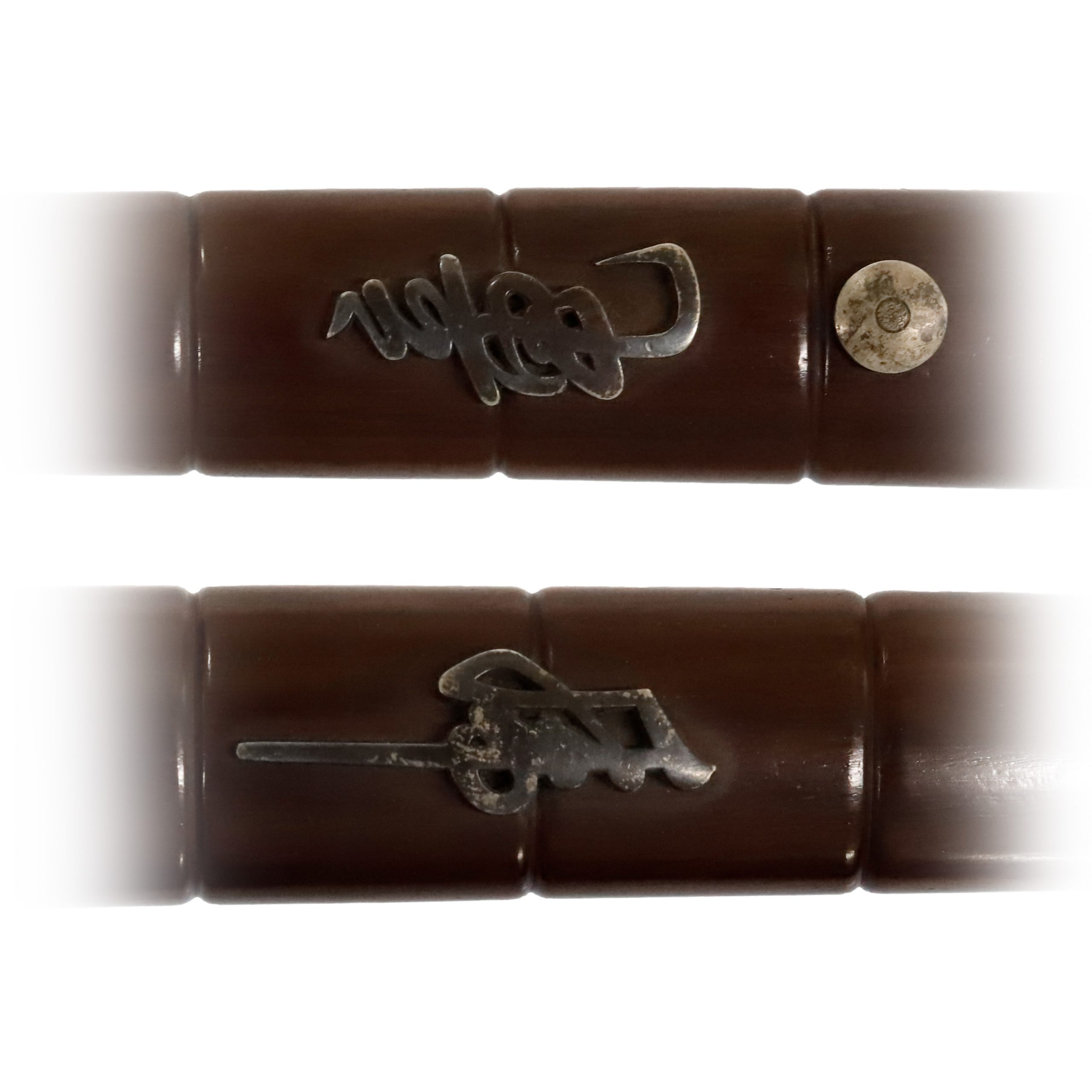 As mentioned above, the exact shape of letters is designed for these Tsubas and Fuchi Kashira. 龍 (We would like to say oriental dragon here), it is initially an imaginary creature found in ancient Chinese traditions or myths. Furthermore, it is a symbolic beast of auspicious signs. Its body is likened to nine animals: antlers are deer, the head is a camel, eyes are demons, the neck is a snake, belly is Mizuchi (蛟, mythical animal in Japan which looks like a snake and have a horn and four legs), scales are fish, claws are falcons, palms are tigers, and ears are cows. It was thought that the dragon would reign at the top of all animals because of its odd-looking appearance. 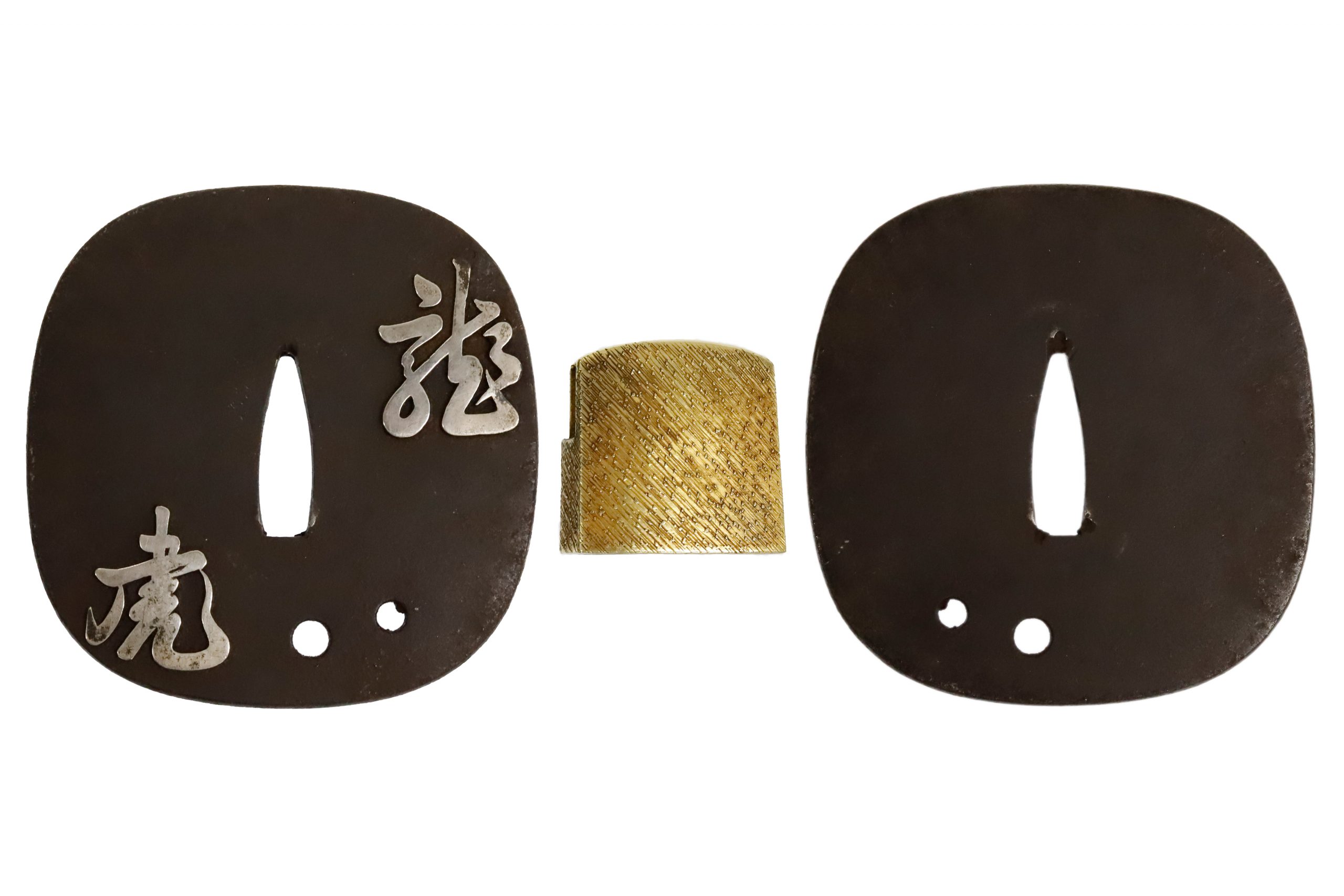 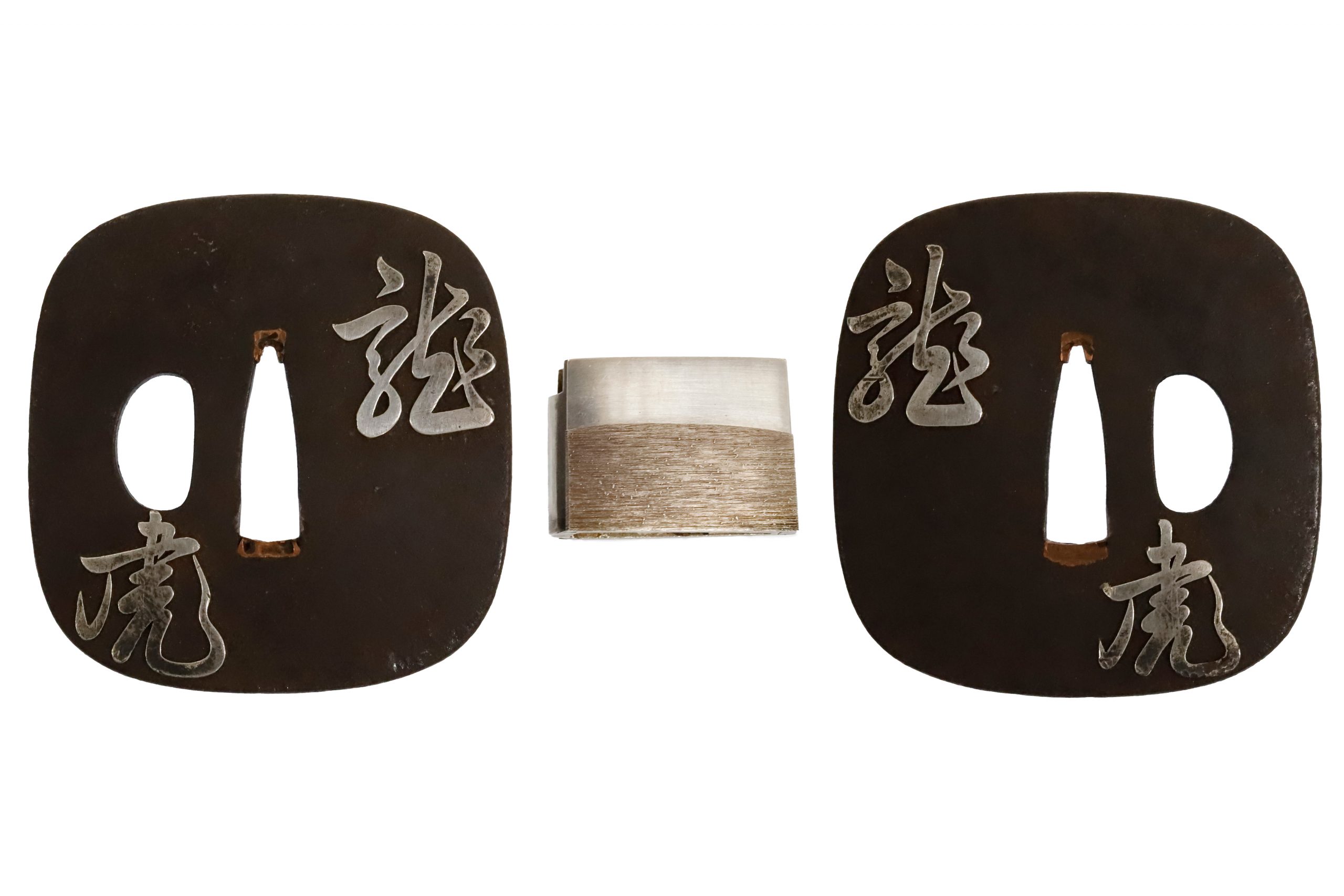 Saya： Saya is the scabbard for the Japanese sword.

Due to the decorative technique of painting, these Sayas have elegant appearances. If you look at pictures by enlarging, you will find that tiny glitters on each Saya. We would guess that its material is seashell. In Japan, there is an ornamental technique that is called Raden (螺鈿). It has been often used for traditional craftworks. It uses the pearl part of seashells and puts it into the engraved surface of lacquer or wood. Thanks to its iridescent luster, it gives a luxurious look to works. 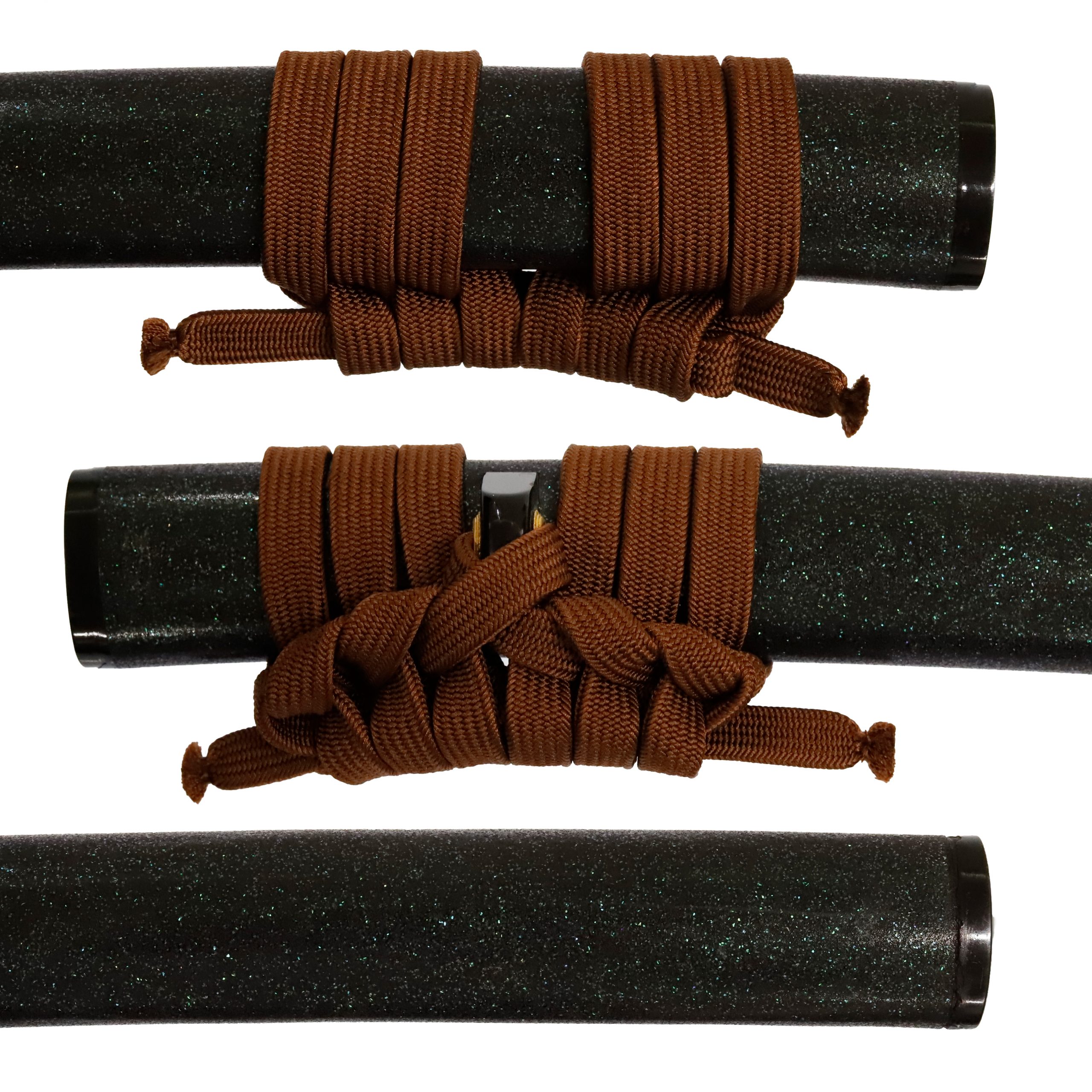 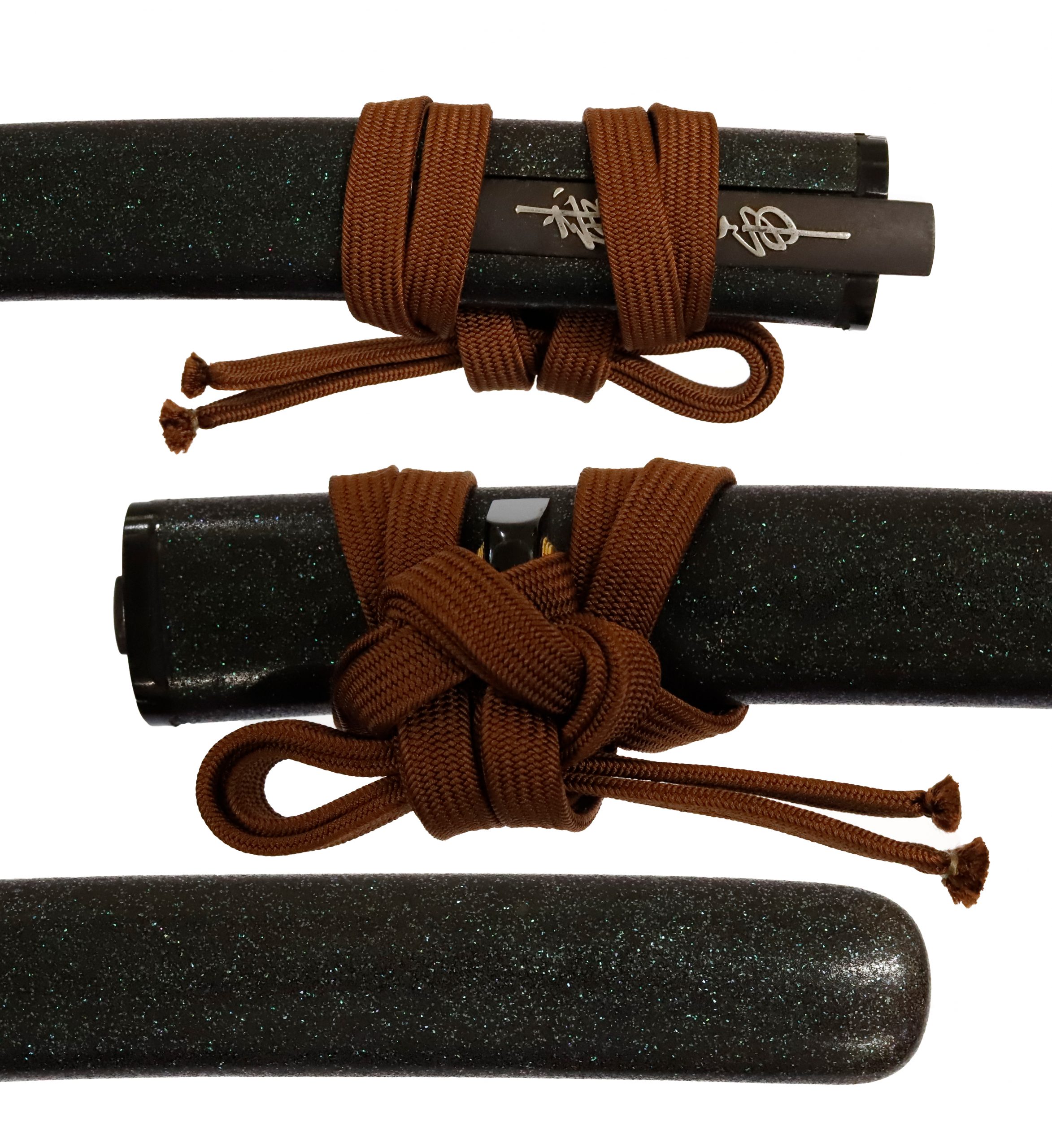 Kozuka：Kozuka is a small knife stored in Kozuka Hitsu(groove of the sheath of the Japanese sword).

Kogatana (tiny knife) is stored in Kozuka. Same as other sword mountings, two Japanese letters are engraved and colored with silvery metal. If these letters expressed 龍 and 虎, we would quote a famous theme of painting; 龍虎図 (Ryu-Ko Zu). It is a combination of dragon and tiger. There is a theory that believes the dragon will bring clouds, and the tiger will make winds. Both of them are regarded as sacred beasts who control the weather. It is said that many Samurais and Zen priests loved this theme from the middle of the Muromachi period. 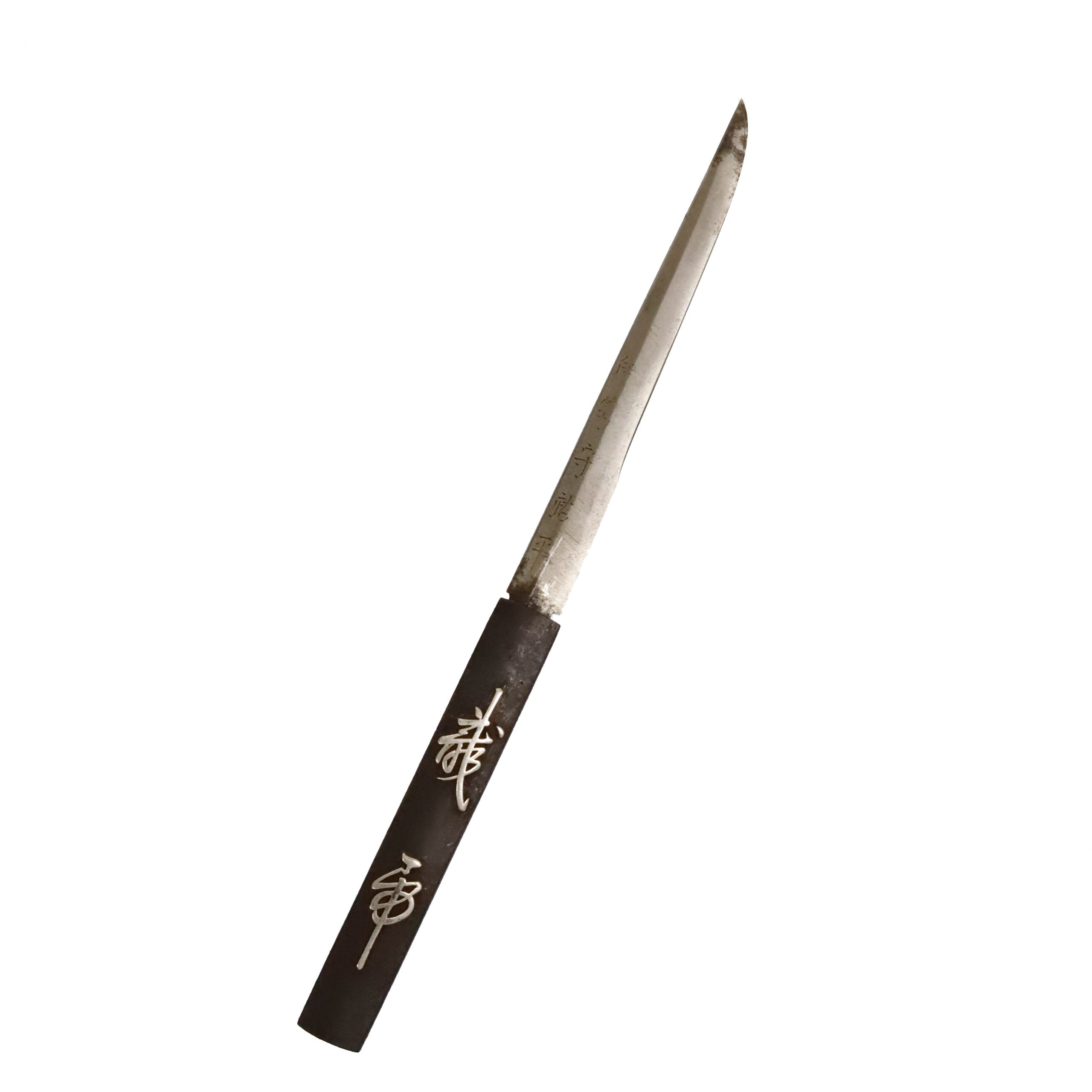 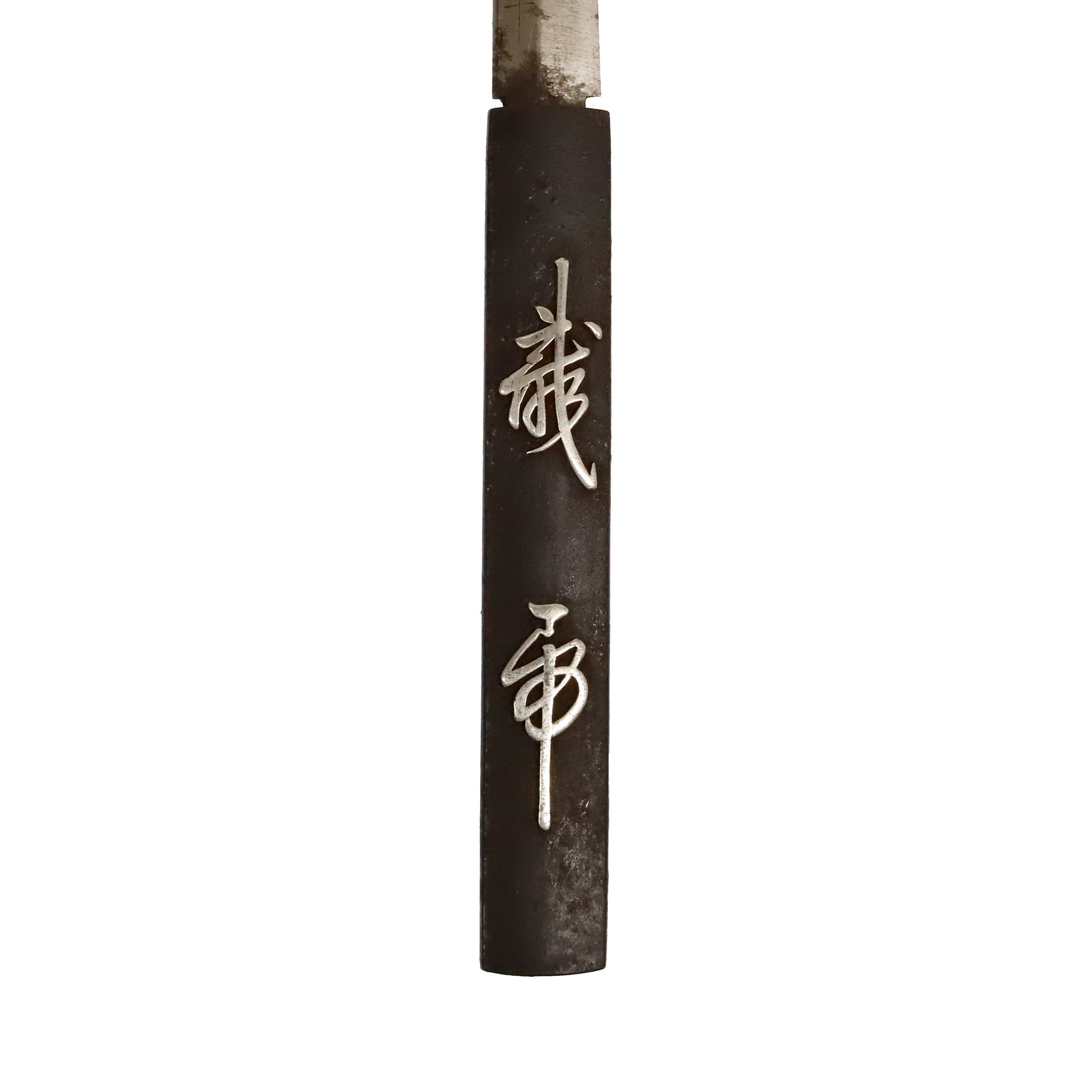 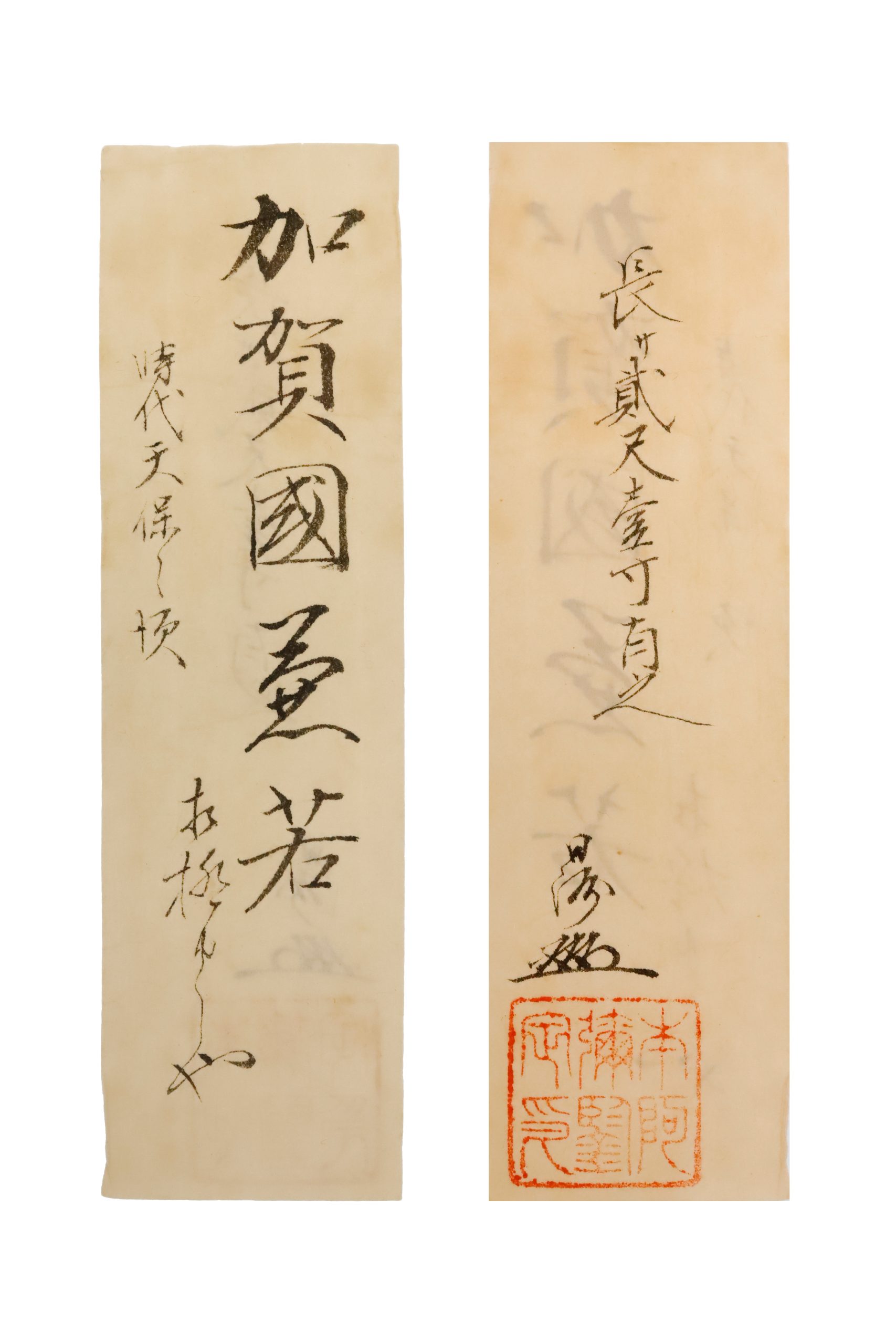 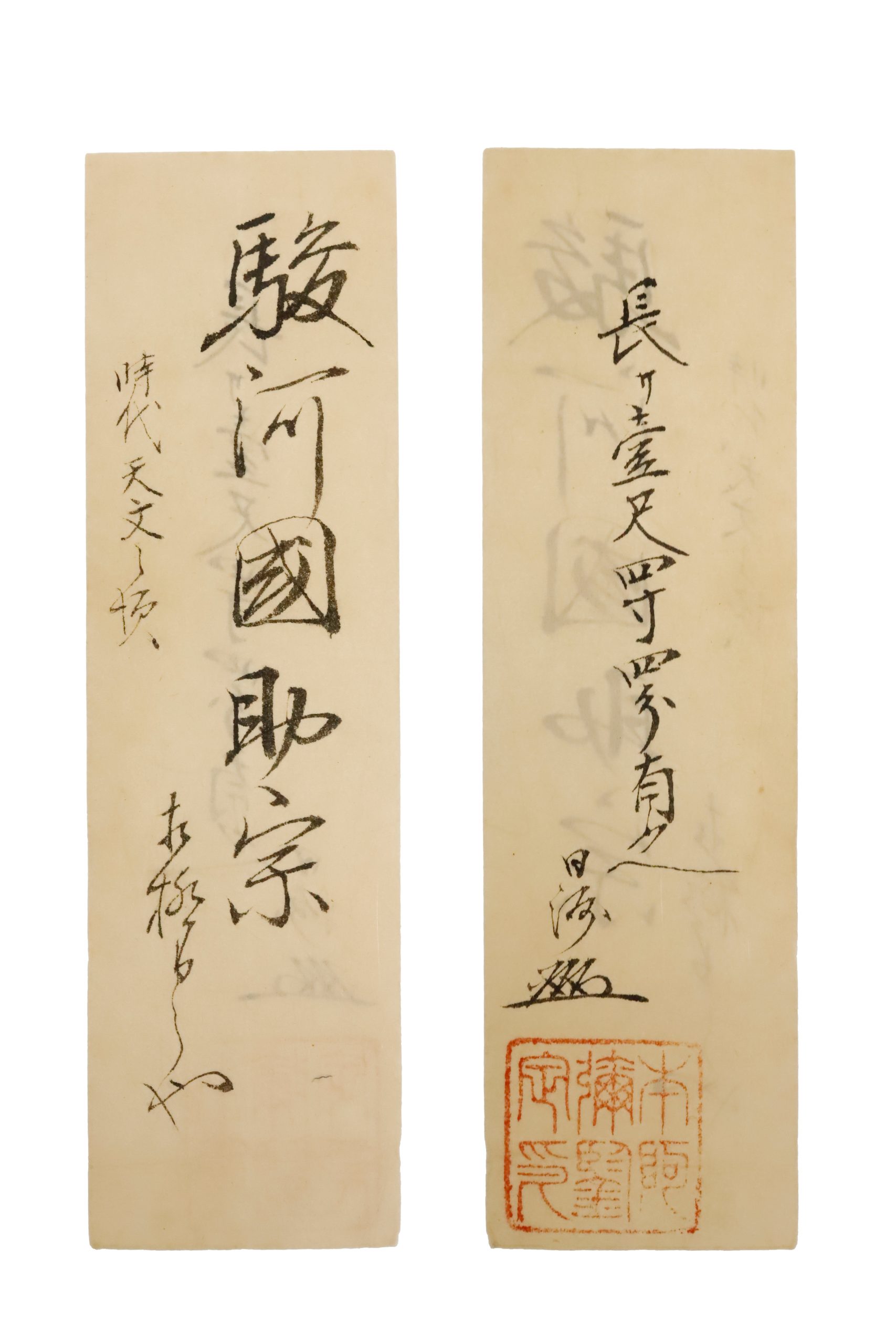 Registration Number : Tokyo 64600,64601
The Board of Education in Tokyo prefecture issued a registration paper for this sword . In order to obtain this paper, the sword needs to be traditionally hand forged. With this paper, its owner can legally own an authentic Japanese sword in Japan. This paper will need to be returned to the board of education when the sword being shipped abroad but you can receive a copy of it. 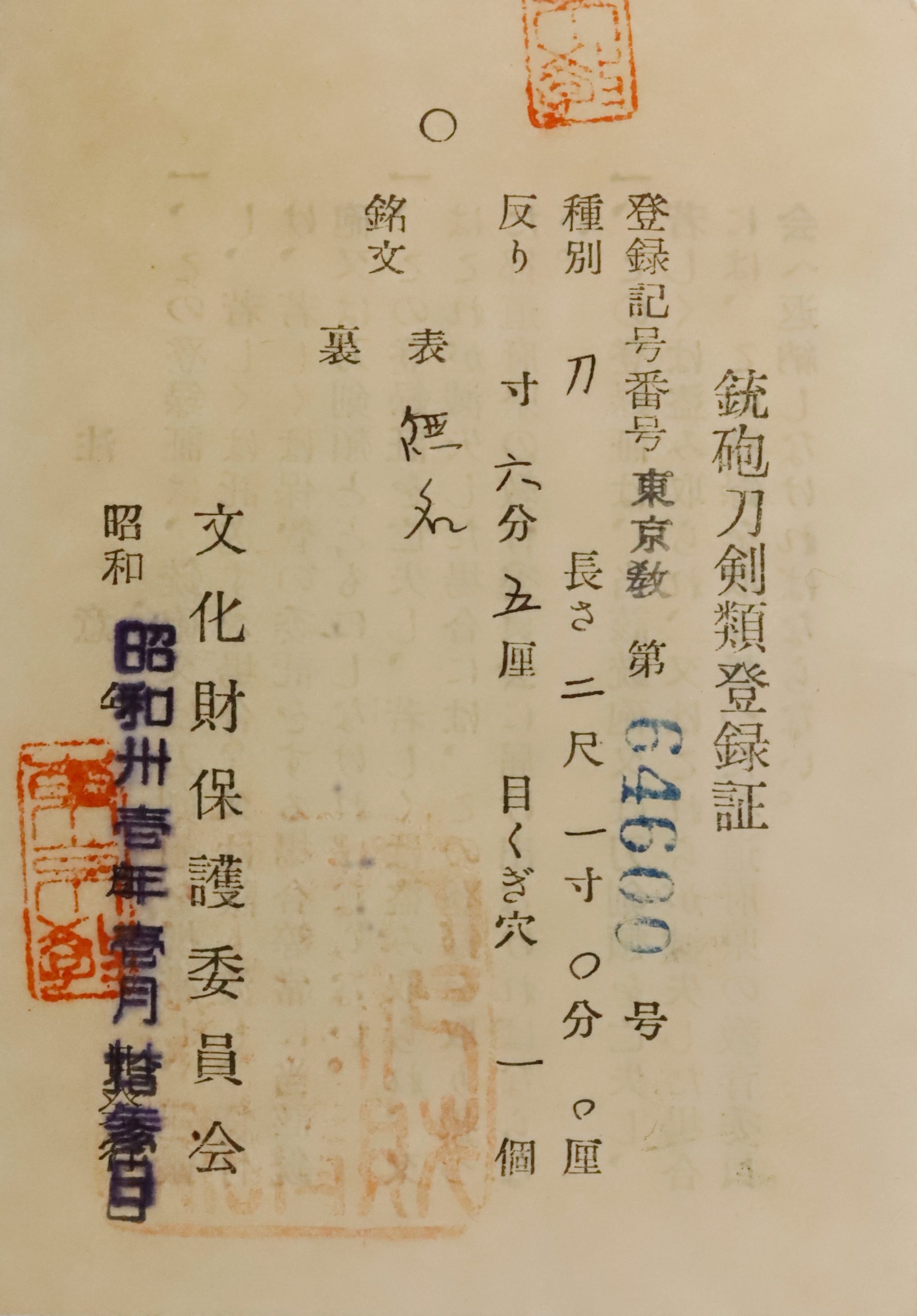 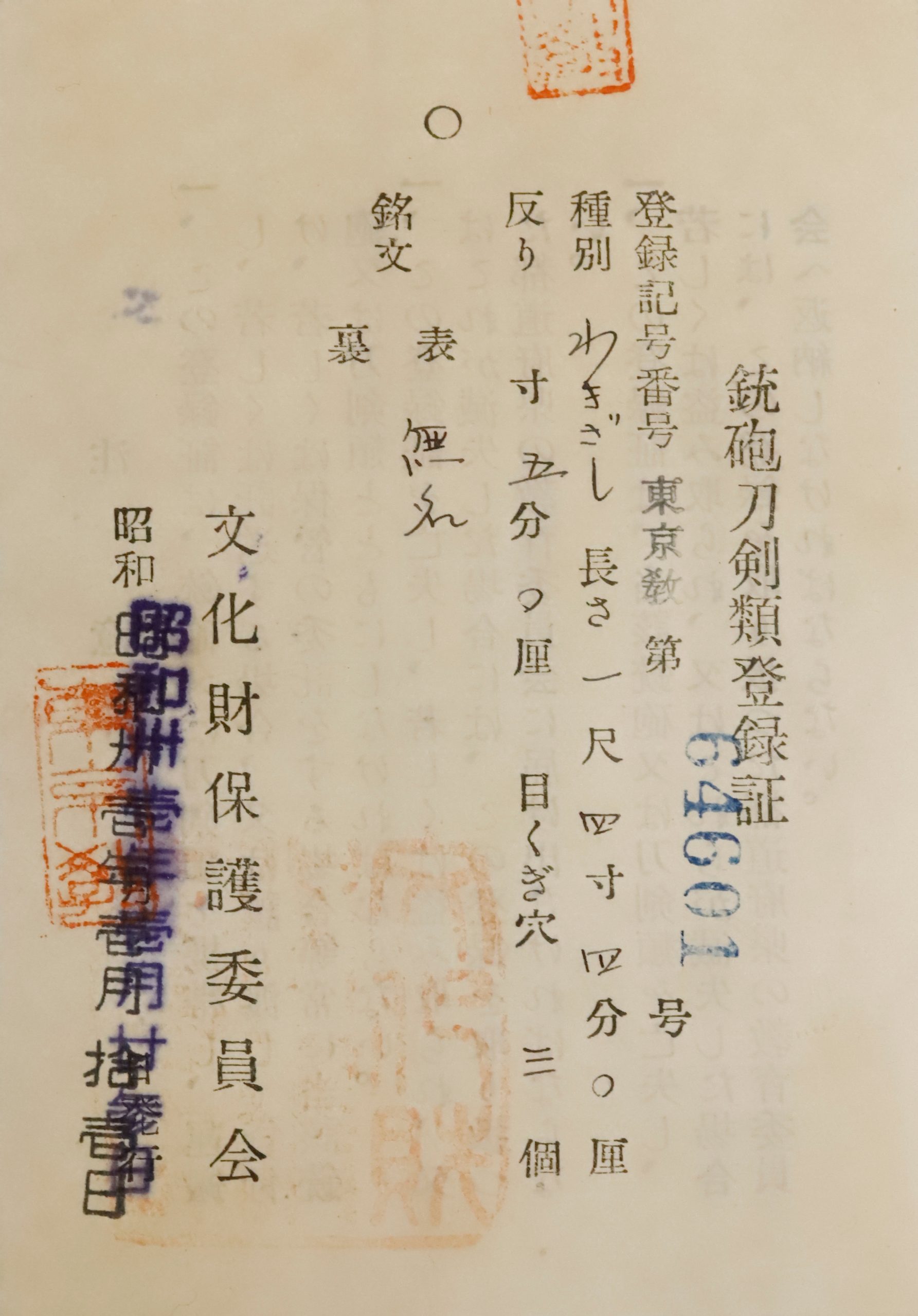 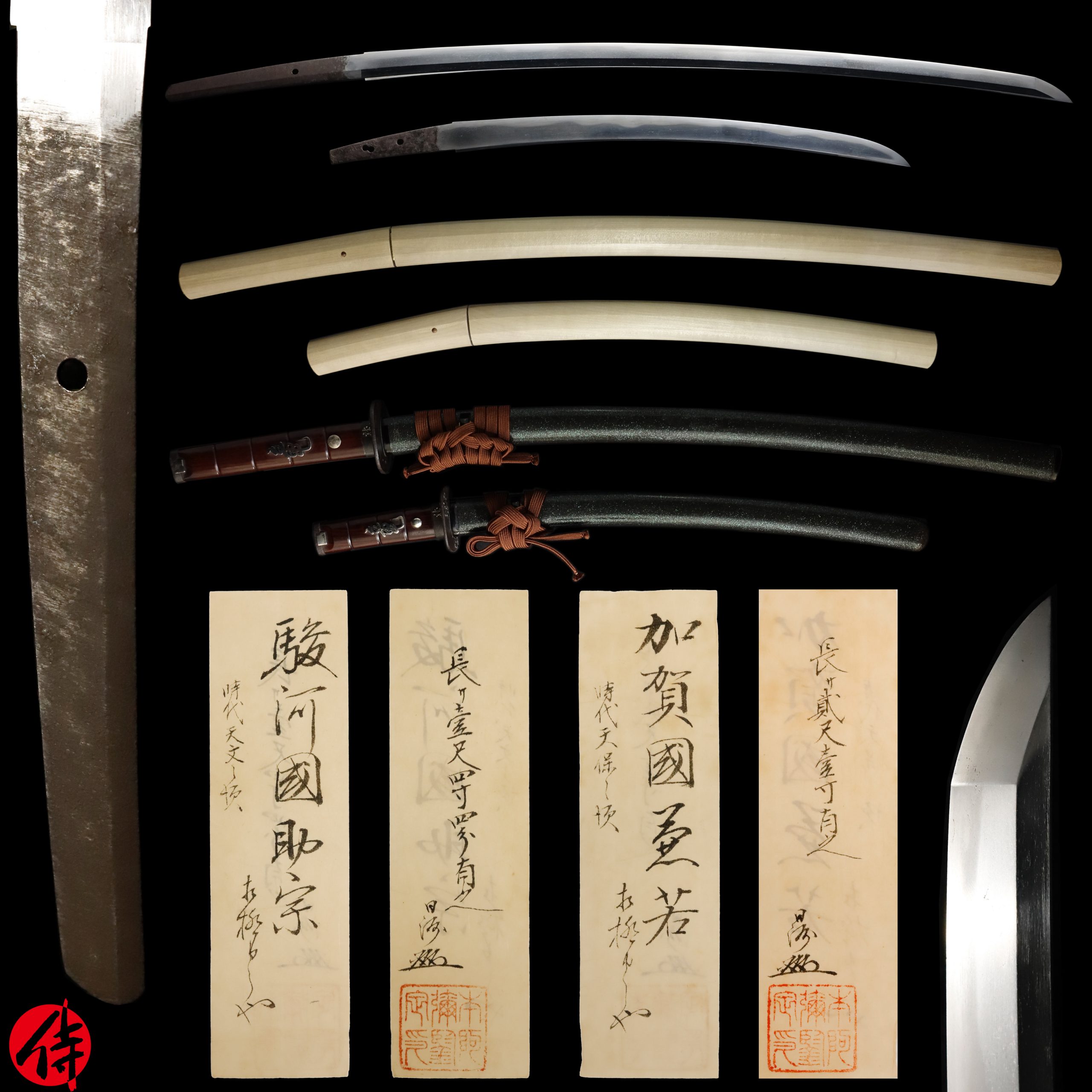 【Japanese Sword& Export Process】
The Japanese swords we deal with are hand-forged edged swords made in Japan. It was made from the traditional carbon steel called TAMAHAGANE(玉鋼). Samurai Museum is familiar with the proper legal procedure for an antique/ authentic Japanese sword to be exported from Japan. We have sent more than 300 Japanese swords to amazing owners who appreciate its historical value.

To legally export the sword from Japan to other countries, we will have to apply for its permit to the Agency for Cultural Affairs(Bunkacho) and return the original registration paper to the Board of Education. It normally takes around 2-4 weeks to receive this permit after submitting required documents. And we would like you to expect at least 1-1.5 months for your order to arrive at your given address after you ordered. For more detailed info, please click here.

【Payment Method】
We accept payment through Stripe(Credit card), PayPal, Apple Pay or ChromePay, all of which are secure payment methods. If you prefer other payment method, please contact us. After confirming your payment, we will apply for an export permit. You may either pay in JPY, USD, AUD, EUR or GBP. The price is set in Japanese Yen. Prices in other currencies are automatically calculated based on the latest exchange rate.

【Shipping】
We have shipped authentic Japanese swords to the USA, Canada, Mexico, UK, Germany , France and Hong Kong. If you don’t live in these countries and like to order, please contact us first before making a purchase. We offer Free International Shipping as long as we can send antique Japanese swords by either EMS or FedEx(Canada).

We will send you a tracking number for your order as soon as we hand it to the post office/FedEx. We will put 100 % insurance on the shipping document without any extra charge. Based on the total amount, there might be a duty tax or other fee for you to pay, depending on the countries. We use package cushioning to protect the item and put it in a PVC pipe, which is one of the most secure packages because of its durability.

【How to make sure the condition】
Please keep in mind that what you are going to purchase is an antique item. We uploaded high resolution photos for you to check its condition thoroughly. If you like to see more photos with different angles, please feel free to contact us. We will be happy to send them to you so that you can make informed decision. It is essential for us to know that you are happy with your choice of a sword. and we are prepared to use the best of our ability to serve you.

【The Art of Nihonto(Japanese Sword)】
Samurai’s history is a profound, eloquent legacy of ancient Japanese warriors in which millions of people worldwide are being fascinated. If you like to find out the art of Nihonto, please click here.