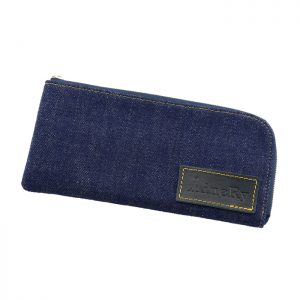 -Card storage space: the back side

What is AineRy?
AineRy is a Okinawa-based denim brand, specializing in denim products that are dyed with the traditional material called Ryukyuai. (the indigo leaves in Okinawa) Using special indigo leaves grown in Okinawa, the producers carefully extract indigo ink and dye fabric many times, which makes the color beautiful and intricate.  Although natural indigo is less common these days due to the rise of cheap synthetic dye, AineRy has been successful to make Ryukyuai (traditional Okinawan indigo) popular again and bring it back to life as a stylish fashion item.  They handcraft high-quality rare denim products while preserving the traditional method to dye fabrics, planting the indigo leaves and cultivating the land for the leaves.  AineRy is a brand that supports preservation of the rich nature of Okinawa and its sustainable growth. They offer you the rigid blue denim, which birthed in the Okinawan nature.

What is Ryukyuai?
Ryukyuai has been grown in Okinawa for centuries and used as dying material. These indigo leaves were essential to make traditional Okinawan textiles. However, as times have passed, natural indigo has become rare following the public’s shift to modern dyes.

To save Ryukyuai from the decline, AineRy was launched and they put in a persistent effort to develop sustainable growth of the local industries in Okinawa based on SDGs philosophy.  As a result, they have reached their successful carrier by reincarnating the traditional Okinawan indigo –  which was on the brink of extinction – in the clothing industry.

Samurai blue comes back to life
Samurai wore dark blue-colored armor that was also known as Kachi-iro (Winning color) in the hope of their victory. Shimazu clan, a feudal family from the Satsuma region(Today’s Kagoshima) had the interaction with the Ryukyu Kingdom and it is said that the indigo dye from Ryukyu(Okinawa) was used to dye fabrics of Samurai armor.
The dye for Samurai armor of old is now used for denim, still carrying the spirits of Samurai.  AineRy, which handcrafts beautiful denim products, cherish Ryukyuai and Samurai Museum is taking a key role to tell the world about their products.