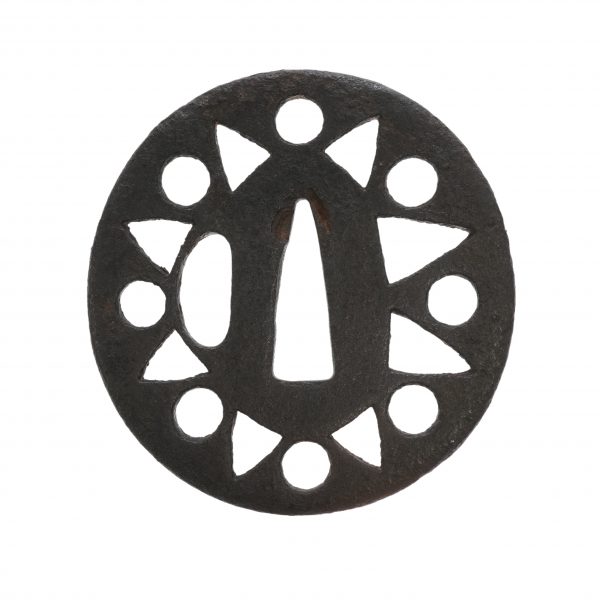 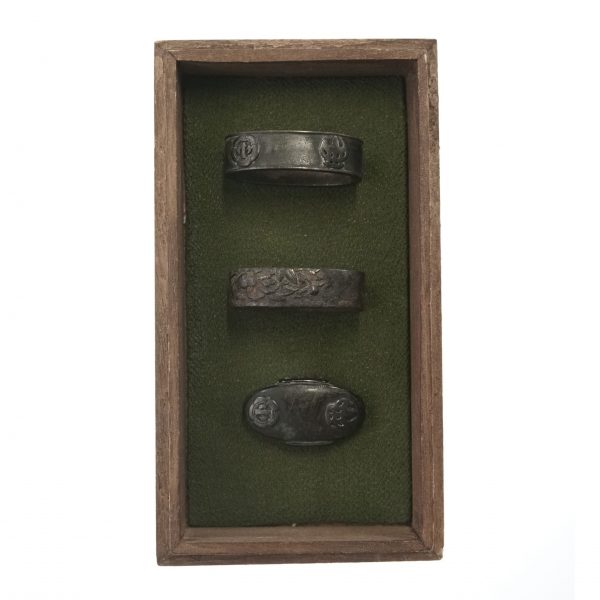 (Fuchi: the thickest, middle-size, the narrowest)

You can enlarge all the photos to see the detail of the item.

Description
Fuchi made of copper. Usually, Fuchi Kashira combines one Fuchi and one Kashira, but this item contains three Fuchi parts. Please pay attention to the fact that the Kashira part is not included. Each of them was probably made for a different Japanese sword, and even its creator is a different person by seeing its signature. The thickest Fuchi might describe a battle because Samurai engraved on it looks he has just jumped into the ship. He wears gorgeous Samurai armor so that he is a high-ranked Samurai. Waves are engraved as a whole, so this Fuchi shows an emotional and uplifting feeling.

Do you know Minamoto no Yoshitsune? He was a general Samurai of the Minamoto family, and his brother, Minamoto no Yoritomo, opened Samurai’s military government and started the Samurai period. There was a very famous battle which is called the Dan-no-ura war and happened in 1185. This battle was about the Minamoto family fought against the Taira family to seize power. Eventually Minamoto family won the battle. At the end of the fight, a general Samurai of the Taira family tried to attack Yoshitsune and jumped on Yoshitsune’s ship.
However, Yoshitsune jumped from ship to ship and disappeared. Yoshitsune was called the genius of battle and has been popular even today. It is possible to imagine that this Fuchi might describe his legend.

Two other Fuchi flowers and plants. A lion and chrysanthemums are engraved on the narrowest Fuchi, and its base is decorated with “Nanako Ji” technique.

Why is it that the sword mounting was important for Samurai?
The sword mountings of the Japanese sword have many kinds of decorations such as handguards (Tsuba), sword hilt (Menuki), pommel (Fuchi Kashira). The Japanese sword not only worked as a weapon but also as an object to show who he was. For example, it shows their personalities and beliefs. You could say that it is like decorations for smartphones today. We recommend you zoom in the pictures of the sword fittings. When you do so, you can see the skill of Japanese metal engraving techniques. They are mainly made of iron and copper with inlays of gold, silver, and bronze. When it comes to handguard (Tsuba), each one has a different outline and weight. These sword fittings that have lived with Japanese swords in the same age might be worth as much as the Japanese swords. They are inconspicuous parts of the Japanese sword. Yet, if you are knowledgeable or particular about it, you will become a connoisseur of the Samurai.

Payment method
We accept payment through Stripe (Credit card) or Paypal. If you prefer other payment method, please contact us. After confirming the payment from you, we will apply for an export permit. You can either pay in Japanese Yen or US Dollars. The price is decided in Japanese Yen. The price in US dollar is calculated automatically based on an exchange rate.

Shipping Duration
We ship via EMS (Japanese Postal Service). It normally takes at least 5-14 days to receive any packages after you place an order.
It might take longer depending on the season or custom clearance. We will inform your order’s tracking number via email.

*Please keep in mind there is a significant delay expected in delivery with EMS in some countries due to the pandemic in the world. We offer free shipping only when we can ship by EMS. Therefore, if you like us to ship with a different shipping carrier such as UPS, we will charge additional costs. If you want to know the detail of shipping, please feel free to contact us.

How to make sure the condition
We uploaded high resolution photos for you to check its condition thoroughly. If you like to see more photos with different angles, please feel free to contact us. We will be happy to send them to you so that you can make informed decision.

Would you like see some more Fuchi Kashira for sale? Please check the link below. We hope you can find your favorite Fuchi Kashira.
https://www.samuraimuseum.jp/shop/product-category/decorations/fuchigashira/