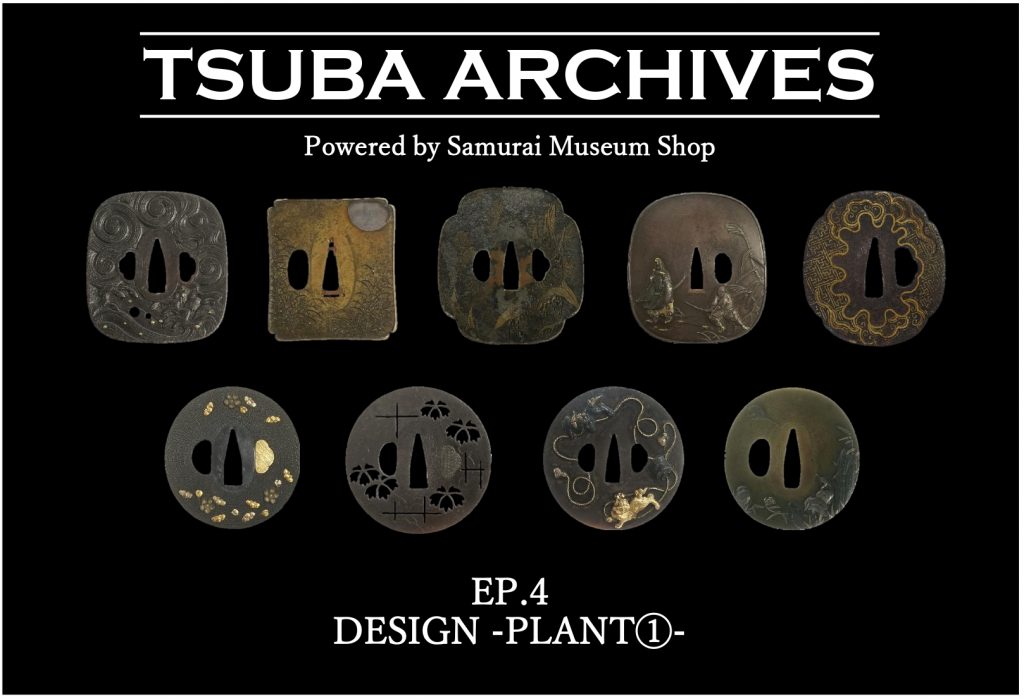 From this time, we would like to see plant designs. We are planning to write about this category in two chapters. We hope you will enjoy and find your favorite motif. 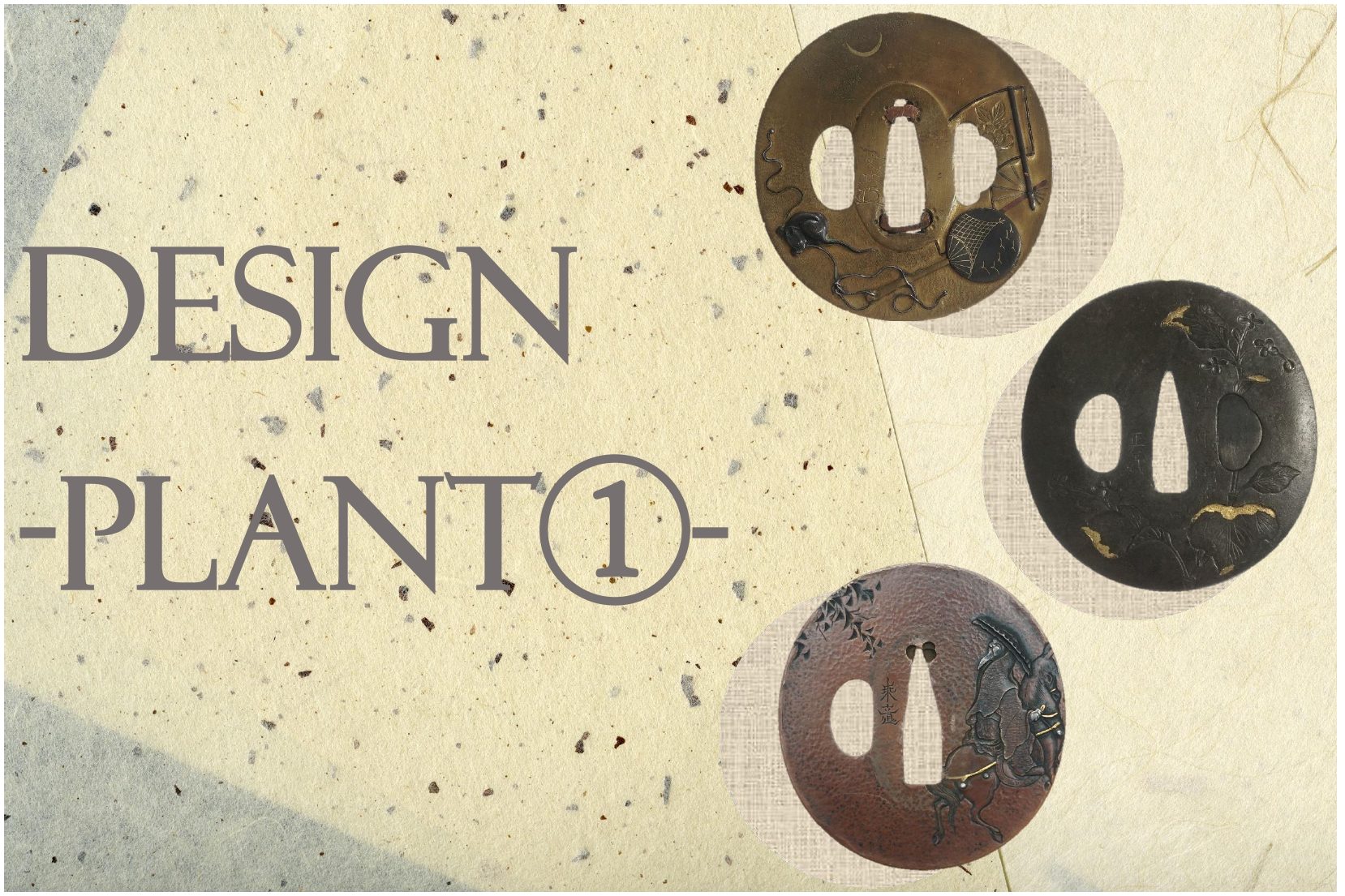 Cherry blossom is one of the seasonal things of spring, and it has been loved for a long time in Japan. Its pattern is designed not only for sword mountings but also for Kimono (着物, traditional Japanese costume) or furnishings. One theory says that the god of grain exists in cherry blossoms. Therefore, this flower pattern has been treated as the symbol of a plentiful harvest. People held a traditional custom under cherry blossom trees to pray for a bumper year in ancient times. It is said this is the origin of the cherry blossom viewing picnic today.

Japanese apricot blossoms begin to bloom in winter that snow still covers its tree so that people thought this flower tells the arrival of spring. Same as cherry blossom, it has been appreciated for a long time in Japan. People enjoy its adorable petal shape and scent, gracefully branched tree, and compose many poems. As it comes out in the cold season, it symbolizes the power of perseverance and vitality.

A long time ago, the chrysanthemum was used as a medicine for obtaining a long life in China, and it was brought to Japan with this thought in the Nara period (648-781). Chrysanthemum is one of the flowers which symbolizes fall, and people appreciate it very much since ancient times. As its petals form radially, the chrysanthemum has been likened to the sun. That is why this flower pattern is treated as the symbol of perpetual youth and longevity or good health. “Kiku no Gomon (菊の御紋)” is a kind of chrysanthemum pattern, and it has been used as the crest of the Emperor and the royal family in Japan so that it is well-known as a noble pattern.

From the Kamakura (1185-1333) period to the Warring States period (1467-1615), the chrysanthemum crest was given as a reward from the  Emperor back then to the warlords who made significant contributions. For example, Ashikaga Takauji (1305-1358), who became the first Shogun of the Muromachi Shogunate, cooperated with Emperor Go-Daigo (後醍醐天皇, 1288-1339) to dissolve the Kamakura Shogunate. And Takauji was given a chrysanthemum crest.

In addition, Toyotomi Hideyoshi (1537-1598) was also given a chrysanthemum crest by Emperor Goyouzei. A theory says Hideyoshi was delighted and used this motif for furniture. At that time, the Emperor was regarded as God. Therefore, it was an irreplaceable honor for Samurais to receive the family crest from the Emperor. This is how the chrysanthemum pattern has a deep connection with Samurai culture.

There is a popular design that is called Kikusui Mon (菊水紋). It depicts chrysanthemum flowers floating in running water. Since a long time ago, the Kikusui Mon has been known as a design that represents longevity based on a Chinese legend. It says we could extend our lifespan by drinking water flowing from the chrysanthemum colony. Therefore, people treated this design as a kind of good luck motif. It is said this pattern started to be used in the Kamakura period (1185-1333). Some families used it for their family crests. Kusunoki Masashige (楠木 正成, 1294?-1336) is one of them. He contributed to the defeat of the Kamakura Shogunate and was given the chrysanthemum flower crest by Emperor Go-Daigo in recognition of his remarkable achievements. However, Masashige chose to use the Kikusui Mon, the water flowing in the lower half of the chrysanthemum flower. According to a theory, it was because he thought it was too presumptuous to have the same crest as the Emperor.

This is how the chrysanthemum pattern has a deep connection with Samurai culture.

Would you like to check current chrysanthemum-designed Tsubas on sale? Please click the link below.
Chrysanthemum | Samurai Museum Shop

Peony represents happiness, wealth, nobleness, and gorgeousness. This flower pattern has been treated as a kind of good-omen motif; people regarded it as a rich harvest sign. Peony is called “Botan” in Japanese. When we write this flower’s name in Japanese, its second letter means mountain hermit medicine that would give us eternal youth. Based on the meaning of this letter, the peony pattern symbolizes eternal youth and longevity.

Petals are designed in a rhombus. This pattern became a Yusoku Monyou (有職文様, generic term for designs of court nobles’ clothing or furnishings, these designs have unique and elegant styles) during the Heian period (794-1185). And people loved it as an auspicious pattern.

A pattern in which stems and leaves of vines are twined and make curves. Since ivy has a strong vitality and grows up without interruption, people regarded this design as a symbol of prosperity and longevity. Vine is called Tsuru (蔓) in Japanese, and it has another pronunciation; “Man.” There is a word 万 (it is also read Man), which means ten thousand. In the Karakusa pattern, leaves and vines are connected like Obi (帯, belt). The word “帯” can also be read “Tai.” Due to its pronunciation, the term “代 (Tai)” is associated. From this word-association game, an idiom 万代 is associated, and it means a thousand generations. In other words, we could imagine that people used this design wishing prosperity and longevity for their clans for a long time.

It is a plant pattern in which each stems branches and has characteristic heart-shaped leaves.

Today, the Aoi-Domoe / Mitsuba-Aoi-no Mon (葵巴/三つ葉葵の紋 ) is known as the family crest of Tokugawa Shogunate family led by Tokugawa Ieyasu, a famous military commander of the Warring States period. This plant pattern has also been used for the crest of the Kamo shrine in Kyoto prefecture. As mentioned above, the famous Shogunate family, the Tokugawa family, had their family crest with three leaves of Aoi due to the relationship with the Kamo shrine. As its leaves have a habit of always facing the sun, and the word “Aoi” is taken as “Aogu (仰ぐ, looking up)” for the sun, people thought the Aoi pattern would bring good fortune.

We are going to update new episodes about plant design. We will see you in the next episode.