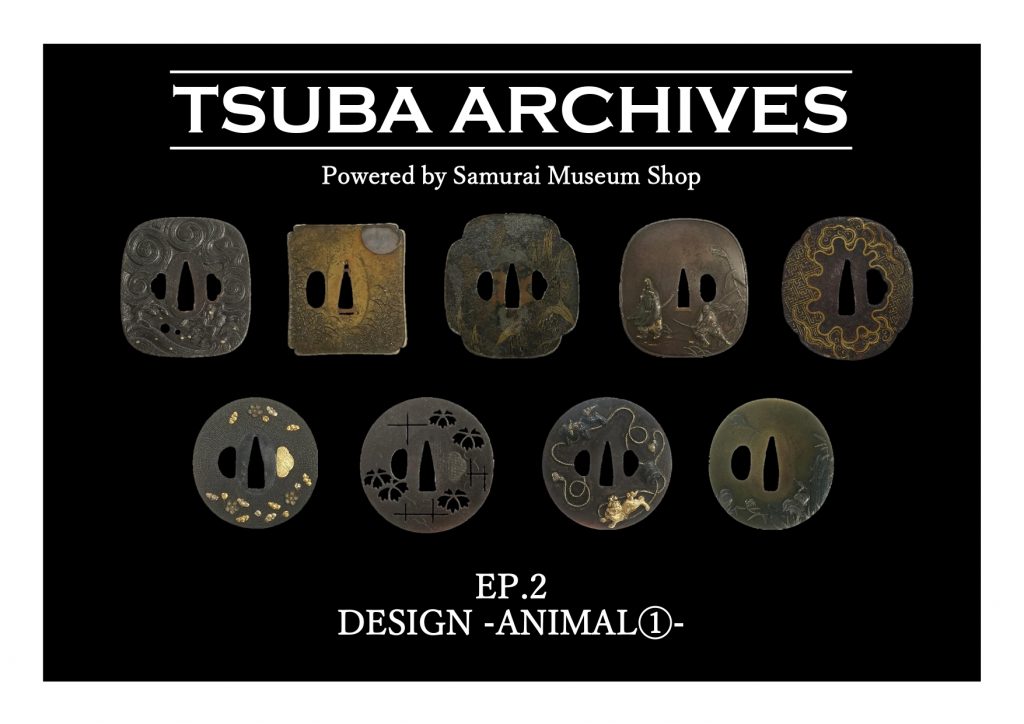 Divers motifs are designed on Tsuba. Samurai’s wishes or tastes appear in each design. Do you think it is one of the pleasures to imagine it when you enjoy Tsuba, don’t you? We could infer the lives of people at that time by appreciating a small canvas: Tsuba. We hope that you will find your favorite pattern. This time, we are going to introduce you to animal designs. 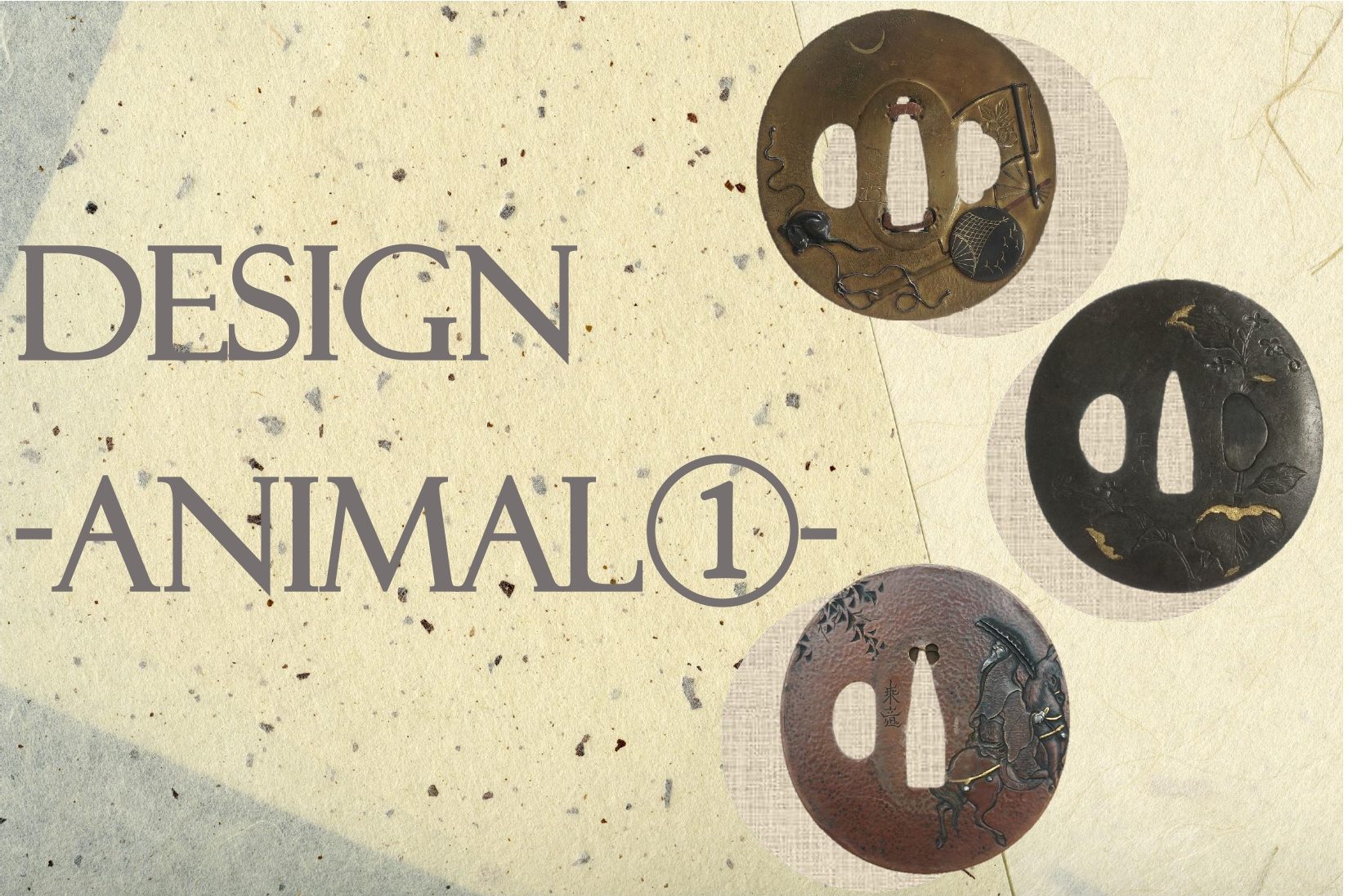 Initially, the dragon is an imaginary creature found in ancient Chinese traditions or myths. Furthermore, it is regarded as a symbolic beast of auspicious signs. Its body is likened to nine animals: antlers are deer, the head is a camel, eyes are demons, the neck is a snake, belly is Mizuchi (蛟, mythical animal in Japan which looks like a snake and have a horn and four legs), scales are fish, claws are falcons, palms are tigers, and ears are cows. It was thought that the dragon would reign at the top of all animals because of its odd-looking appearance.

In ancient China, the dragon pattern was used for emperors’ clothing so that people strictly defined its shape or even the number of nails. On the other hand, the dragon pattern does not have detailed rules to represent classes in Japan. However, still, it maintains its meaning as the all-purpose auspicious pattern.

Also, in Japan, there is a belief that worships dragon as a water god and is called Ryujin Shinkou (竜神信仰). Since rice cultivation flourished in this country, water is always an essential resource. Therefore, the dragon motif has been familiar to Japanese people since a long time ago.

It is a fish with a large head and mouth, two beards, and a slimy body without scales. Catfishes are nervous and delicate, so they react sensitively to small shakes and violate or jump. For that reason, after the middle ages in Japan, people thought that a catfish was the cause of earthquakes because they could feel tiny shakes that nobody could realize. The catfish pattern was described often in the Edo period. About catfish, there is a famous theme of ink painting that is called Hyoune Zu (瓢鯰図). It depicts a man trying to keep Namazu (鯰, catfish) with Hyoutan (瓢箪, gourd). It is a question and answer of Zen Buddhism. It is thought this theme came from the proverb that means to succeed having difficulty. Since the motifs of sword mountings sometimes reflect the taste of its owner or his view of religion, the owner of the Tsuba with catfish motif was possibly involved in Zen Buddhism.

As its name suggests, the Kikkou pattern describes a turtle’s shell. It is a continuous geometric pattern connecting regular hexagons up and down. According to a theory, this design was brought from China and the Korean Peninsula in the Asuka (592-710), Nara period (710-794). A proverb says turtles live a long life; therefore, turtle and turtle’s shell pattern represent longevity. In addition, as this continuous hexagonal pattern does not get out of its shape, it is said people wished for eternal prosperity by using this design. When this design was brought to Japan, it was monopolized by the aristocracy so that ordinary people even could not see it. It was such a prestigious design at that time. The Kikkou pattern was applied to various items such as Kimono (着物, traditional Japanese costume), Obi (帯, belt for Kimono), porcelains, etcetera. Samurais started using the Kikkou pattern in the Kamakura period (1185-1333), and it has become widely known among the general public.

This pattern is a combination of different types of seashells. It is often designed with a seaside scene or wave pattern. You would feel the refreshing atmosphere of summer. Bivalves, especially clam, its shells cannot be combined with any other clam’s frame; therefore, its pattern represents happy marriage.

Seashell is called Kai (貝) in Japanese. Because of its pronunciation, the seashell has another meaning. There is a word Yarigai (やりがい, worthwhile). As a part of this word has the same accent as Kai (貝 is read Gai in some cases), Japanese people found this meaning. Also, since seashells are hard and combine only with their pair, people thought it represented a robust defense. Due to these meanings that inspire warriors who go to the battlefields, Samurais might have loved this motif.

Horses have been around human life for a long time, not only as our food but also for transportation or carriage of luggage. In Japan, horses were thought of as vehicles for gods to be dedicated to shrines in ancient times. It is said it is the origin of Ema (絵馬, picture tablet used as an offering at a shrine) today. Horses had been used as a tool for rituals and festivals. After the age that Samurai appeared, wearing large armor or performing archery riding a hose became martial arts. Equestrian tactics became the pillar of military action and security activities. According to a theory, that is why the Japanese sword began to have a curve to make it suitable for slashing (the Japanese sword was straight in the beginning).

The Inome pattern has been used since ancient times, and it looks similar to the heart mark. As its name implies, the boar’s eyes are the origin of this pattern. Some people believed that the Inome design would work as an amulet to protect them from evil spirits or fire. Also, it is said it would bring good luck. This pattern is often found in traditional Japanese architectures such as shrines or temples and used Gegyo (懸魚, decoration under the roof, where the roof is jointed) or metal fittings for hiding timber joints.

The tiger is a brave animal. A theory says people considered the tiger pattern would protect people from evil spirits. Therefore, its pattern has been treated as a talisman. The tiger design has also been regarded as the symbol of life activity when “tiger” is written by a Japanese Kanji character (漢字, a kind of Japanese letter) based on its meaning. It is said people wished boys’ healthy growth by using the tiger pattern.

We are going to update new episodes about animal design part 2. We will see you in the next episode.